An Introduction to Information Theory: Symbols, Signals and Noise, by John R. Pierce, says the following:

In 1917, Harry Nyquist came to the American Telephone and Telegraph Company immediately after receiving his Ph.D. at Yale (Ph.D.’s were considerably rarer in those days). Nyquist was a much better mathematician than most men who tackled the problems of telegraphy, and he always was a clear, original, and philosophical thinker concerning communication. He tackled the problems of telegraphy with powerful methods and with clear insight. In 1924, he published his results in an important paper, “Certain Factors Affecting Telegraph Speed.”

Here K is a constant whose value depends on how many successive current values are sent each second. The quantity log m means logarithm of m. There are different bases for taking logarithms. If we choose 2 as a base, then the values of log m for various values of m are given in Table II. 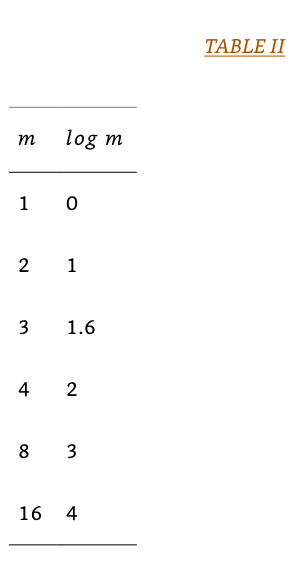 We can easily see by means of an example why the logarithm is the appropriate function in Nyquist’s relation. Suppose that we wish to specify two independent choices of off-or-on, 0-or-1, simultaneously. There are four possible combinations of two independent 0-or-1 choices, as shown in Table III. 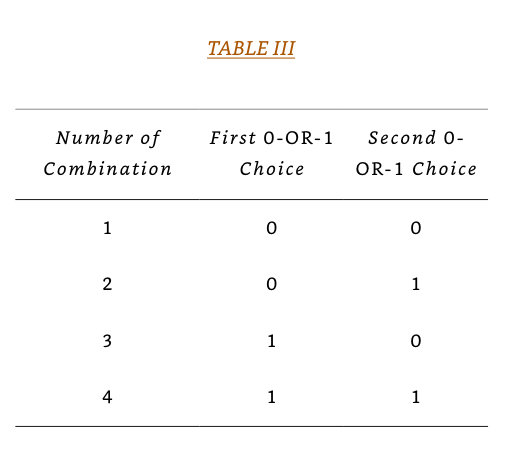 Further, if we wish to specify three independent choices of 0-or-1 at the same time, we find eight combinations, as shown in Table IV. 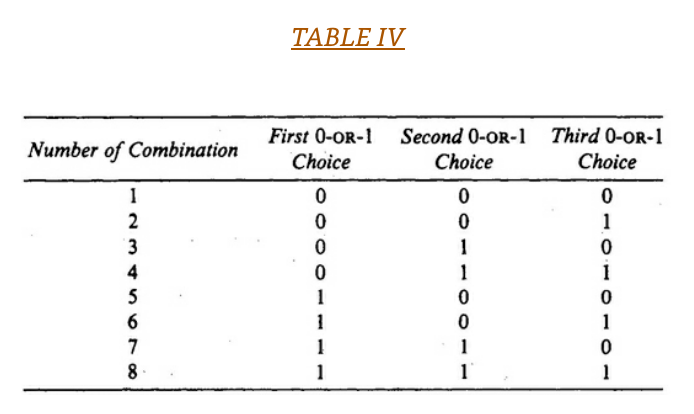 Thus, the logarithm of the number of symbols is just the number of independent 0-or-1 choices that can be represented simultaneously, the number of independent messages we can send at once, so to speak. Nyquist’s relation says that by going from off-on telegraphy to three-current ( + 1, 0, – 1) telegraphy we can increase the speed of sending letters or other symbols by 60 per cent, and if we use four current values (+3, +1, – 1, – 3) we can double the speed. This is, of course, just what Edison did with his quadruplex telegraph, for he sent two messages instead of one. Further, Nyquist showed that the use of eight current values (0, 1, 2, 3, 4, 5, 6, 7, or +7, +5, +3, +1, – 1, – 3, —5, – 7) should enable us to send four times as fast as with two current values. However, he clearly realized that fluctuations in the attenuation of the circuit, interference or noise, and limitations on the power which can be used, make the use of many current values difficult.

In the last paragraph, the following claims are made by the author:

Let's start off by defining our variables:

m is the number of different symbols or current values available.

M is the number of independent 0-or-1 choices.

possible combinations of the M independent 0-or-1 choices.

which is consistent with table II.

This is double the value from 2-current telegraphy. Again, so far as good.

I would appreciate it if people could please check my work to see whether the author has made an error. If not, please explain where I went wrong.

Funnily enough if you search "Certain Factors Affecting Telegraph Speed." in the usual online sources, you will find the original text by Nyquist.

It includes a table:

so the mistake is, as expected, not Nyquist's.

Not the answer you're looking for? Browse other questions tagged current telecommunications or ask your own question.

12
If one sends short bursts of electric current that abruptly turn on and off, why does the receiver receive a smoothed-out current?