Where would Iceo flow through and would it cause thermal runaway?

I was reading this page about thermal run away. 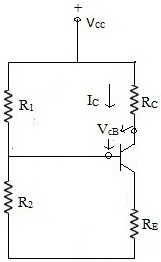 Due to increase in the temperature of collector junction, Ico will increase, Vbe will decrease.

But for Ico to increase Ic and Ie, the Ico has to flow through the base-emitter junction and eventually to ground. This would amplify Ico (aka Icbo) and create Iceo = (1+beta) * Icbo.

But all these would happen if R2 would not exist. I mean the above circuit is not the same circuit here.

But thermal runaway is independent of this. If you heat up a resistor, the resistance will change a bit (usually in ppm) but this normally doesn't produce a noticeable change in current.

This is why it's important consider the thermal runaway effect and make sure you've considered the changes in beta over temperature. A good idea would to find the max temperature for the design in the datasheet and also consider what would happen if it increased Ic. 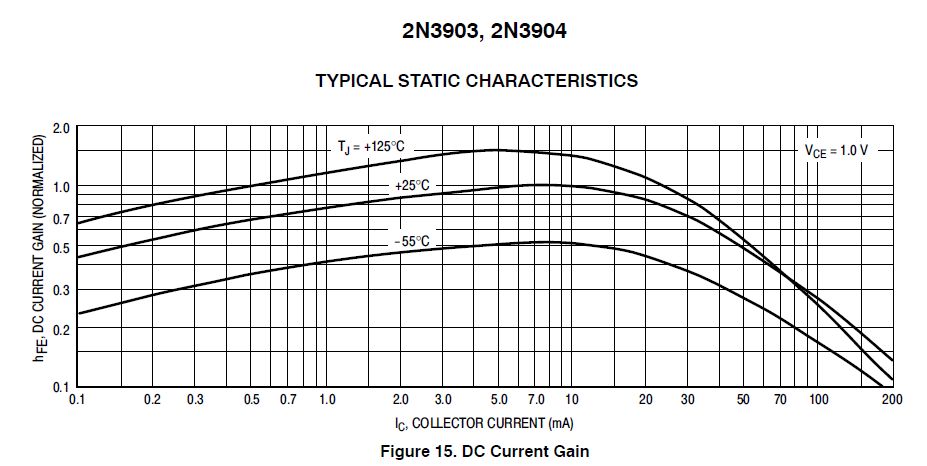 I think the confusion is that for a PNP this would be true, since we have an NPN. If R2 is removed we have more Ib if R1 is the same in both circuits, more Ib means more Ic and more Ie. This would increase the temperature of the part and wouldn't necessarily cause thermal runaway but could cause thermal runaway by starting the cycle. It would depend on the parts in the circuit. 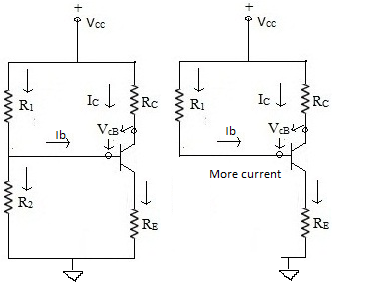 Now if we start from the circuit without R2 adding R2 would decrease the chances for thermal runaway.

No portion of Ie (what you call Iceo) flows through R2 with an NPN. The directions of currents are indicated above.

Those papers like that rarely gives you good circuit explanations.

Not the answer you're looking for? Browse other questions tagged bjt thermal saturation or ask your own question.

2
How ICBO gets amplified to ICEO in BJT when base is open
0
BJT Forward Active
0
Why does the emitter follower clip?
11
Why does the current still flow through the collector eventhough the transistor circuit has no Vcc
0
Does Vbe remain constant when Vb changes but changes when Ve changes for this BJT biasing circuit?
1
Transitor keeps base turned on even at zero volts in dual power supply system
5
Operation of BJT with low values of Vbe (“cutoff” region)
1
Magnitude of \$I_{CBO}\$ in a typical transistor
0
Get some clarification about bias stabilisation with Emitter Degeneration