I have not succeeded to make an e-fuse according to this schematic. Basically its a simple current limiter to 14A , where the mosfet G to S structure breaks the current flow. Can someone check, whats wrong with this schematic? 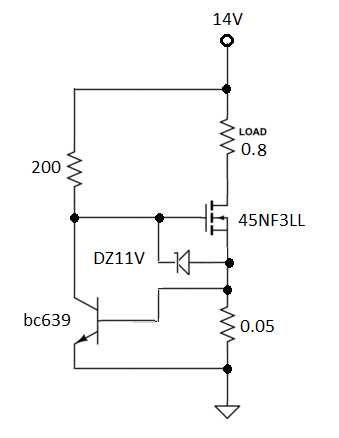 I am sorry, its my missunderstanding. It isnt an e-fuse, its just saturate the current to some limit. Its used to limit drawing motor current from batteries, when the overload appear or during start.

What happened is, it should handle even short on load side, but it doesnt. Whith the new Mosfet, the Vds is limited by zener diode to 11V, but when the overcurrent appear, the Vds gets to 1V or some and stays there, so the Mosfet fail.

No idea if there is some special Mosfet breakdown or what.

It's unusual to see a fuse (or eFuse) in the ground side, but it depends on what exactly your application is and whether it's positive or negative ground. It makes sense here only because the current used by the circuit is not part of the load, so I'm assuming this is what you'd like to achieve.

The circuit you showed does NOT work as an eFuse (cutoff power after a threshold is reached). It simply reaches a point where the FET is driven out of its ON state into a linear region where the voltage across the load will drop to maintain the threshold current.
Something like the circuit shown below may work for you.

To get positive feedback when you reach a threshold requires more than simple current sensing. You need some form of latching into the OFF state (to emulate a fuse).
In the circuit below an SCR is used to trigger ON and OFF actions of the M1 FET switch.
Pressing SW1 turns M1 ON.
Pressing SW2 turns M1 OFF.
Overcurrent turns M1 OFF.

If the current through R1 causes Q1 to conduct, the Anode of the SCR is pulled low and eventually it stops conducting when it reaches its holding current. M1 turns off both due to the SCR turning off and the voltage on the gate dropping due to Q1 operation.

This is a strange aspect of this circuit, but maybe it's what you want to achieve. While there is a reasonably well defined overcurrent trip point, the circuit will not allow currents much higher than the set point (M1 comes out of the ON state into the linear region). So you may see overcurrent trigger at say 17A but current be limited to perhaps 18-20A.
This may be of value to stop things in the external circuit from releasing Blue smoke or acoustic Phht noises. 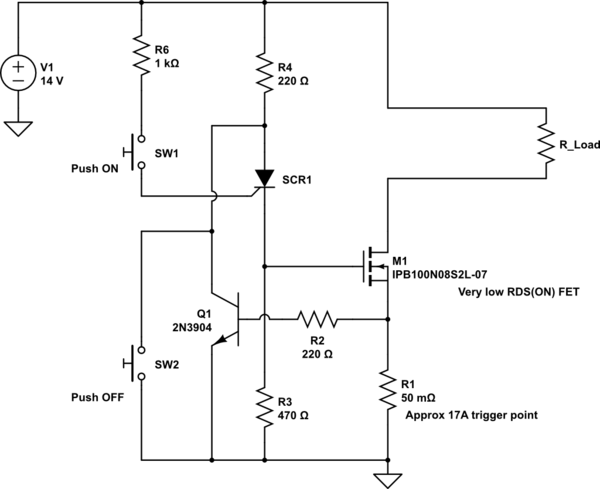 You could of course flip this around and use a P-channel FET to get high side operation. I leave that as an exercise for you.

You are using the wrong mosfet, this is a N Channel mosfet and you need a P Channel for this circuit.

As Jack said on the comments, this will limit the current but not act like a fuse.

"You are using the wrong mosfet, this is a N Channel mosfet and you need a P Channel for this circuit."

I respectfully disagree. By calculation, the BC639 will turn on when the source current exceeds 12 A (or 10 A in the real world). I don't see any reason for the zener diode, and I'd increase the 200 ohm resistor to something in the 1K - 10K range, but the constant current limit part looks ok.