I'm designing a Colpitts oscillator with a single supply rail-to-rail opamp powered with 3.3 V. The positive input of the opamp is set to VDD/2 to offset the negative part of the oscillations so everything stays between 0V and 3.3V.

I have to make a few design considerations and I'm wondering which one is best and why.

What would be better and why, to attach the capacitors to the virtual ground or the real ground? Both circuits work (simulation) but I wonder which is best, I have a small preference to the second circuit because then the virtual ground opamp doesn't need to deliver much current.

I already read following post. Can oscillators be made from a single supply? 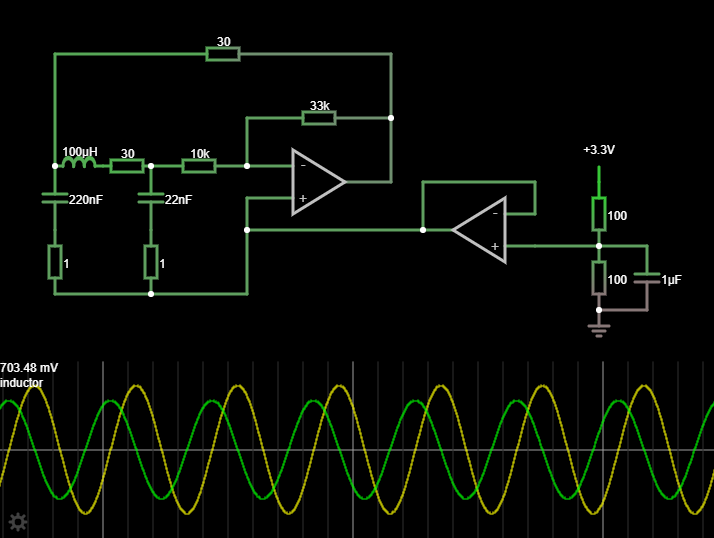 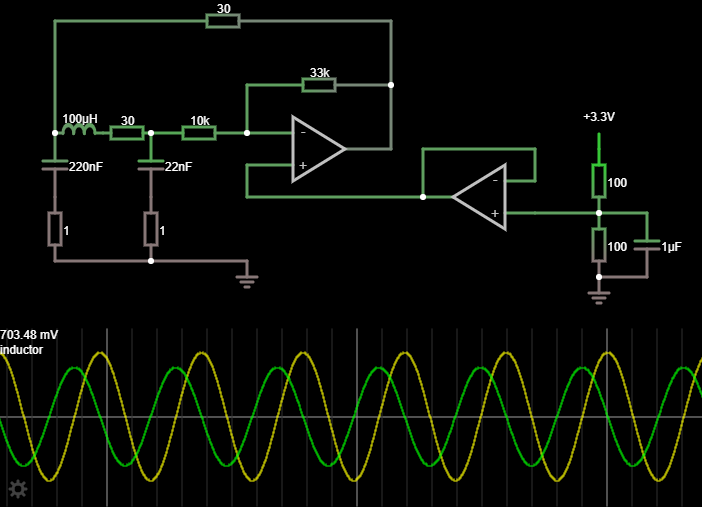 If your virtual ground is stable, it makes no difference. Your two capacitors behave the same, regardless of the DC bias they're subject to.

Since you say it isn't, go for the second circuit. In fact, since practically no current should flow into an opamp input, you can omit the voltage buffering second opamp alltogether, too. And: 100 Ω is far too small a resistance – at the femto- to microamp currents that might flow into an Opamp input, a 10 kΩ - 10 kΩ voltage divider should work just as fine; replace the gigantic 10 µF cap with a smaller one when you increase the resistors, as that will otherwise take "eternity" to charge.

Generally, don't forget this is just a simulation with what I presume are idealized component models – in real world, a 100 µH coil has some DC resistance (simply because it's not made from superconductor), so read that from the coil's datasheet (measure if you're just using an inductor you've got lying around without datasheet) and adjust your series 30 Ω accordingly.

Same goes for your opamp: it has some finite bandwidth, i.e. high changes in phase at high frequencies. I'm too lazy to calculate your Colpitt's frequency, but most opamps should be save at these frequencies; still, it's rather uncommon to build oscillators from opamps, where simple transistors would do (and probably has nicer phase behaviour at higher frequencies).

2
Can oscillators be made from a single supply?