What additional elements do I need in my circuit to compensate for changing a pair of manual 500k ohm pots to a pair of digital 10 ohms?

I'm a beginner implementing an Atari Punk Console on Raspberry Pi following a circuit I found online. That circuit called for two 500k ohm variable resistors that are used in combination to vary the sound coming from the device. I want that effect-making under computer control so I swapped in a 42010 digital pot (which has two pots built in) but which only has 10k ohm resistance per resistor. The circuit works but the volume is less substantial than the original and the range of impact of effective digital values is small, with the effect only occurring on the low end from 1 to 100 on one, and 1 to 60 on the other. I guess that is to be expected insofar as it's at the higher resistances that the interesting sounds might be.

There is also a NE556N timer involved in the circuit. I've adapted it to the Raspberry Pi and I'm using 3.3 volts. Here's the circuit I started from: 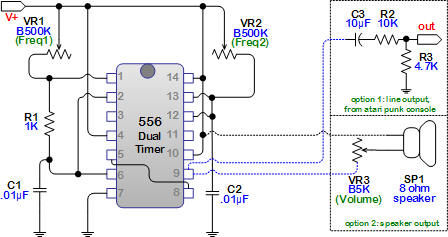 Presumably you've worked out how this circuit works? The left side is set up as an astable, and as such the DISCH (pin 1) pulls the timing cap back down to the lower threshold, so you need a series resistor with VR1 to limit the current going through it with either the mechanical VR or the MCP chip (bit of an oversight on the original version) The right side is set up as a monostable, so again the DISCH pin (13) pulls the cap down at the end of the pulse, so a series resistor is needed for VR2.

Making the circuit work with the 10k range of the chip can be improved by making the timing caps proportionally greater to maintain the same frequency range. There are formulas and even online calculators available for this in many web sites (example). The overall effect is that VR1 controls the frequency, and VR2 controls the width of the pulse at the output, which will change the harmonics present, and hence the tone.

It's a fun circuit to try out, but using a Pi to control the MCP chips to control this circuit seems to be a long way around to generate what is effectively a variable frequency pulse width modulated (PWM) signal, when the Pi has a PWM generator built in - though the hardware PWM doesn't divide down that well to audio frequencies, there are methods of generating PWM in software for lower frequencies.

It would most likely be fine to use a 10k digital pot in replacement for the 500k pots. There are a few gotchas when working with digital pots, the first one is they can't take a lot of current (only 1mA for the wiper current of this part) through them or they burn out. In this case you should be fine because the input of the 556 is high impedance and takes very little current, the cap is also high impedance at DC and also takes little current.

You may want to use a 100k part instead of a 10k part, to get the same resistance range, otherwise you might want to increase the cap by a factor of 10 to get the same RC time constant range.

The other problem is the resolution, with only 256 taps, this limits the frequencies that can be generated. A regular pot is continuous and can generate as many frequencies as you want with the RC filter of the 556 timer. A digital pot will restrict this to whatever the pot can handle.

Not the answer you're looking for? Browse other questions tagged raspberry-pi 555 potentiometer music or ask your own question.

0
Replace potentiometer in Dart Controls 90vdc motor controller with raspberry pi
1
Replace a 500Kohm potentiometer with a digital one
0
Replace analog pot with digital - volume control
2
PWM dimmer for off-the-shelf 12v LED bulbs
0
Steps to replace a 10k ohm pot with a 10 ohm pot
2
What's the effect of shorting the wiper terminal with one of the ends of a trim pot?
1
10K Potentiometer with Arduino Uno and 5v works but same pot with ESP32 and 3.3v floating values
6
Why can't I trigger my relay?
2
I2C bus fails after a few sensor reads