What would be the consequence of the inductor saturating?

The following is a section from a book where it is talking about decoupling by LRC at supply terminals. I highlighted the sentence where I didnt understand: 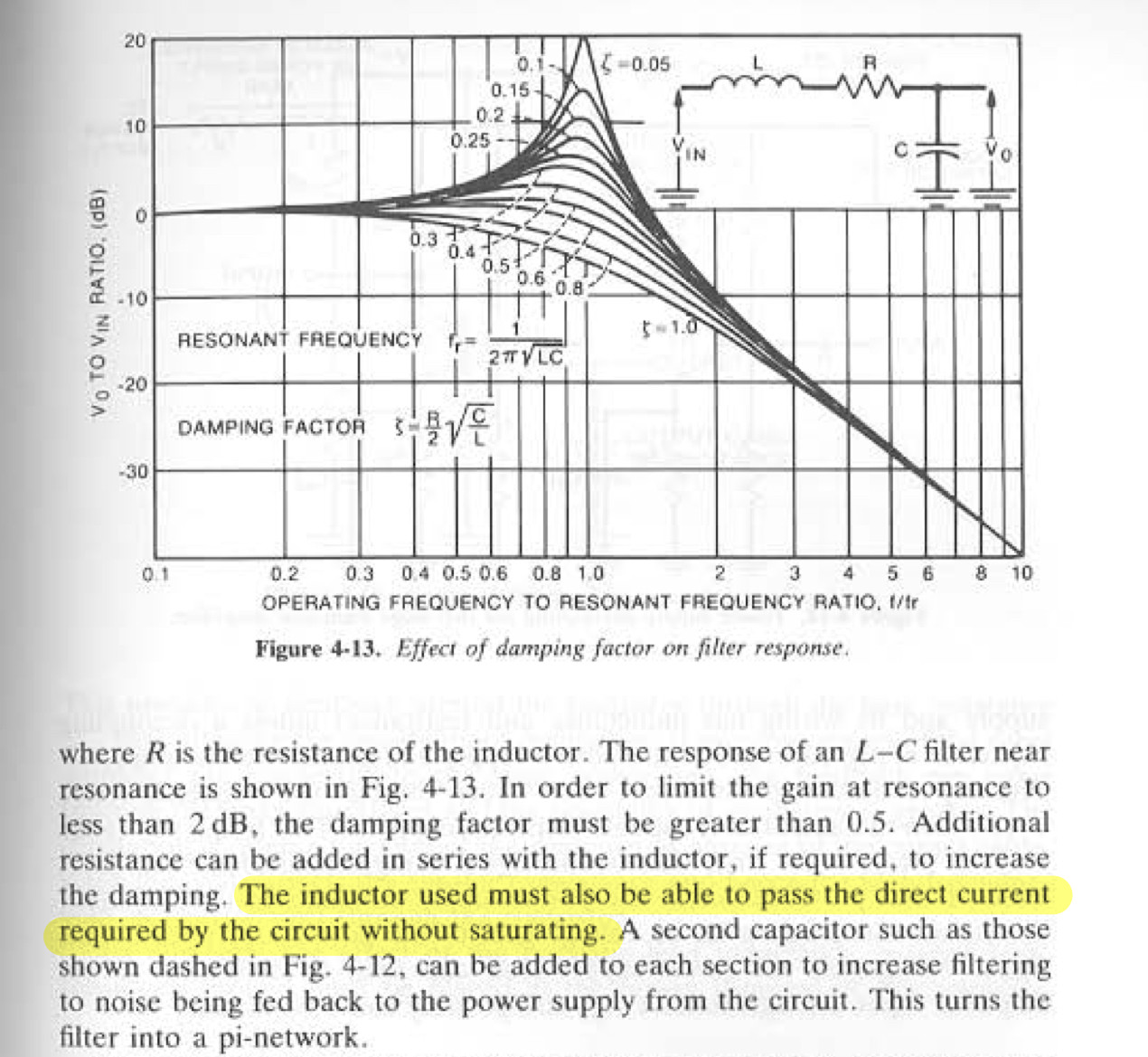 But what is this highlight talking about? Is that assuming that the inductor has an iron core? And most importantly what would happen if the inductor saturates in that context?

One thing that happens as the core begins to saturate is that the inductance value drops, precipitously at saturation. This will change the filters AC characteristics. In a filter application, obviously the AC signals you are trying to block becomes less blocked. Many specifications for inductors intended for filter applications will provide inductance vs DC current. This is a function of the core material. For all practical purposes air can't be saturated, but as far as I know all ferro-magnetic materials can be.

You are showing a picture with a frequency response, but this sort of problem cannot be analyzed like this, anymore. An .AC analysis linearizes the circuit, but a saturating inductor is anything but. So, the only way to see it is to simulate it in time-domain. Or on the breadboard, be sure to bring protective gear...

Here's an attempt in LTspice using the nonlinear Chan core, with some bogus values (for exemplification, only). The first picture shows what an .AC analysis would look like: 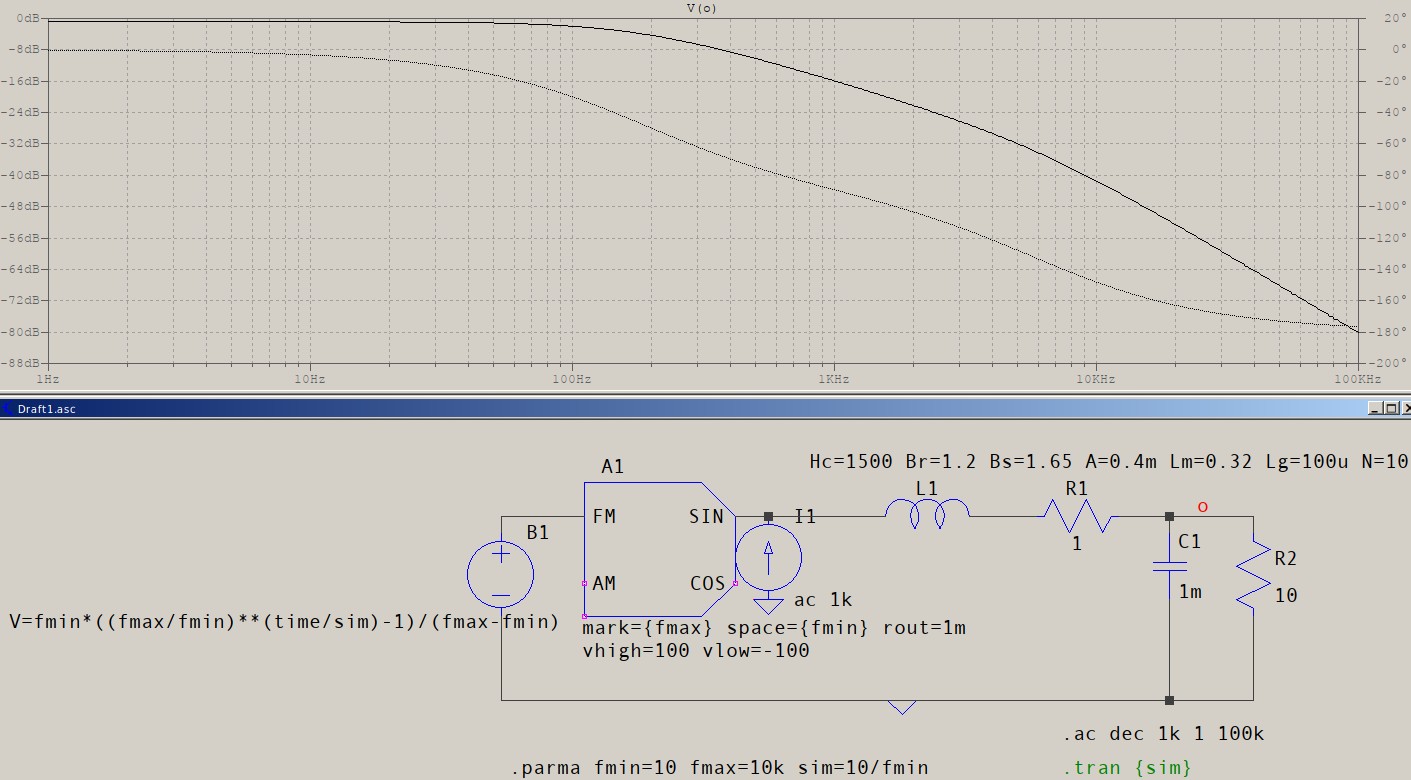 Which shows a nice, smooth response, two docile poles. If you switch over to a .TRAN analysis, and make it a frequency sweep (from fmin to fmax) with a high enough amplitude (see vhigh and vlow):

Which, again, looks innocent enough, but when you check out the current through the inductor, here's what you get: 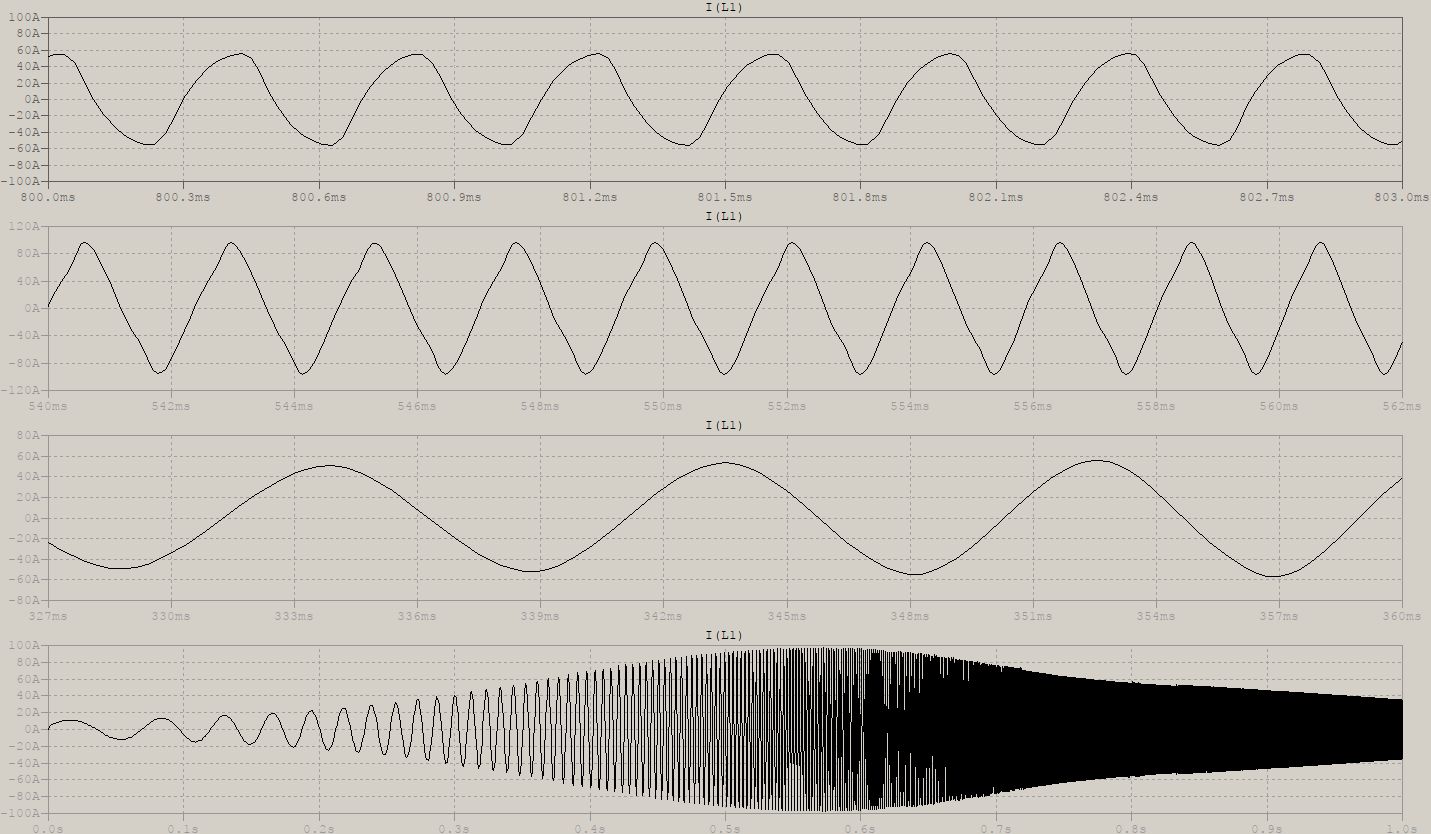 Below is the whole simulation, and the above three show details in three sections around the beginning, middle, and end. You can clearly see that the beginning (3rd row) and the end (1st row) are low in distortions, but the middle is not only distorted, but also high valued. As @winny and @jonk say, in simplistic terms, the inductance drops, hence the current rises, but relative to the waveform shape. And the transition is related to the hysteresis of the core. You can think of it in terms of a tanh() curve: the slope around zero is smooth and quasi-linear, but when you get to saturation, the value along the x-axis (magnetic field strength) rises very abruptly with the slightest y-axis (magnetic flux density).

Not the answer you're looking for? Browse other questions tagged filter inductor passive-networks resonance flux or ask your own question.

19
How does flux work, chemically, and what are the products?
2
coupled inductor in series
2
Polarity of the induced voltage on inductor for an applied magnetic flux according to the Lenz's Law
1
Is inductor saturation current frequency dependent?
0
Confusion with flux and Lenz's law in an LC tank circuit
12
Why do we want gap in the core material while designing inductor?
2
Saturating magnetic field in an inductor without heating
5
How does the magnetic field of an inductor affect the operation of a DC circuit?
0
DC Inductor Design Using Powder Cores