I am taking Signals And Systems class where I have to calculate the admittance parameter of a given circuit. A given circuit for example: 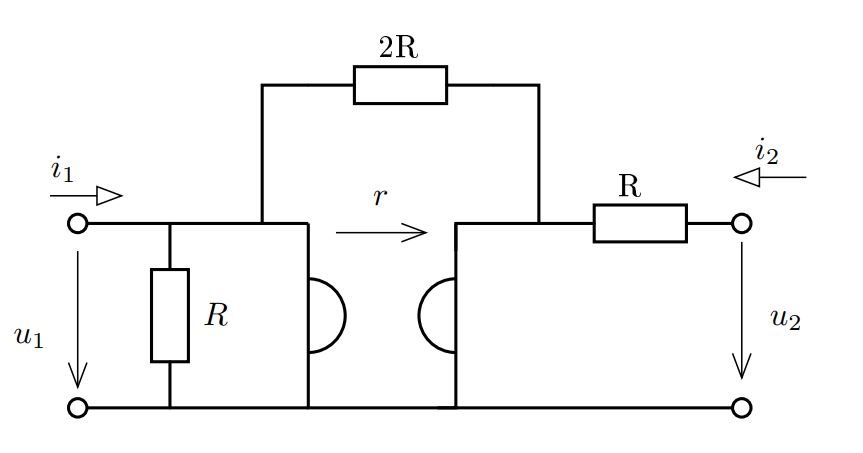 This is tedious and calculating the parameters takes so long. I took last year a graph theory class where they pointed out graphs are used for solving electric circuit.

which kept me thinking maybe there is an algorithmic way to produce the right equations so then i can calculate all the required parameters.

Do you know if there is any algorithm or better(in other words logical)approach for a problem like this one?

A graph-based approach is going to result in the same equations, just expressed in a different form.

I would argue this itself is pretty algorithmic, since for each Y parameter, you end up calculating the input admittance of a one-port. Because you know how each of the components in the network behave, you will end up having to solve some node or mesh equations to obtain the current behavior from voltage.

Now, let's consider a graph-based approach. You either end up solving a system of \$ n \$ KCL differential equations for the \$ n \$ nodes in consideration or \$ l \$ KVL differential equations for the \$ l \$ meshes in your graph. In contrast with typical analysis however, one difference in your case is that you will have to keep track of some extra branch currents because \$ i_1 \$ and \$ i_2 \$ enter and exit the network.

Your next task would be to manipulate the system of equations you obtain to look like the system above, where all currents are expressed as transformations of voltages. Ultimately, you'll get the same solution.

One note: The gyrator sitting in the middle of this two port makes analysis a little tricky. If your circuit is composed of just resistors, capacitors, and inductors, there are additional "shortcuts" for coming up with the matrix equations describing your circuit (such as modified nodal analysis). These can also be automated to create circuit analysis programs.

Not the answer you're looking for? Browse other questions tagged circuit-analysis signal-theory graph resistive gyrator or ask your own question.

2
How to find Thevenin voltage of two-port network from admittance matrix
0
Finding CutSet Matrix from a Circuit
0
Algorithm for getting currents and voltages from resistances in circuit as graph
3
Analysis of unbalanced bridge circuit
0
Implement a voltage feedback method to reduce the crosstalkin resistive matrix
4
How to generate a complex sinusoidal signal on a function generator?
0
Extract the nodal admittance matrix of a given circuit in LTspice
2
Which matrix index should be used when Y (admittance) is shown to compose a circuit segment mapped to an ABCD matrix? Y21? Other?