Is it possible to build a simple circuit where one switch controls all bulbs but small switches control individual bulbs?

Putting aside the embarrassment of asking for a 'simple' solution, I will state in advance that I know I could do this with push-to-make switches and MOSFETs. What I am stuck on is whether I am missing an obvious wiring solution that would have the same effect without parts I don't have currently.

So here's the situation:

I would like S1 to retain the same amount of control that it currently has. So if S1 is on, B1+B2+B3 are on (regardless of the state of S2 and S3), and if S1 is off AND S2 or S3 are on, ONLY B2 or B3 (respectively) are on (in an ideal world, if S2 were already on, S1 were switched on then off, all bulbs would turn off, however I believe this is a logical impossibility)?

I have latching switches, diodes, and wires galore, but no transistors to make this. Is it possible? 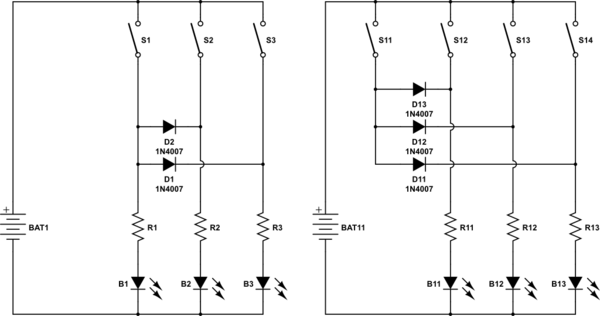 The left schematic is as I interpreted from your description.

The right schematic is if you'd want to control all LEDs separately.

Is usage of diodes acceptable? Is so, then following solution should work (I hope I understood your question correctly):

You can switch all leds with SW1, even if SW2 and SW3 are off, but when SW1 is off then you can turn on LED2 and LED3 separately with SW2 and SW3...

Not the answer you're looking for? Browse other questions tagged switches diodes or ask your own question.