Low-impedance tap in this oscillator circuit 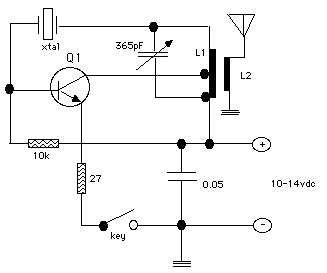 Here is the schematic of Michigan Mighty Mite, a popular transmitter circuit design. It seems to be quite close to a regular feedback oscillator, with a few peculiarities.

I attempted to draw a simplified schematic of the LC circuit and the amplifier in this circuit, omitting everything else, including the crystal: 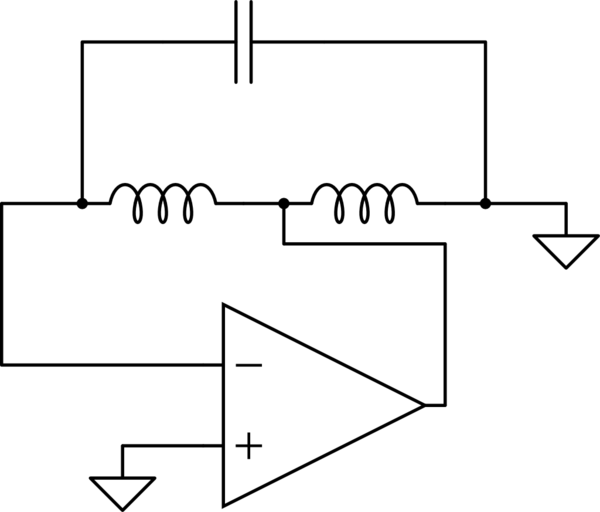 The battery appears as a short for an AC signal, so one side of the LC is connected to the ground. I omitted details of the amplifier and replaced it with a generic amplifier whose output is being fed back to the LC circuit, and the two inductors represent the tapped inductor. Is this anything close to representing the circuit?

So my question is: How does this idea of having a lower impedance tap in the LC part of this circuit increase the current oscillating in the circuit?

It is the nature of oscillators that the oscillation will tend to grow in strength until it is limited by something. In this case that something is the voltage supply working against a fully turned-on transistor in series with the emitter resistor. To get the maximum power transfer, the impedance seen by the transistor collector needs to be in the neighborhood of 27 ohms (give or take a factor of two).

Thus the low-impedance tap. Because the crystal is operating into the transistor's stray capacitance, it's impedance as seen by the LC tank is going to be quite high.

The transistor collector is how power gets injected into that resonance circuit. The "tap" is not so sensitive to changes in transistor capacitances (C_ob, C_base_collector), because of the low impedance at the tap. Notice the 0.05uF connected across the battery; that cap is crucial to establish "low impedance".

Thus the resonance set by the 365 PF variable capacitor is minimally changed by changes in the transistor parameters.

The voltage on the LC is INPHASE with the transistor.

We still need an inversion. The crystal provides that. 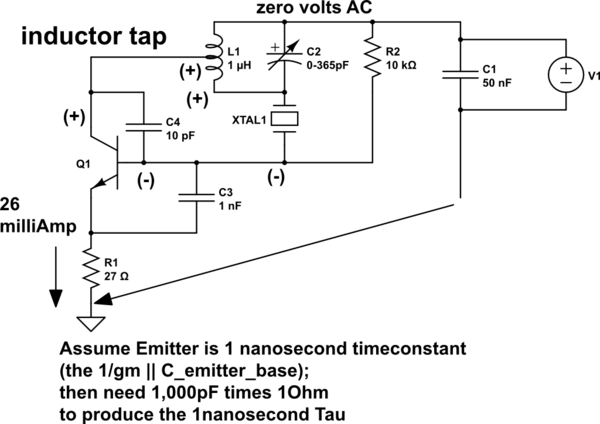 Not the answer you're looking for? Browse other questions tagged oscillator impedance or ask your own question.

0
Decrease Impedance at Higher Frequencies
3
Strange behavior from a circuit, please explain
0
Correct calculation of conductance/susceptane and from there to admittance, impedance, resistance and reactance.
3
Why does this regenerative receiver not just turn into an oscillator?
1
Is this measurement of a cricuit's output impedance valid?
1
Closed loop output impedance
2
How does Wien bridge oscillator work
0
Understanding the Michigan Mighty Mite
2
How does this impedance matching circuit work? How to simulate it correctly in SPICE?
0
Topology for ideal cutband response (-20dB per decade per order) for passive, low pass, constant output impedance filter