What is a reasonable ohmage measurement for a microphone on a PC headset?

I've taken apart my PC audio headset, because the microphone stopped working. This random website seems to imply that most microphones for PC headsets are "low impedance" between 150 and 300 ohms. After taking out the pickup unit, I find it is measuring at 850 ohms. I realize this is a simple resistance measurement, but I seem to recall that worked for debugging whether a DC motor was working. I was hoping it might also be an indicator of microphone health.

What is a reasonable ohmage measurement for a microphone on a PC headset? At what ohmage would the microphone be considered broken?

Update:
Hmmm I'm seeing this page per the gracious Google, so maybe that answers my question. Perhaps most tiny pickups are actually classified as "Medium Impedance".

Although the method you link to may work in some cases for some microphones, it's definitely not a foolproof method of telling whether a microphone is faulty or not.

For example, if we take the claim from the article:

The microphone shown is an electret, which is a type of condenser microphone. The actual microphone element for a typical working condenser has a DC resistance of >>10MΩ (probably in the GΩ range - there is a reason why you measured much less than this which we will get to in a moment) It's AC impedance is much lower as it's basically a capacitor, and a capacitors impedance lowers with rising frequency, being infinite at DC (for an ideal cap, read very high for the real world) So obviously measuring a high resistance with a condenser element is not going to tell you whether the mic is faulty or not. It would not work with a crystal microphone either, and possible other more exotic types not metioned here. With mic elements like these, a low impedance would actually signal a fault.
However, if the microphone is a dynamic (coil) or ribbon element, this approach would work, as there is a DC path through the element.

So why did you measure a low impedance?

This brings me on to the other thing to be aware of, that you have to be sure what it is you are measuring. Complete microphones are rarely just the element, they have circuitry that may completely mask any characteristics of the element. Also, the impedance will be different when measured at DC or AC - since a microphone is an AC device, the AC measurement is probably more important than the DC to test more thoroughly.

Now when you measure the impedance at the left two points (the pins of the capsule) you get an impedance of around 1kΩ, which is not the mic elements impedance, it is the JFET drain to source impedance (marked 'D' and 'S')
This JFET is a small transistor, used as an impedance converter (very high as mentioned above, to low) which means it amplifies the tiny current from the element itself (it also amplifies the voltage a bit). This has various benefits.
The impedance is not static (can vary from a few Ω to many MΩ depending on gate source bias, although used like this it will only vary over a smallish range) and also depends on which way round you probe it - I just checked with a capsule here and got 2kΩ one way and 1kΩ the other. However with no sound the transistor should be biased partially on so you read it as a lowish resistance. The preferred way would be red probe to the + lead.

Here is a picture of an open electret capsule with the electret diaphragm (shiny flat round thing in middle): 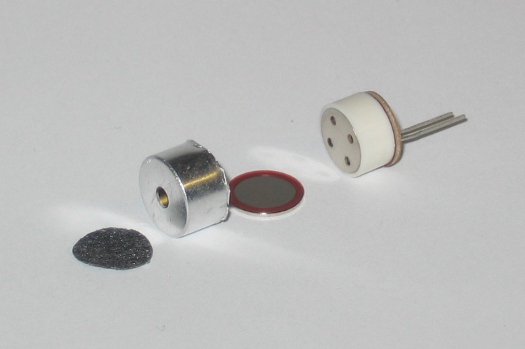 And here with the diaphragm and backplate (flat round thing with holes) removed to show the JFET (black thing with 3 leads): 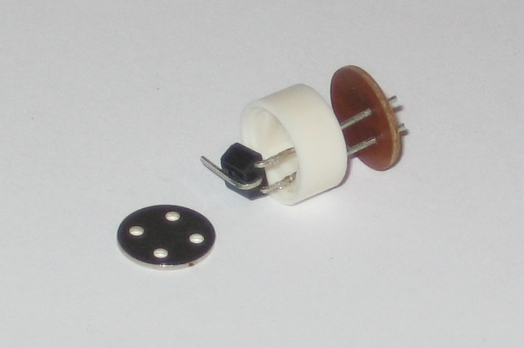 Having said this, if you measure directly at the element and are certain no other components are in parallel and affected measurements then a very high or very low measurement will likely mean a fault.
If this capsule was part of a microphone and you measured at the right hand two points on the above diagram, then the DC measurement would be very high, but the AC low. So hopefully you can see how important it is to know what/where you are measuring, and testing microphone operation is not always as simple as measuring DC resistance.

1
Broken headset, repaired, but microphone doesn't work on computer, does work on phone
5
Wired headset circuit
1
Reversing headset speaker to microphone
0
Headset with microphone effect on smartphone battery life
3
Join the microphone and audio lines from a headset for recording