ADS Simulation: Why doesn't the diode rectify the signal?

As titled, the diode in my half-wave rectifier did not rectify the AC signal. Vd1 is still AC signal. Therefore Vout ~ 0V. Why could that happen? The diode's parameters are SPICE parameters.

The strange thing is, with exactly that diode's model, for a shunt-diode rectifier, it worked!!! The results are attached. Could anyone give me a hint to solve this problem? Thank you very much. 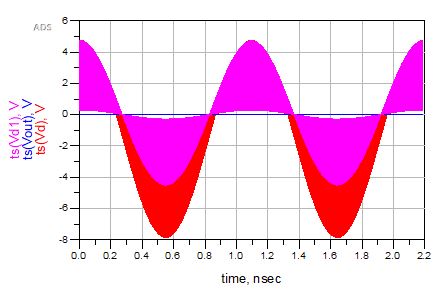 All of you were right about the DC feed. Thank you very much for pointing out the reason. But there is still one question. Why did not the diode block the negative half-cycle of Vd as it should do in the theory? As observed in my following results, in negative half-cycle Vout amplitude is smaller than that of Vd, but it's not 0. I also removed the DC block, and Vout = Vd. How can it be?

the diode in my half-wave rectifier did not rectify the AC signal.

I don't see this in your results.

It looks like some of the time Vd and Vd1 are equal, and other times, Vd1 is about 3 V above Vd, which is exactly what you expect for half-wave rectification.

If you zoom in the time scale on the plot to see the individual cycles, this might be more clear.

Therefore Vout ~ 0V. Why could that happen?

I think this is because of the DC Feed. This device models an effectively infinite valued (maybe it is actually modeled as 1 GH or something) inductor. In a finite time, its current won't change. This component is used to provide a short in an operating point analysis, but an open in every other kind of simulation.

Run the transient simulation for a couple years of simulation time and you might see a non-zero output at Vout.

Or change the DC feed to an inductor with a realistic value (and calculate how long you'll have to run the simulation to see a response).

Is it possible your "DC Feed" is set to block AC and DC?

That would fit in with the DC feed blocking everything. With no load, you would see the original signal coming through the diode. No load means no current, which means both sides of the diode have the same voltage.

This is, I think, a trick of the simulator. The voltmeters (or whatever is measuring Vd1) are ideal, and draw no current. With a real voltmeter, a tiny bit of current would flow and you would see rectification.

Either remove the DC feed, or add a resistor from Vd1 to ground.

Either of those should make your diode work properly.

After your update, I am out of ideas.

The datasheet for the diode you are using says it is optimized for 915MHz to 5.8GHz operation, but that shouldn't stop it from working at lower frequencies.

I think the output of diode (or a diode circuit) doesn't necessarily output the so-called "half-wave". It depends on the load resistance and capacitance.

For a rectifier circuit (like your case), if you remove the load resistance or using a quite large load resistance, you could probably see the "half-wave" rectification.