I have noticed that a lot of CRTs have a coloured coating inside of them that would appear to have practical purpose other than maybe protecting the aquadag. Paints and plastics tend to be avoided in vacuum scenarios, so I can't imagine that the green coating is paint. Would anyone happen to know what the green layer is and why it's there?

To be clear, I know from breaking one of these open that it's a flat layer of green. In this image, the CRT PDA (The black lines) is helical, but I've also seen this green in banded PDAs.

It looks like rings with graphite between an algae green silicate binder to dissipate static build up on the tube to prevent glass partial discharge. If discharge occurs between ring of dielectric, the capacitance is in series and only a partial discharge would occur if it failed from contamination in the vacuum. A conductor then bleeds the mA current off somewhere.

Aquadag™ consists of a dispersion of colloidal graphite in distilled water.

The aquadag coating has two functions: it maintains a uniform electric field inside the tube near the screen, so the electron beam remains collimated and is not distorted by external fields, and it collects the electrons after they have hit the screen, serving as the return path for the cathode current

Below is a typical small electrostatic-deflection CRT - looks like my old 3JP1 (diagram from this book. 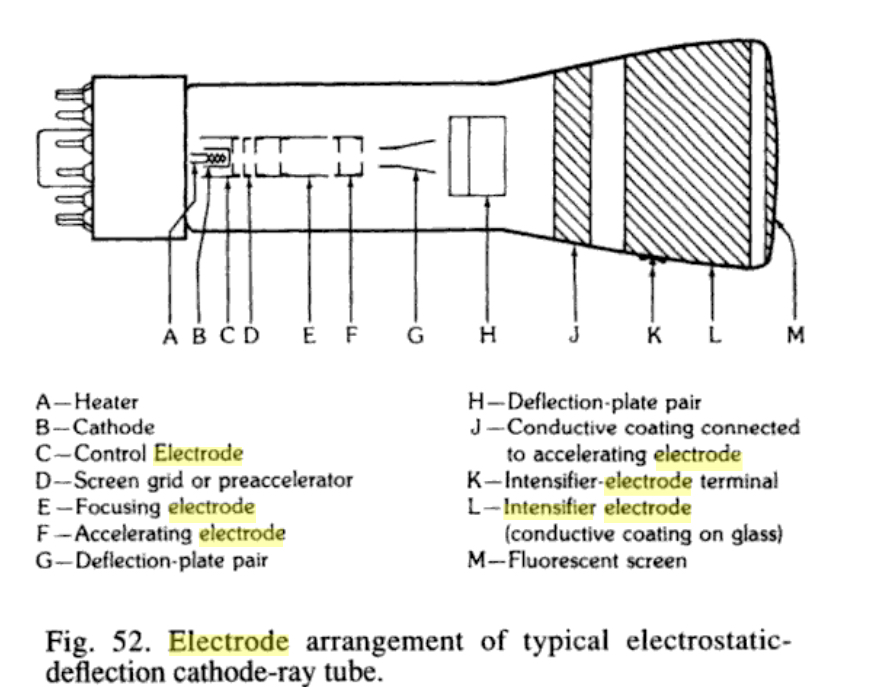 Typically the accelerating electrode runs at around double the voltage of the intensifier electrode (eg 4kV and 2kV).

My speculation is that the concentric dark rings are relatively conductive and the green coating is much more resistive so that a voltage divider is formed along the axis that the electrons are accelerated. The concentric conductive rings ensure that the voltage distribution is uniform about the central axis so as not to improperly deflect the beam.

Most likely a lead containing compound to reduce radiation exposure to users. If your referring to the green, I believe that is a wire coil.

Not the answer you're looking for? Browse other questions tagged oscilloscope vacuum-tube insulation crt or ask your own question.

1
CRT monitor SMART protection capability
5
What is the red/orange coating underneath a CRT anode suction cup, and is it important?
20
Espionage by CRT mirroring
1
What the heck is a “radiator plate” in a CRT based oscilloscope?
7
Fixing old CRT oscilloscopes… what to look for first?
6
What purpose are the transistors serving in this CRT oscilloscope circuit?