I'm currently working on an analysis of a standard Cascode circuit, in particular why the frequency response is so good as it reduces the miller effect. 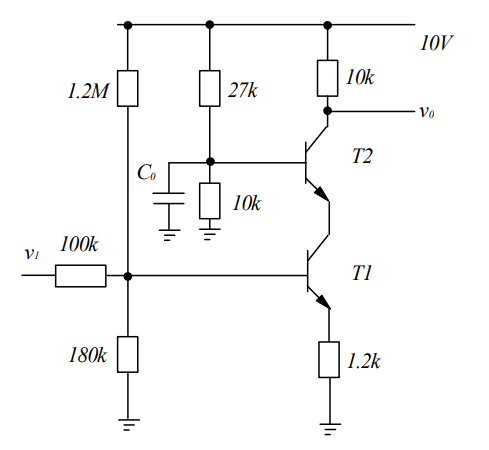 I have had a very vague explanation given to me that the node between T1 and T2 acts as a virtual ground in small signals as the voltage at this point 'stays almost fixed' so that there is no gain across the C_cb. I have spent ages trying to see why from the small signal circuit, but we have only been taught h-parameters, whereas a lot of online assistance uses hybrid-pi(?) which has just confused me even more. Similarly nowhere seems to deal with the capacitance between the Collector and emitter. These are all the capcitance that I am aware of that I need to consider: 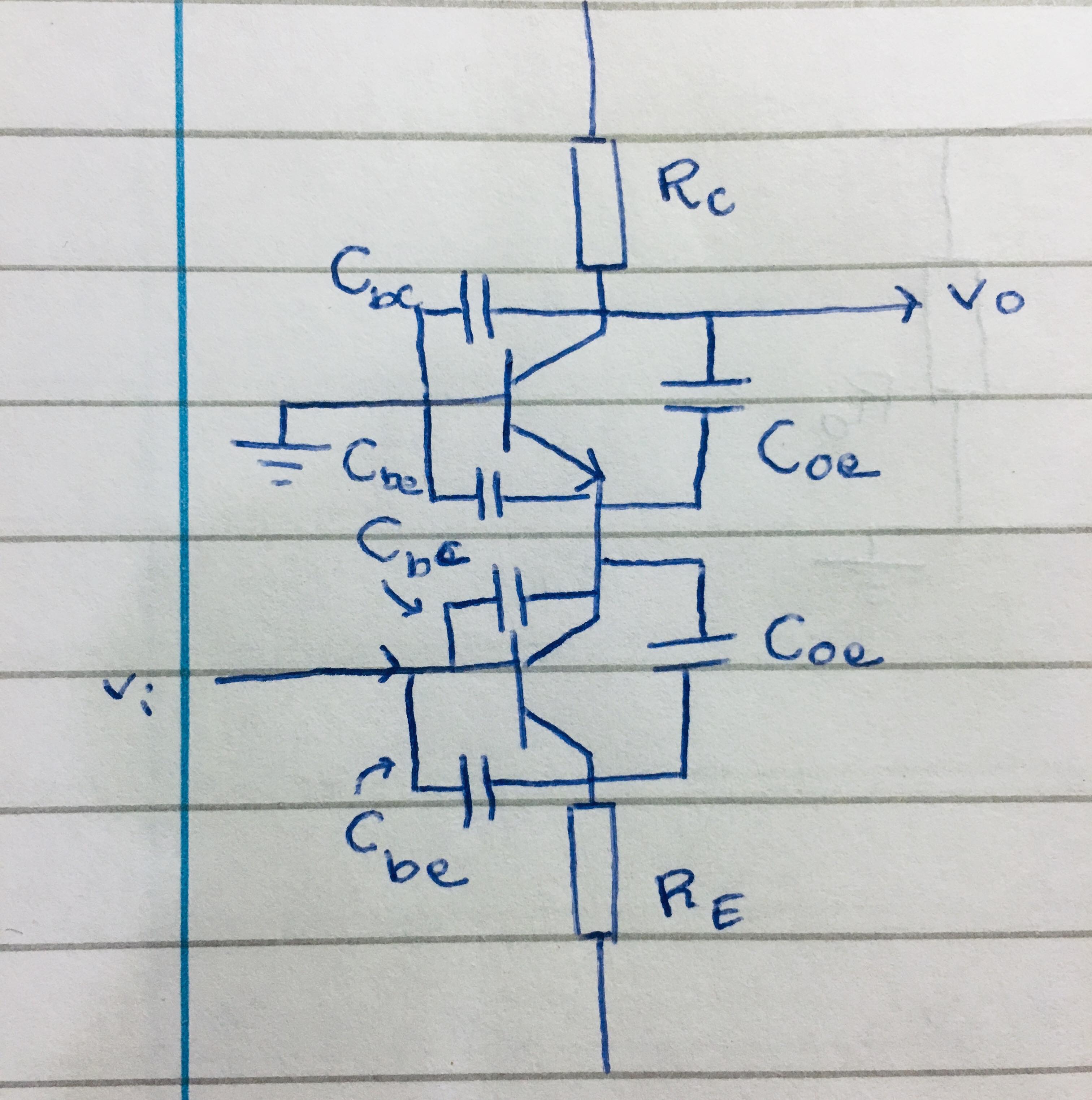 So instead I was inspired by a different approach I found online to consider the Common Emitter stage and the Common Base stage separately, which gets me close to the right answer but I can't justify why there is no Miller effect between the two stages. i.e. consider the circuit as follows:

First looking at the Common Emitter stage the gain is given by:

Which is exactly what was expected in the answer for the input.

Which provides an overall gain of 8, again great exactly what we are looking for. Similarly the output capacitance of the common base stage with everything referred to ground is (note \$C_{oe}\$ is the capacitance between the collector and emitter - that seems to be notation that is different everywhere I have read too?):

since the base-collector capacitance is already referred to ground in the smaller signal model.

HOWEVER, the problem is looking at the stage BETWEEN the common emitter and common base stages where the intervening capacitance is (by looking at the output cap of the CE amp and input cap or CB amp):

I believe \$C_{mid}\$ exists from breaking down the hand drawn circuit image at the start. First of all we have the following diagrams considering all the capacitances including those between input and output (any capcitances between common terminals have been referred to ground already): (apologies for two seperate images but they are meant to be in series with one another) 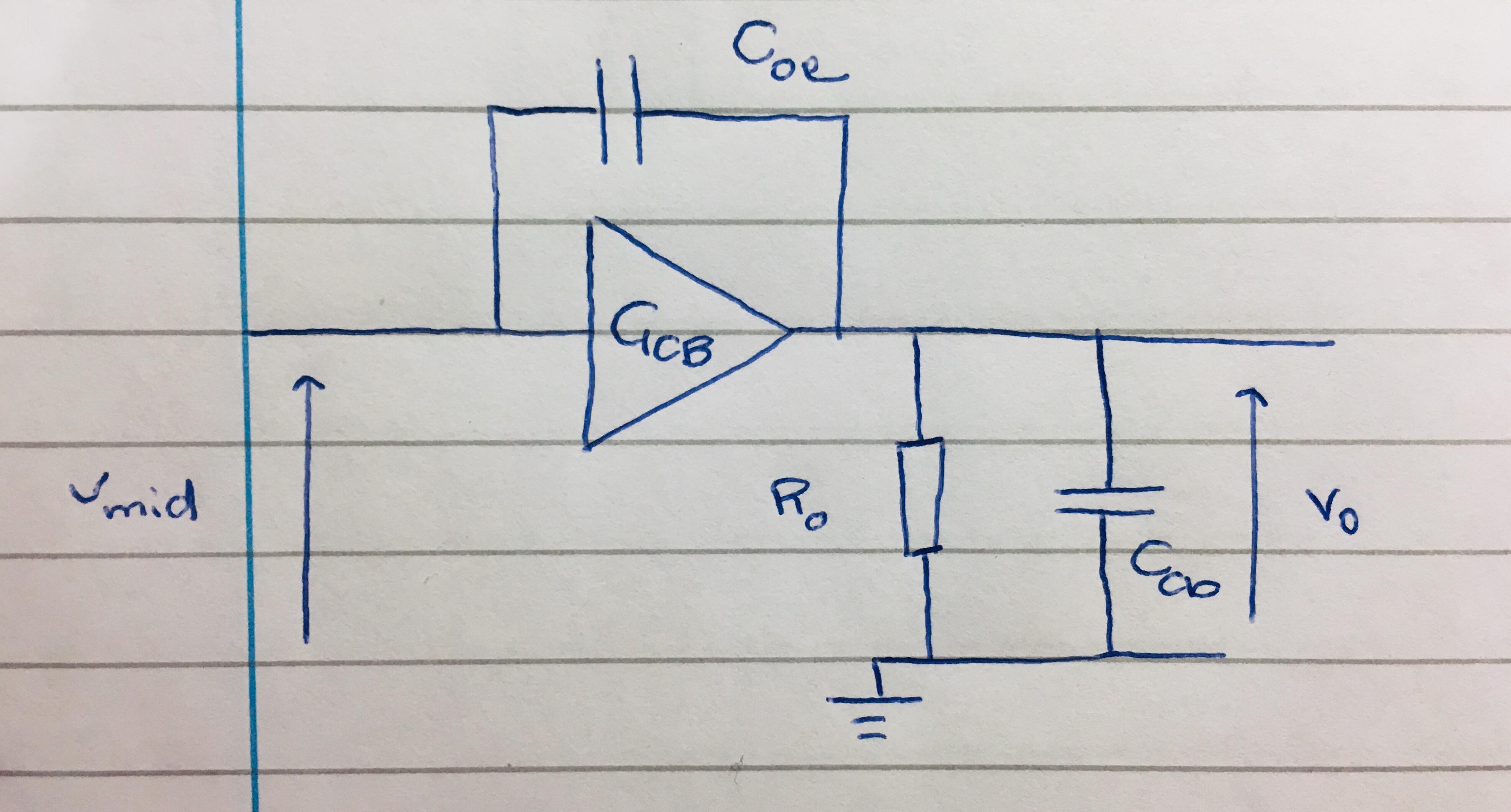 Each of the capacitances across the amplifier terminals can be referred to ground using the Miller theorem like so:

The high frequency cut offs are going to also depend on the thevenin resistances associated with each capacitance which for in, mid and hi, will just be the R_in, r_e and R_out respectively, so while the capacitance in the middle is going to be much bigger than the other two, is has considerably smaller resistance associated so will not be the limiting factor.

First of all - is that the correct justification to make?

If you take typical values of the different capacitances as C_be = 22pF and the others being ~ 2pF then C_mid = -324pF.

With the cutoff frequency calculated using:

Does it still make sense to just take the absolute value of the capacitance here?

EDIT: The specific performance of the circuit above is largely secondary as it was the circuit we were analysing in the question, I just included it for typical values to help explain my reasoning.

To be able to see why there is no Miller effect in the Cascode circuit. First, you must understand that the Miller effect occurs only in inverting amplifiers and when the capacitor is connected between the input and the inverting output.

How does a Miller cap physically create a pole in circuits?

Now let us back to your amplifier circuit. From the AC signal perspective, the situation will look like this: 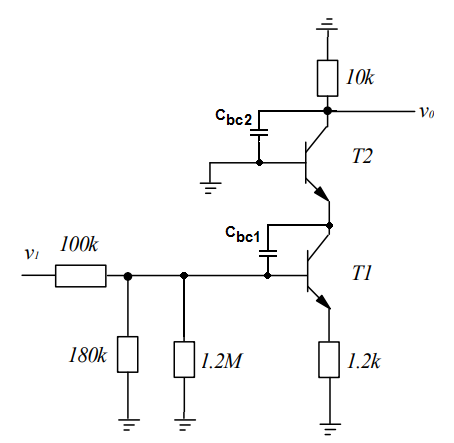 The real problem is the Miller Capacitance, Cm has great affect when your source resistance is too high. Here Zs=100k when it should be more like the base impedance of T2.

Then how much of that current goes into base ( ratio=k) gets amplified reduces the gain further from negative feedback with gain, depends on impedance ratios of source and input to base .

k is some impedance ratio that splits feedback current into the bias R's and Base impedance.

Effectively you can get up to hFE more bandwidth but voltage gain is still only Av=Rc'/Re' , the equivalent impedances on each node collector and emitter respectively. 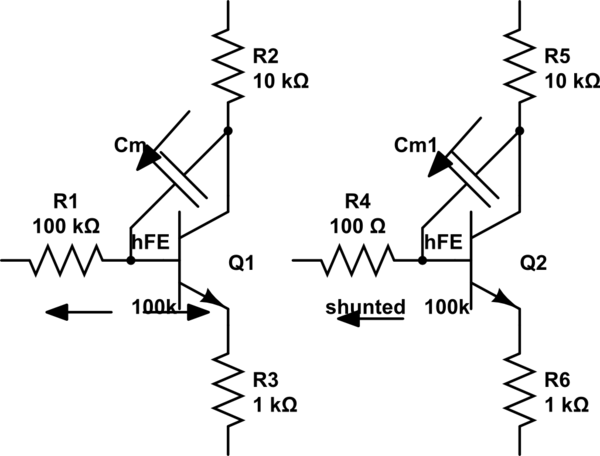 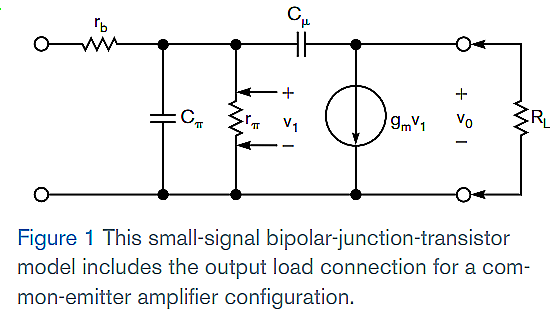 There is also some capacitance documented by Miller in his 1920 article on the output of a tube or Collector emitter, but it has a much smaller effect than the feedback capacitance which sees a higher impedance and current gain.. Meanwhile the common base which has a much lower input load impedance on T1 collector and it is unity gain. 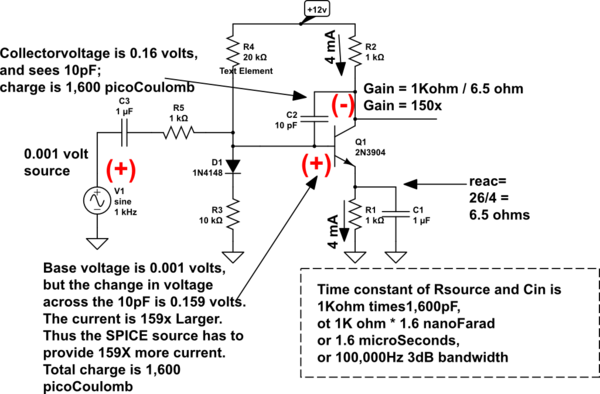 With the Miller Effect (aka Miller Multiplication), the input capacitance is 1,600pF and the input bandwidth is 100,000Hz with a 1Kohm Rsource.

Is this circuit were converted to Cascode, the input capacity would be about 20pF, and the input timeconstant is 20 nanosecond, or about 6MHz.

Not the answer you're looking for? Browse other questions tagged amplifier bjt cutoff-frequency cascode or ask your own question.

2
How does JFET cascode amplifier reduce input capacitance?
3
How does a Miller cap physically create a pole in circuits?
1
Miller's Theorem - Input Capacitance

4
Av for small signal analysis with BJT for unbypassed emitter and ro in place
5
AoE3: Grounded Emitter Amplifier Distortion
1
Effect of emitter capacitor in common-emitter amplifier
0
BJT Differential Amplifier Common Mode & Differential Mode Gain
5
How to derive the precise gain of an NPN common emitter amplifier without emitter degeneration?
3
Negative feedback from block diagram to circuit components
0
Why does a Common Base amplifier gives non inverting output?
0
Why is the voltage gain in the simulator so different from the expected gain?
7
Transistor amplifier design