How to find the transfer function of this first order active filter?

Going through Design with Operational Amplifiers and Analog Integrated Cricuits, in Chapter 3, problem 3.4 I am asked:

The circuit of Fig. P3.4 is a noninverting differentiator. 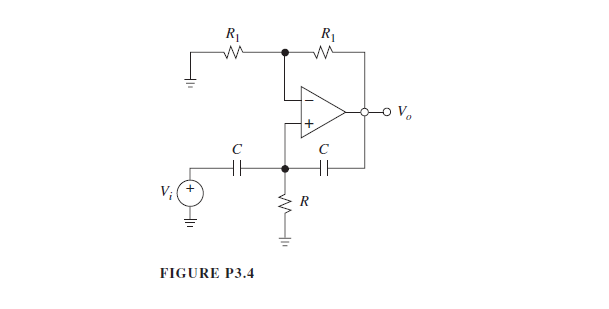 I know that for a differentiator such as this, H(s) = -RCs

and for example, a resistor and capacitor in parallel, the impedance Z1 is equal to R/RCs +1.

The closest example I could find was that of a Deboo integrator, whose transfer function is H(s) = 1/RCs.

I am still struggling to understand how to extract the transfer function for Figure3.4. Any help would be appreciated.

You need nothing than the equations of feedback theory for opamps.

The general form for the closed-loop gain is

which simplifies for infinite openloop gain Aol to

Here, the function Hf is the forward damping and Hr is the feedback function. Both are defined as follows:

Hf=Vd/Vin for Vout=0 (grounded) with Vd=diff. voltage at the opamp input nodes.

This way, the problem is reduced to simple voltage dividers.

Alternative(Edit): Perhaps the following method is easier to understand:

Not the answer you're looking for? Browse other questions tagged voltage operational-amplifier filter transfer-function or ask your own question.