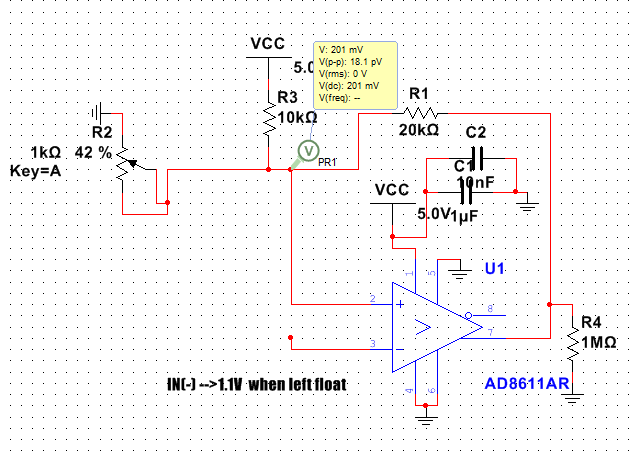 I have made a pcb . A part of the circuit is the Schmitt trigger comparator seen above . The positive feedback resistors are chosen to give the noniverting input values from zero to 0.5 volts . The inverting input will receive pulses of around 300mV amplitude and 20 ns width , but while the amplifier isn't connected anywhere (yet) a voltage of 1.1 volt appears on the pin . Any ideas why that happens ?

You should not leave an input pin floating! It is not designed to be used like that.

What you could do is add a 1 Mohm resistor between the - input pin and ground. At least then there is some defined voltage on the pin.

But when the input is floating, its voltage is determined by the internal circuit on the IC. Unfortunately, in the datasheet of the AD8611, there is no internal schematic so we can only guess what is there.

Typically these type of inputs consist of a base (or gate) of a differential pair. Also some ESD protection (often diodes) are connected. All these devices will have some leakage current. Even a small leakage current will produce some voltage across the high input resistance (often 10 Mohm) of your multimeter.

For fun you could also measure between the VCC and - input, you might expect to see 5.0 V - 1.1 V = 3.9 V right? But that's only true if the 1.1 V you measured at the - input is a "hard/strong" voltage (like there's a 1.1 V voltage source in the IC). My guess is that you will not measure 3.9 V between VCC and - input. What you will measure depends on the leakage current that is going to flow.

You're relying on unspecified behaviour, so undefined behaviour happens. A floating input does exactly that: float. The tiniest influence can pull it anywhere.

Physically, opamps are chips, and there's bound to be some capacitive coupling between the inputs.

I also doubt you're able to actually measure the actual voltage: A multimeter typically has lower impedance (or at least in the same order) than a high-Z opamp input. In the case of an AD8611, the input bias current is lower in magnitude than -6 µA.

So, if you don't want an input to float, don't let it float. Use high-valued resistors to tie it to either ground or VCC, whichever level you prefer. Based on the -6 µA bias current, some 470 kΩ should work.

BTW, when building something like this, use a comparator, not an OPamp; while the same in theory, you can get latch-up behaviour with Opamps that you wouldn't see in comparators; also, comparators can be had for much higher bandwidths cheaply.

Not the answer you're looking for? Browse other questions tagged comparator schmitt-trigger or ask your own question.

3
Do Schmitt-trigger specs give requirements to avoid metastability?
1
small sine wave with dc bias - translate to logic time signal
4
Some questions regarding the resistors and capacitors around an opamp
0
Inverting, single-supply comparator not working as expected
0
Why the don't the theoretical and practical output of comparator match for small input?
0
Comparator Undesired Behavior
0
How to use op-amp circuit as a threshold trigger