How is my crystal layout looking?

I've done a preliminary layout of my crystals. I've never designed a board with crystals so this is just a rough first pass based on my small set of working knowledge of crystal layout. How am I looking so far? Anything I could be doing better?

Details on the board:

Note: this picture doesn't show the MCU power/ground pins. I have them all bypassed with a bevy of 0.001uF, 0.01uF and 0.1uF ceramics on the outside perimeter of the MCU with direct connections to the 3V3 power plane and ground plane through short traces to vias under the chip

EDIT: Updated the crystal layout and picture. I pulled in the crystals towards the MCU and pulled in the load capacitors to the crystals. Even though I'm told it's not important, traces are nearly equal from crystal to MCU. The traces for Y2 are only off by 4 mils if my math is correct. :D 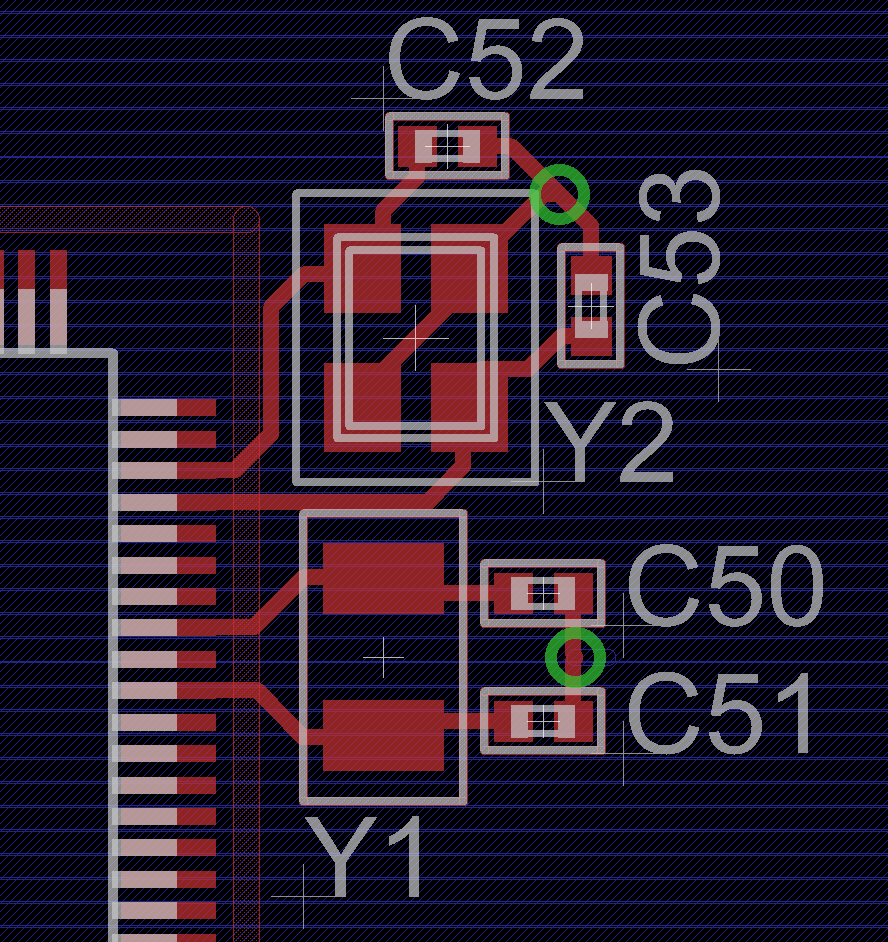 Ideally you want traces from MCU to crystal and from crystal to load caps to be as short as possible and as equal length as possible - in this regard your setup is not ideal, but for such low frequencies my guess you will be OK.

Once i've had lots of problems trying to make MC3PHAC to work as it is very picky regarding to crystal, my traces were of different length and quite long. After trying a horde of different load cap values, ended up using the ceramic resonator that was specified in a reference design.

Not the answer you're looking for? Browse other questions tagged pcb-design layout crystal or ask your own question.

8
How good is my xtal design on my pcb?
1
Validation of power supply decoupling and oscillator connections in a PCB

8
How far is "too far" when routing traces for crystals, and how asymmetrical is "too much"?
46
Competing PCB Crystal layout recommendations
7
Crystal, PCB Layout
6
Traces under 32kHz Crystal
0
Atmega328P 32.768KHz Crystal Issue
1
Crystal grounds and minimal trace distance to leads
1
Ways to lay this cyrstal out without increasing the PCB footprint?
2
nrf52 and Chip antenna Layout Questions
8
4-Lead SMD Crystal - Connect Both GNDs?
0
PCB Crystal layout for DSPIC33EP512MU810-E/BG