I am trying to select a transistor part and figure the actual current calculations in my circuit.

I have 30mA of collector (load current). This is the transistor I am choosing for my design : https://www.onsemi.com/pub/Collateral/MMBTA05LT1-D.PDF

The graph in fig 5, gives Ic vs Hfe, but the Vce is 1.0V. And in fig 6, Ic vs Vce(sat), the gain is fixed as 10. How will I take values from this graph when the conditions are different from my application.

My actual Ic is just 30mA. How will I fix my gain now?

I am going to operate the transistor in linear region. It would really help me if one could tell me which graphs we need to consider in the transistor datasheet for my current calculations.

And I am calculating Min, typ and max current values for my circuit. So, I am considering -40,+25 and +85degC temperatures. Can someone help me with the calculations.

hFE is stated to be a minimum of 100 at 10mA and at 100mA (and 25°C). Those are firm guarantees. There is no maximum hFE given. This transistor won't be the best to use if your circuit is heavily dependent on the value of hFE- it's more specified for switching applications.

With a 10:1 or more range in hFE you'll have to use something like emitter degeneration to properly bias the transistor in the linear range. Below 1V Vce the hFE will drop as the transistor saturates.

Note you can buy 'binned' transistors with a better controlled and characterized hFE but even with that the variation between parts may still be 2:1 before temperature is taken into account (eg. 120~240 hFE). 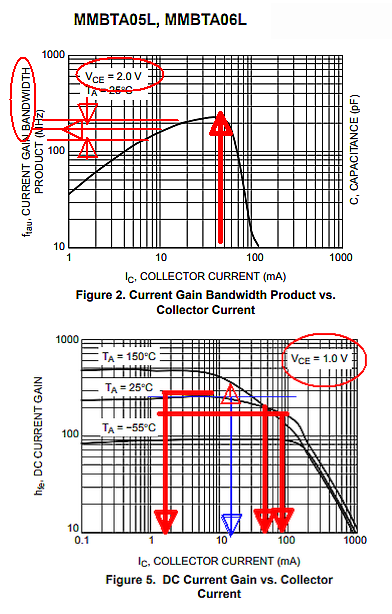 45mA is ideal for maximum bandwidth or GBW product but poor for large signal linearity.

So it depends on your specs for THD or peak +/- asymmetry at max swing.

So decide on your output power or swing, voltage gain, linearity or asymmetry or THD before you choose a Q point. Then decide your input and output impedance.

Fundamentally you want to to minimize the dynamic range in current to 1 decade as 2 decades of current swing will add ~>10% THD unless you use negative feedback bias, which is suggested if you need this.

Given the need for bias stabilization, and for large voltage swings, you should plan on about 1/3 of that, thus expect a gain of 10x per volt of VDD. Why? 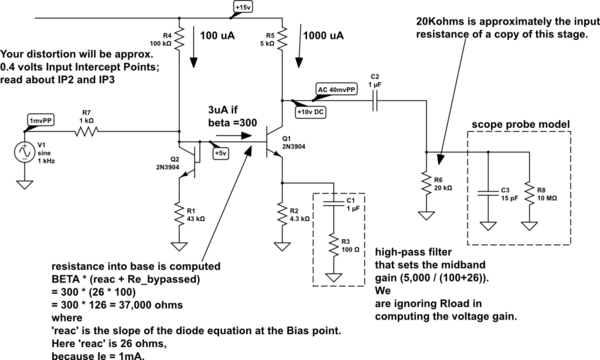 4
What is Normalized DC Current Gain (as oppossed to DC Current gain)?
3
How to read the datasheet of a Digital transistor?
1
Is it possible to overcome a transistor's current limit by running it at lower voltage?
1
Values for calculating PN2222A Base Resistor
1
BJT Transistors - On Characteristics
4
Do BJT (Darlington) transistors have a minimum collector current?
6
Can this transistor (2N2222) take 6 V on emitter-base? Am I reading the datasheet incorrectly?
2
Transistor Gain Values
0
Trying to understand a transistor data sheet