How to use a transistor to drive strings of LEDs from GPIO pins?

This is similar to How to drive a 20mA LED From a 4mA max GPIO Pin except that I need a little more hand-holding in order to understand what is happening.

For background, I'm a software engineer and currently only know enough about electronics to successfully test a 9V battery will my tongue.

I have an Arduino Uno board which I have rigged to separately control 3 LEDs blinking in a "chase lights" type of configuration. I have connected each GPIO pin directly to an LED, a resistor, and back to the board's +3V ground pin. The software strobes the GPIO pins at intervals to achieve the desired effect.

With one LED wired, everything looks great. When adding a second LED to each of the 3 small circuits (to "extend" my string of chasing-lights), the LEDs dim considerably. My plan was to eventually wire a string of 10 LEDs for each circuit for a total of 30 LEDs. Obviously, if I can't light 2 LEDs, 10 is out of the question.

So I thought of using a transistor for each circuit with the GPIO merely providing the "trigger" for lighting the strand of 10 LEDs. I have wired-up a few LEDs, a resistor, and the transistor, and connected it all to a 9V battery. It's dark, as expected. There is only one base pin on the transistor, so obviously the GPIO pin should be connected to that, but how should I correctly complete the circuit back to the Arduino board?

I experimented by taking a 3V battery and connecting the negative terminal to the transistor's emitter pin and then touching the base pin as a trigger and it seemed to work, thought the LEDs flickered a little. That might just be because my hands weren't super-steady. Is this the right approach for working with the Arduino's GPIO pins?

Here are all the electrical specs for the components I have in front of me, because the math matters, of course.

What's the "proper" way to use the Arduino's GPIO pins to light a string of 10 LEDs? Can it be done with the components above, or should it really be done with a more complex circuit?

I'm building this as a prototype for some elementary school students to build themselves, and I'd rather make the circuit as simple as possible.

(Bonus points for explaining where the resistors need to go, what their values need to be, and why they need to be there in the first place :)

I forgot to mention that I want to wire each string of 10 LEDs in series, not in parallel I want to minimize the amount of wire required. These LEDs will end up being maybe 4-5 inches apart and the entire string of 30 LEDs will make a big loop, so I don't want to string each LED individually. I'd like to have 3 large loops of 10 LEDs each with all of the controls in a single place.

One last requirement (I think): this has to run off of batteries. No mains power. :)

LEDs do not like to be driven from a voltage source -- you need to start with the voltage you're supplying, and work out how to give them the specified current. Your LEDs drop around 3.5V (check that, I'm going from memory and I'm lazy). Assuming you're driving this string from a 9V source, you can run pairs in series with one current-limit resistor -- that's the R2 I'm showing in the diagram.

Note that you probably don't want to get your 9V from a "9V" battery. A "9V" battery is 9V, fully charged with a light load, and you don't want to pull more than about 50mA from it. If you are going to pull 250mA (or even 125mA), then you should design your circuit to still work at around 6V -- which means just one LED per section, which means twice the current, you can't win for losing, etc. 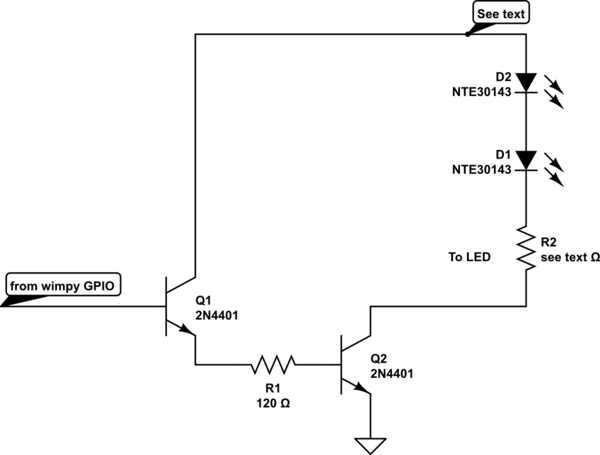 The resistors R1 to R10 are current limiting resistors, for each led from data sheet the forward current is 20mA @ 3.1V forward voltage. from this formula

where Vs is source voltage, Vf is led forward voltage and i is current. we get R nearly equal to 100 (nearest standard value). in parallel led circuit you need to add separate resistor for each led branch, since even though they are with same specifications, but their forward voltages are slight difference and results in some leds lit bright and other dull.. even some times they will burn out. so the best practice is addingindividual resistor in each branch (for individual led)

regarding transistor base calculations

NOTE: Arduino GPIO can deliver up to 40mA. so you can go for this .If you want to control this even with less base current (based on your question with 4mA, you need an extra transistor in darlington pair configuration

This is the simple Johnson counter method using 10 Cd ~ 20 Cd 5mm 5000k LEDs using only 5mA per LED which is really bright with these ones. 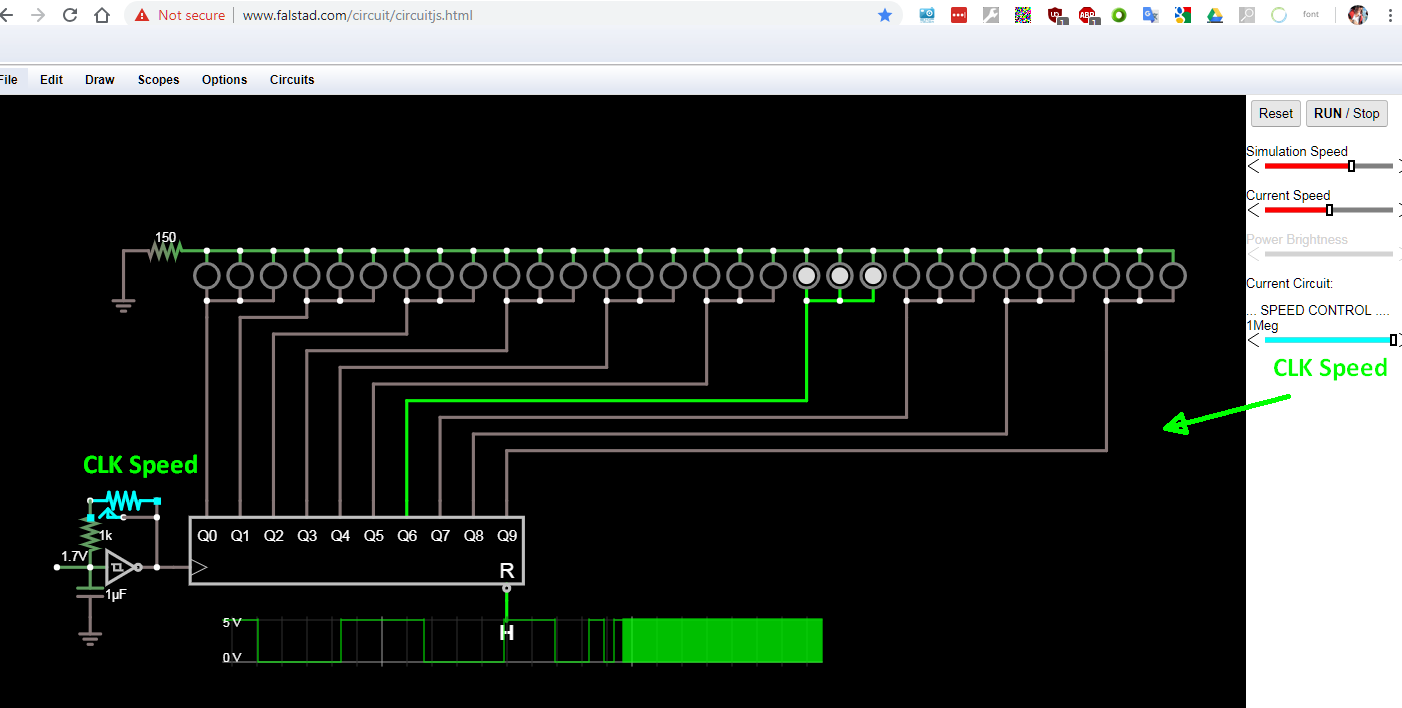 A smoother effect uses resistors and transistors like this.

The 50 Ohm resistor controls the brightness and average current and can be paired to 25 Ohms. 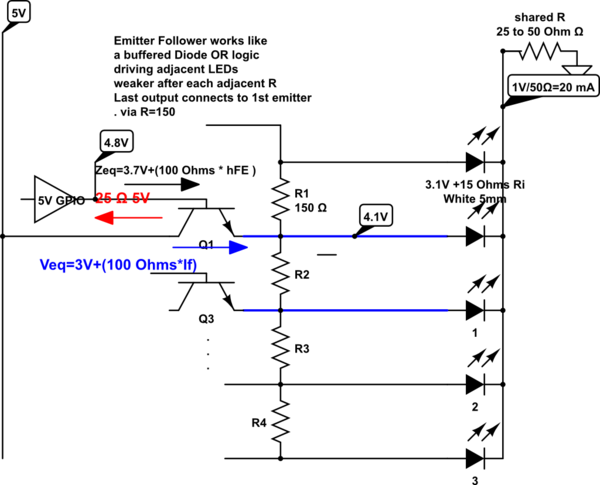 If I assumed wrong and it is a 3.3GPIO, then another design is needed. UPDATE aha 3V argh..

With Vcc=3V to 5V the switch resistance < 20 Ohms. which inverts all inputs and the LEDs to common ANODE to 5.0V with no 50 ohm shared resistor now using the open drain resistance.

Not the answer you're looking for? Browse other questions tagged transistors led gpio or ask your own question.

16
How to drive a 20mA LED From a 4mA max GPIO Pin
9
Turning on multiple leds with arduino using transistor
8
9-volt battery connected to transistor controlling LEDs with Arduino
0
Switch on set of 6V battery powered lights from raspberry Pi
1
How to drive a relay from ESP8266 gpio
0
How to drive a 10 Watt LED from an Arduino?
2
Converting pre-lit Christmas tree with incandescent mini-lights to use LEDs
2
Why isn't my transistor outputting enough voltage when switched?