My goal is to be able to send/receive IR messages in my custom format and send messages ~10 bytes long. My message object will get serialized down to individual bits, which are transmitted by turning the IR LED on/off at specific timings of my choosing to represent logical ones and zeros. From what I've seen, an IR LED can be turned on/off in either a while loop or as a PWM signal to transmit the message. I'm under the assumption the only thing gained by using a PWM signal is that the work there in the timer callback will run seemingly in parallel with other code. For simplicity, I opted for the while loop approach.

The issue I am seeing is either one of two. Either the receiver is not reading the timings right, or the transmitter is not turning the LED on/off as fast as I would expect.

In the code below, the IR LED is turned on for 600 microseconds, and off for 300. (Eventually, my custom messages will be built up using something along these lines.) However, as you can see in the Sample Outputs below the receiver is not seeing the IR signal as on or off for anywhere near that amount of time.

Not sure if this is a setup issue, or something else. The two boards I'm using are both Arduino Pro ATmega328p 3.3v boards. For the board sending the IR signal, Pin 6 goes to a 330 Ohm resistor, then to the LED, then to ground. The IR Receiver on the other board has no resistors, just direct connections to pins. When reading the IR signals, I hold the receiver a few centimeters away from the LED.

Since the eventual goal is to get this written in C++, I'm trying to avoid as many Arduino specific APIs as possible.

I've looked online and haven't found definitive answers to some questions. My questions are:

IR Receive Code (taken from an online example, only modifications are to output text):

No, this is not a viable approach. The IR receiver you selected is not a simple photodiode or phototransistor. The receiver expects to see IR light that is modulated at 38kHz, so your simple on-off switching of the LED will not work.

You better stick with the data sheet with synchronous pulse modulation. 38kHz 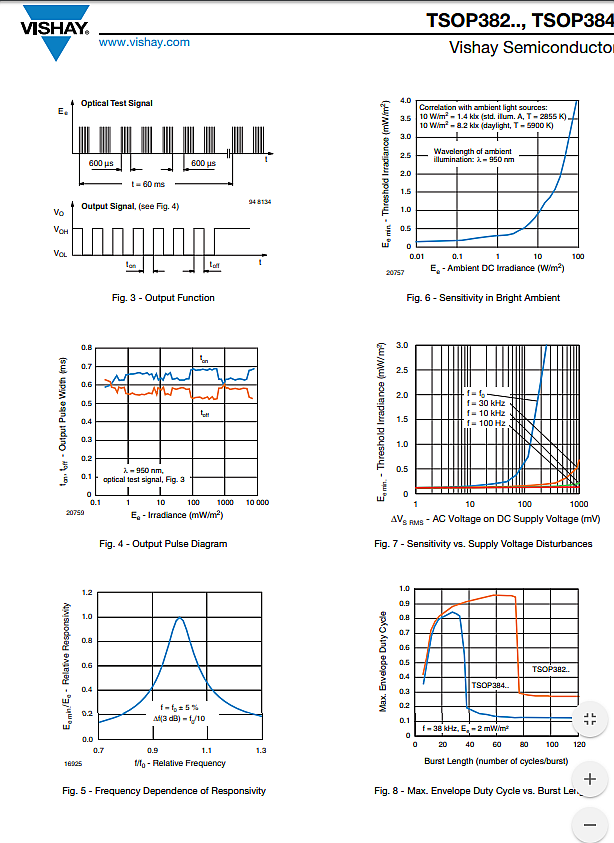 You can drive the LEDs in series with 100mA Abs Max steady or 200 mA pk. if 5mm, 20mA is wrong. Use a push-pull driver with current limiting R. A 38kHz Clk and D FF clk & data is easy in HW for synchronous Tx.

One last thing is with 10% BW or 3.8kZ the rise time = 0.35/BW = 92 us but this only occurs at high intensity. When the dark level is a low (dark) current source the response time slows down so your 300us gap will stretch out when the signal range is extended. This dark level is detected and set with the brightness level to determine the optimal data slice threshold, so the burst length ON and OFF needs to be equal for optimum performance.

You can roll your own protocol or use a std optimized for range. As long as you understand the tradeoffs 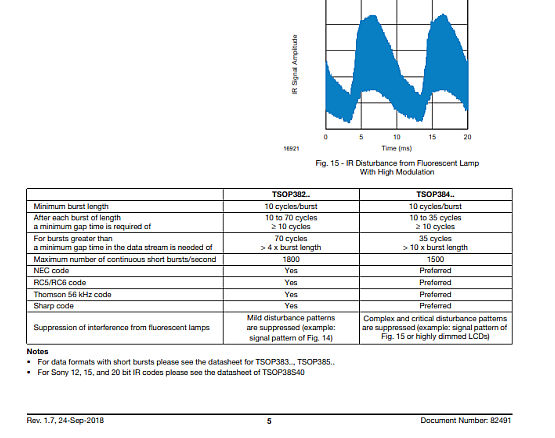