What is the purpose of capacitors parallel to crystal? [duplicate]

The capacitors implement a phase inversion 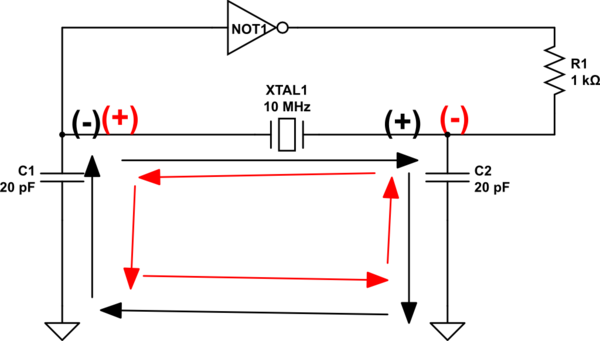 The capacitors are effectively in series with each other and the combination is in parallel with the crystal. The total "load capacitance" is thus (ignoring the oscillator circuit and stray capacitances)

In a typically microcontroller or similar circuit there is an amplifier input connected to one side and a current amplifier output connected to the other. Both have a bit of additional capacitance that adds to the load. It's called a series resonant circuit

The oscillator is called a Pierce Oscillator.

There are two things that help you determine the value. First there may be suggested or limit on the maximum capacitance from the microcontroller or chip manufacturer. Best stay within that or your oscillator may not start reliably. Secondly, you would like, for maximum accuracy, to match the specified load capacitance on the crystal datasheet. That means taking into account the input, output and stray capacitances. The effective total load on the crystal is:

So you want to pick C1 (usually = C2) such that CL is close to the number on the crystal datasheet.

In general, it's not that fussy usually and you can use a few pF (like 5pF) for the values of Ci and Co and Cs. Because the crystal itself is a very high "Q" resonator, slight mismatches in the capacitance won't have much effect. If you're trying to keep time-of-day, you may wish to be more fussy and/or adjust the load capacitance, but usually 100ppm either way doesn't make so much difference.

Such capacitor topology is used to fine tune the crystals resonate frequency closer to what is on the label. The manufacture of the crystal makes them so they run a very tiny bit fast until you install the capacitors of the specified values. They will then run closer to the 'ideal' specified frequency.

Also these need to be good quality low drift X7R or no drift NPO types. Note that extreme changes in ambient temperature will cause the crystal to drift off the ideal frequency. If very tight accuracy over time is required then crystal oscillators are mandatory. For extreme long-term accuracy TCXO (Oven controlled oscillators) are required.

Not the answer you're looking for? Browse other questions tagged crystal or ask your own question.

5
Choosing a crystal and load capacitors for micro controller
8
crystal oscillators connected in parallel
2
Electrostatic charge changes crystal frequency
2
Can I use a series crystal in an parallel crystal optimized oscillator?
6
Parallel and series cut crystal difference
0
Using a 16MHz crystal with an atmega328, it works only if I remove the two capacitors connected to the crystal
2
Understanding this crystal connection
0
What is the best way to connect an MCU with a crystal and its two capacitors?
0
What capacitors do I use for an 8 MHz crystal?