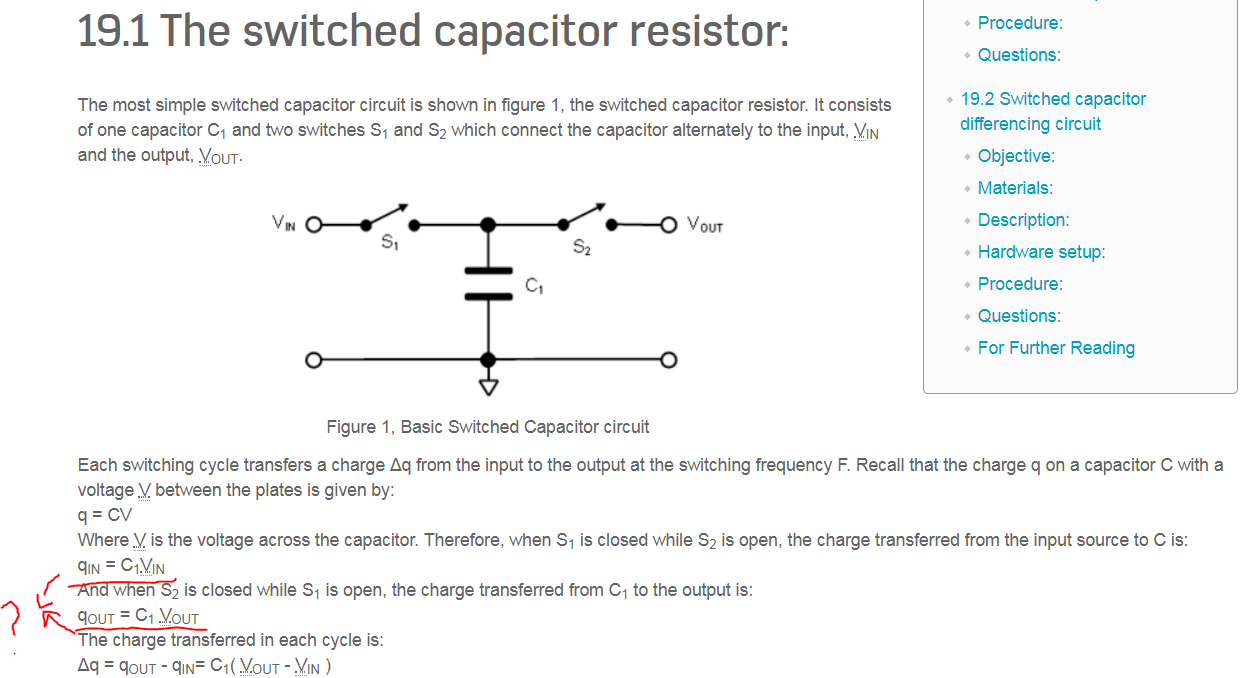 Hi, I have some confusion about this (It's a stupid question).

Yes that's a particularly confusing piece of text. Your analysis is basically correct:

1) With S1 closed and S2 open, the capacitor charges or discharges until the voltage across it is Vin, and the charge is C1 * Vin. (they've called this qin)

2) With S1 open and S2 open, and an ideal capacitor the capacitor's charge does not disipate and the voltage remains the same.

3) With S1 open and S2 closed, the capacitor charges or discharges until the voltage acorss it is Vout, and the charge is C1 * Vout (they've called this qout).

During step 3, the charge on the capacitor starts at qin and ends up as qout so during that step a charge of qin-qout is transferred to the output

So after one complete cycle a charge of (qin-qout) is transferred from the input to the output.

As an aside the problem with this sort of design is that you'll end up dissipating a lot of energy in resistance of the wires and switches, due to equipartition as the charge flows in and out to/from the decoupling capacitors on Vin and Vout. Most uses of this sort of capacitor switching power supply are used where Vin is equal to Vout, either to turn a +ve voltage into a -ve voltage (the switches turn the capacitor upside down), or as a doubler (the switches take the capacitor and stack it ontop of the supply voltage). Both types can be seen in the popular MAX232 series of line drivers.

When S1 opens and S2 closes AND the voltage on C1 does not equal Vout (set by external processes), then either: -

This means that when S2 opens and S1 closes: -

I understand your problem....Surprisingly, in many books and other contributions you can find a figure similar to the one shown by you. But one important part is missing: The theory of such an S/C block requires that the output is connected either to a large capacitor (much larger than the switched one) or to ground. In most applications, however, the output is connected to the virtual ground provided by the inverting input node of an opamp (charge transfer to the feedback capacitor).

Explanation: The principle of the S/C techniques is based on a CHARGE TRANSFER from one capacitor to another one or to a current-processing unit. The switched capacitor must be discharged during one clock cycle. Hence, in nearly all cases, the Vout node is connected to the inverting input of an opamp) .

It is NOT sufficient to explain the S/C principle with an open output node.