Interrupt works only once - PIC16F877a

In my code, I have two interruptions, one is coming from the overflow of the TMR0, and the other one is when a button is pressed.

this is the code in MikroC :

what I am trying to achieve with my code is as the following : 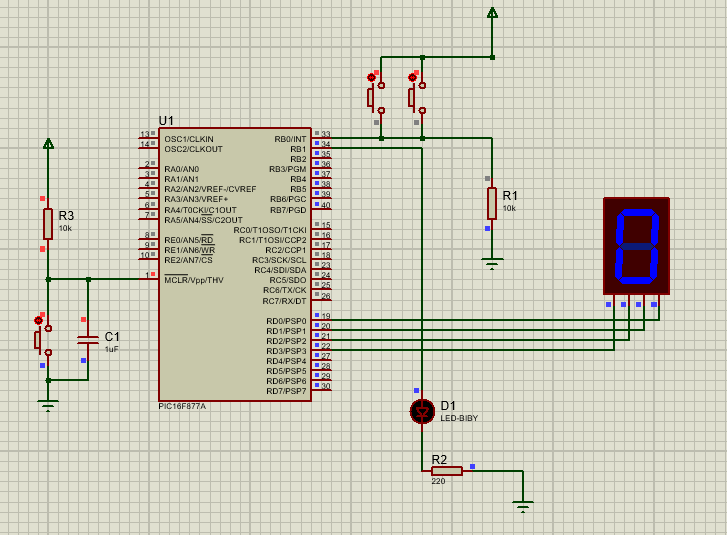 What I'm facing here, is that the interruption from IRB0 works only once, the second time I press the button, nothing happens.

I am not sure if the TMR0F has something to do with that or not, tried many things, but couldn't make it to work.

I Hope that you could see something i didn't notice, and help me.

There are some low level problems with your code that have to be handled first. These problems have the potential to break your code even if the logic would otherwise seem correct.

Volatile tells the compiler that a variable can change in between different accesses even if the code does not appear to modify it. This prevents certain reads and writes being optimized away because the optimizer does not understand there's an ISR working with those same variables asynchronously.

A possible solution to this is to use a mutex or turn off interrupts during any relevant non-atomic operation.

Not the answer you're looking for? Browse other questions tagged pic interrupts pic16f877a or ask your own question.

5
Overflow interrupt firing only once
2
Returning from interrupts at a different location from where the interrupt occurs. (PIC16F877A)
1
Programming PIC16F877a using PICKIT3
0
Getting different values while connecting LM35 with PIC16F877A
6
"Not enough RAM " error in PIC16F877a
2
PIC16F877A External Crystal giving 60Hz
0
PIC16F877A not working with 4MHz oscillator
0
External interrupt debugging with PIC16F877A