I know there are already questions and answers about P-Channel MOSFETs and power source selection, but I still find myself pretty confused, as many of those are more complex than my circuit or simply connected differently. I'll lay out my design and then list a few questions. Any thoughts would be greatly appreciated!

I'm powering an ATMEGA328P using approximately 5V (so it can run at 16MHz). Normally, it will run on 3 AAAs in series (4.5V total). When I connect a 5V FTDI USB-to-serial board to program it, I'd like power from the battery to be cut to keep from damaging the battery (I don't want to have to put a diode there). I'm planning to use a logic-level P-Channel MOSFET. I expect to draw about 50mA max, but may plan for 100mA just to be safe. 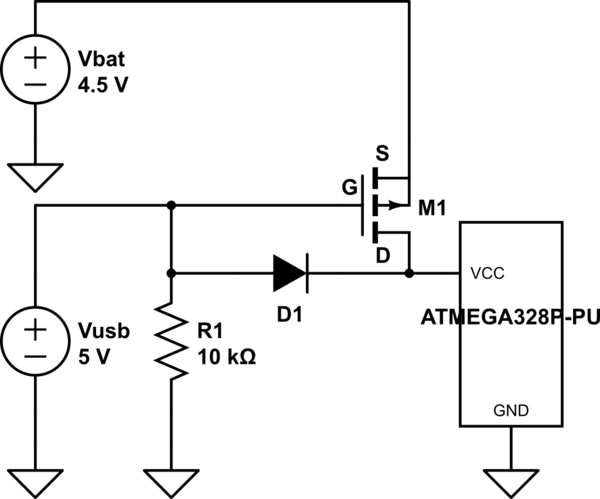 Thanks again! I've asked multiple questions on this forum and y'all are always so helpful.

I was close, but this seems to be a working circuit, based on this app note for a load-sharing circuit and this SO question. Essentially, I needed to reverse which side of the MOSFET the load goes on. See below: 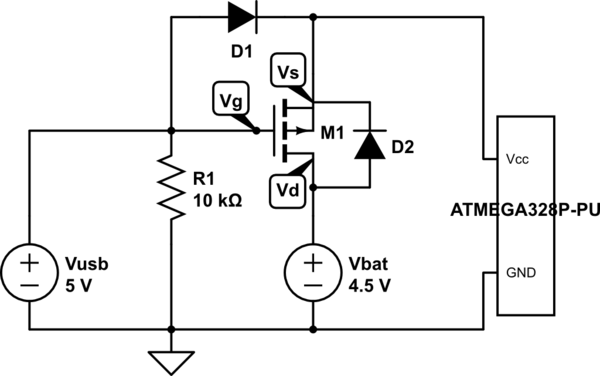 When USB is connected, Vs = Vg - Vf1 ==> Vg - Vs = Vf1 = Vgs, where Vf1 is the forward voltage drop across D1. Then D1 can be selected such that its forward voltage falls under the Vgs(th) of the MOSFET, keeping it open. If Vgs(th) is about -2V to -4V (based on a typical logic-level P-Channel MOSFET), then we just need a diode with a drop of less than 2V, which is very easy. We also need to maintain as close to 5V as possible for the ATMEGA chip, so a schottky is best, as it can provide less than 1V drop.

When the USB is disconnected, Vg is pulled to 0V, and Vs = Vcc = Vbat - Rds(on)*50mA (for an approximate 50mA current). Thus Vs is close to 4.5V and Vgs ~= -4.5V, and the MOSFET will conduct. Selecting a MOSFET with a low Rds(on) will keep from losing too much voltage. The D1 diode keeps the gate Vg from being equal to Vs at this point, as it will be reverse biased.

Not the answer you're looking for? Browse other questions tagged arduino power-supply mosfet circuit-analysis arduino-uno or ask your own question.

16
Do MOSFETs have a diode built into them?
3
Load Sharing charging circuit for Lithium polymer