Ask Question
Asked 12 months ago
Active 12 months ago
Viewed 95 times
0
\$\begingroup\$
Closed. This question needs to be more focused. It is not currently accepting answers.

How current flow remains continue in a conductor when all the free electrons reach from negative terminal to positive terminal?

Suppose, we connect another device between the plates which could drive the electrons back from plate 1 to plate 2 (shown below). Note that electrons are moved against the potential difference so some work has to be done against the electric field for such movement. In this case, we can maintain the potential difference between the plates and the current can flow in steady state. 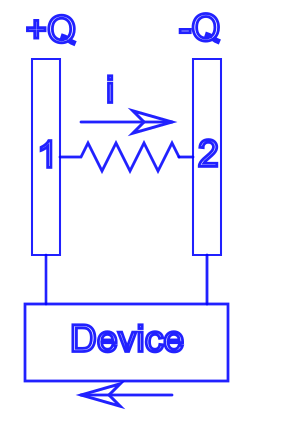 The device could be a battery which uses chemical energy to work against the electric field or a thermopile which uses thermal energy for the same. This device is known as the Electromotive force (EMF) device and has to be connected to ensure steady current flow.
In simple words, the battery by doing work against electric field, ensures that the charge on the plates is not neutralized and current will flow in steady state.

How current flow remains continue in a conductor when all the free electrons reach from negative terminal to positive terminal?

For every electron that reaches the positive terminal, another electron was pushed out the negative terminal.

So the total number of electrons in the circuit remains (very nearly) constant no matter how long you operate the circuit.

Imagine a tube, maybe a meter long or so, with an inner diameter slightly larger than the diameter of a ping pong ball.

Fill this tube with as many ping pong balls as will fit.

Now, if you push another ping pong ball into one end, another one will pop out the other end.

Now pretend the tube is in a loop, filled with ping pong balls, but one part of the tube has a little roller (like a automatic tennis ball shooter) that can accelerate the balls and push them in one direction.

When it does this, it creates a gap directly behind. This is the + terminal. This is an empty void, that is relatively positive, or a positive hole, or a bubble, and the electrons want to fill this because it is less negative than other electrons. The other side of the roller, where the ball shoots out of at speed, is the – terminal. This is where energetic electrons are coming from, and by controlling the path they take, we can trick them into doing some useful work for us on their way to the + area behind the roller. The balls/electrons all move very slowly, but changes (like pushing a ping pong ball into the tube) propagate much faster - push a ball in, another pops out almost instantly. In reality, it is not instant, but occurs at the speed of sound in, uh, ping pong balls. For electrons, it occurs at the speed of light in the conductive medium.

So there are no electrons being generated, there are already a bunch of electrons in a conduction band in any conductor, but they are just sitting there not doing much. If you start moving them though, it will very quickly result in movement of all of them, and you get current. Again, tube filled with ping pong balls. You can have them all moving while the number of them stays constant.

Let's also talk briefly about, say, a battery and voltage. Voltage is a difference of potential. This is analogous to potential energy gained by height in a gravity well (like Earth). A rock on the ground doesn't really have any potential energy, but if you go up several flights of stairs, now it has a good deal of it. Through electrochemical means, a battery is, in a sense, a sort of upwards conveyer that takes rocks (electrons), moves them up a hill, and then they are free to roll down though our circuit, and eventually arrive back at the conveyer again.

The term ground fits very nicely with this as well.

Not the answer you're looking for? Browse other questions tagged current conductors or ask your own question.

0
Flow of electrons when two charged plates are connected by wire
4
Why doesn't current flow through the common part of a circuit?
0
Do 2 conductors (1 grounded via resistor) reach equipotential, before surplus electrons drain to earth?
0
If Conventional Current is wrong, how can I trace the flow of current in a schematic?
1
DC Voltage Polarity and Current Flow?
3
So which direction do electrons really flow?
0
Current flow in circuits and nature
2
Confusion about current flow