I’m setting up a solar panel system (200W) that’s used to charge batteries that will power small appliances in a converted van. Solid state inverters are expensive and difficult to fix and it seems something like a rotary inverter (generator) would be neither of those things. Perhaps I’m wrong, but that’s what I’m here to find out.

The requirements for the generator are that it can power sustained low power loads (<500W) and surges (900W) at ~120V 60Hz pure sine wave.

A soft requirement is the ability to change it’s output depending on the load. From what I’ve seen of solid-state inverters, they get very inefficient the lower you are from its rated load. The rotary inverter is a solution I’m exploring that solves that.

The reason I'm asking this question is because it seems BLDC motors can achieve high efficiencies (>90%), and if BLDC generators can do the same it seems like it may be worth it.

If they can, what implementation of this do you think is the best balance between cost and power efficiency assuming all new parts? Would permitting used parts change your answer?

Chinese made grid tie inverters are currently being marketed at a price of roughly 1kW/100$USD It might be hard to find a only 1kW/1HP BLDC motor for this price, but if you can, then go for the motor generator converter. An AC generator would then need to acquired also. I don't know if the price get's better or worse with scaling (like a 5000kW rotary or a 1MW rotary) but I do know that at power generation facilities they typically use solid state conversion to convert from AC to DC (and the diodes are huge!) 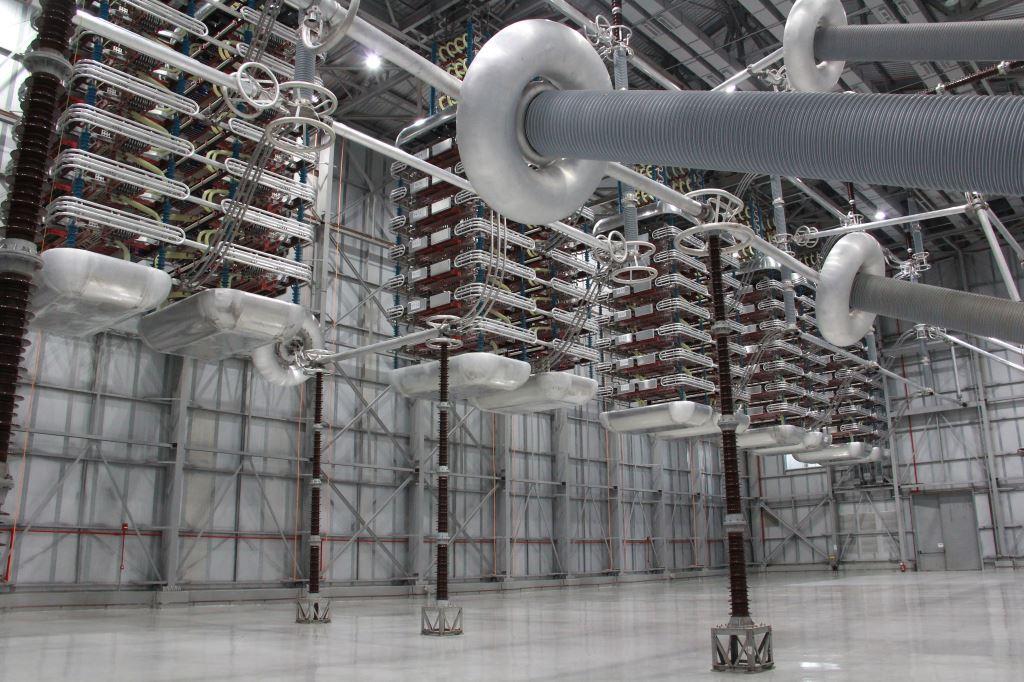 You'll want to check out this paper Utilization of DC motor-AC generator system to convert the solar direct current into 220v alternating current, which describes an DC to AC rotary generation system and the efficiencies. They also show that it's cheaper and more efficient. However, the efficiency curve that they used might be outdated as I've found one for a solid state inverter that is much higher than they show: 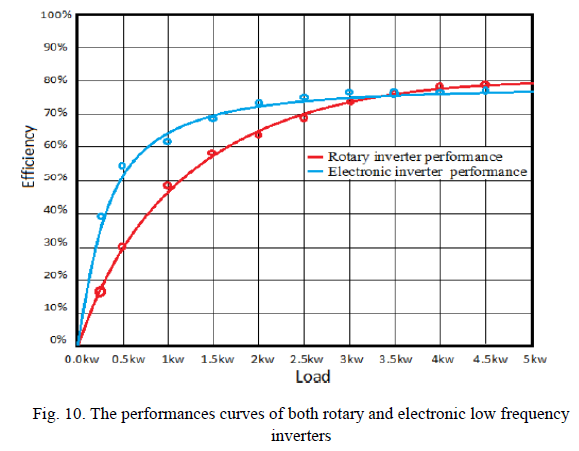 I'd imagine that the efficiency for the plot above would scale to a 1kW system well. In the paper they describe losses from internal heating as being large.

A soft requirement is the ability to change it’s output depending on the load. From what I’ve seen of solid-state inverters, they get very inefficient the lower you are from its rated load. The rotary inverter is a solution I’m exploring that solves that.

One thing to note about efficiency is it doesn't matter what the system is, the efficiency will drop as the power goes down. Why? because any system has a controller or circuitry that uses quiescent current. Let's say the controller takes 2W to run (you'll have to have one for both systems) for a 1kW system. If the system is converting a full load or 1kW then 2W would be 0.2% of the power to run the system. If your converting 100W or 10% of the full load the system can handle then it's 1% and finally if your converting 10W it would be 10% so in each case the efficiency will go down as the rated load goes down (as you see in the plots above).

If they can, what implementation of this do you think is the best balance between cost and power efficiency assuming all new parts?

I don't think so but if you had some parts on hand you might be able to build one cheaper. Even searching around on ebay just one 1-1.5 HP AC motor cost about 100$ to 150%, then you'd have to buy a controller and a DC motor. You can get a 1kW grid tie inverter for that much that is more efficient.

Even at 500W a solid state grid tie inverter can be had for 60$ that would cover the cost of only a used 1/2 HP AC motor on ebay currently.

The other caveat is even with the motor generator converter with solar energy you would still need an MPPT tracker to get the best power efficiency of the system.

Not the answer you're looking for? Browse other questions tagged inverter brushless-dc-motor generator converter rotary or ask your own question.

1
DIY Rotary Phase Converter with starter motor, cutout relay in parallel with load?
5
What is masking-time and chattering in rotary encoders?
2
Do EVs with a DC motor require an inverter and/or/nor a converter between the battery?
4
DIY generator. Simple and small
4
Inverter Circuit using IR2113, TLC555 and signal inverter IC
1
120v Inverter and GFCI
1
Question based on rotary potentiometer and resolution