I am working on a project which require to trigger a SPDT switch using a button to pass a small signal voltage across (~3.3V).

Due to the small voltage, try to make it small & saving cost, I wish to avoid using mechanical relay. I found a SPDT analog switch TS5A3157 by Texas Instruments

My question is, will this IC work & pass signal to NC node when VDD is 0V (battery died). Or is there any alternative solution to do this?

No, it won't work when Vdd is 0V, the MOSFETs need a bias voltage to keep them open.

As Olin says it would help to know exactly what you are trying to do to determine the best solution, but for an electronic normally closed switch, here is a simple idea:

Most MOSFETs are enhancement mode, which means the MOSFET is off with 0V gate-source bias (Vgs) and turns on with a positive Vgs bias (for a N-ch, opposite for a P-ch)
What you need in this situation is a depletion mode device, which means with 0Vgs, the FET is on, and turns off with a negative Vgs (assuming N-ch again)

A typical JFET is a depletion mode device, and you can also get hold of depletion mode MOSFETs such as the BSS139.
So using something like the above, here is a simple circuit (that could be elaborated on if necessary): 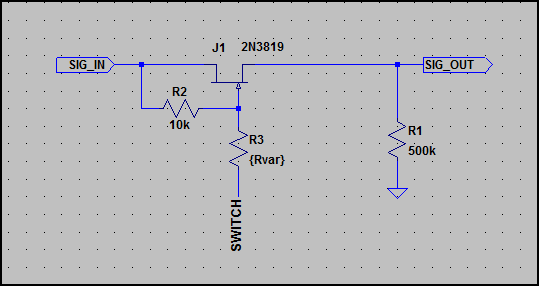 Ignore the resistor R3, this is just to simulate a switch by setting it from low to very high impedance - the SWITCH node would be connected to your bias voltage needed to turn the FET off (so it's connected to -10V in this example)

Above we can see the SIG_OUT when the JFET gate is left floating (Red trace) and then when biased with -10V (Blue trace)
The signal in is 200mV pk-pk with a DC offset of 0V, so this can be used for dual polarity signals. Depending on the JFET used, the gate does not have to be biased so low, the smaller the Vgs required to turn it fully off the better.
Note that the ON resistance of this switch will be quite high, so you cannot load it too much - if you need to drive something then you will need a buffer in between.

If you don't want to use a negative rail, the same concept can be applied to a P-ch JFET:

I haven't included the simulation as it's exactly the same as above. The bias voltage used was floating (e.g. if using a switch on the gate it's open) and +10V to turn off (so switch would be wired to +10V)

The FET part numbers shown can obviously be changed if desired, I'm sure there are better parts out there - they were just picked from the small selection LTSpice has.

Read the datasheet. It lists operating characteristics for several supply voltage ranges, with 0 V not among them. Therefore operation is not specified for 0 V supply, so there is no guarantee what you may get.

So from a design point of view the answer is no, it won't work at 0 V.

Not the answer you're looking for? Browse other questions tagged switches analog integrated-circuit relay or ask your own question.