I was thinking of building a DIY IR Spectroscope but for this, I need to find an IR diode that can do variable wavelengths. So far I have looked at Farnell and Mouser but all the diodes I have looked at seem to be fixed on a wavelength.

Is this possible? or would I need some sort of filters and optical equipment, if so which parts would I need?

There may be an near-infrared narrow band wavelength optical converter that would do the job. But not likely an affordable solution.

The more common NIR light source would be to use a broadband (200-2000 nm) Quartz Tungsten-Halogen (QTH) light source.

StellarNet has some inexpensive calibrated light sources in the $400 to $2,000 range.

You may want to use a QTH light lamp for under $200. Or if a very tight budget buy a QTH light bulb for about $10. ThorLabs QTH Lamps 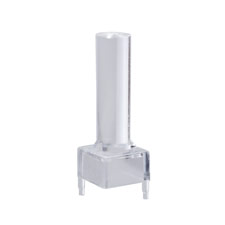 The wavelength of the photons emitted by an LED is defined by the bandgap of the semiconductor junction; that's a material composition constant. It can't be adjusted, far as I can see, by means of anything but a temperature change which probably isn't feasible for an LED potted in plastics connected with solder.

So, nope, you won't get a variable-wavelength LED: LEDs are, by principle, fixed wavelength.

If you need an adjustable range of wavelengths: Get a source of broadband radiation (e.g. a broadband IR LED, which is essentially a pretty impure LED, or, even simpler, an incandescent bulb), get a prism adequate to diffract a beam of that light (think making an infrared rainbow) and a mechanism that rotates that prism so that you can select the wavelength you desire with e.g. a slot (followed, typically, by some focussing optics).

There's tunable lasers but I'm more or less certain these are out of your price range of interest.

Not the answer you're looking for? Browse other questions tagged led infrared physics or ask your own question.