There are 2 types of FSM:

For example, if we take a look to how an SDRAM controller is made, most of the controllers are composed by combinational block + clocked block, and only just a few of them are written using just one clocked block.

-What are the main considerations to choose one type or another?

-Regarding to the SDRAM controller, why most of the people choose the first type?

There are 2 types of FSM:

The two types of FSM are Mealy machines and Moore machines. 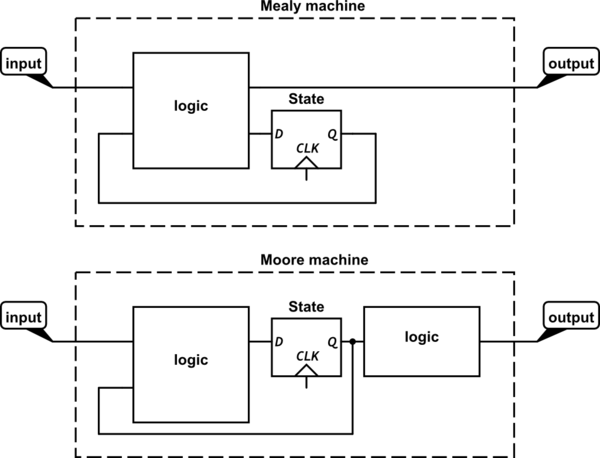 The types of FSMs you're trying to describe in your question are a little unclear. It sounds as though you are referring to two ways of structuring a FSM in a hardware description language. These don't correspond to different types of FSMs; they're simply differences in coding style. Neither one is inherently better.

In either case, there is combinational logic that determines the next state and the outputs. Then there is sequential logic representing the "state" registers. Some people prefer to model these in separate blocks for clarity.

You can always model both FSM styles with two blocks, but you cannot model the Mealy-style with one block - the input values used for the output logic will be a clock cycle behind. Since FSMs wind up being a mixture of the two styles, it's safer to model them with two blocks.

The main advantages of the two always block coding style are:

The main disadvantage is:

At first, it seems kind of counter-intuitive that the two-always-block style would have fewer lines of code, since it is split over two separate always blocks. The main reason is there is less repetition by having to specify the outputs of the current state only once. With the one-always-block coding style, the output assignments must be made for every transition arc to the state, leading to more repetition. (Also, it can be less intuitive to think "when I transition to this next state, the output values should be..." instead of "in this state, the output values should be").

Read the paper for a more detailed comparison (53 pages), including the code used for each FSM coding style. Some of the code is slightly dated (the paper is from 2003), and a lot more synthesizers now do support the constructs in section 10.0 "SystemVerilog enhancements" such as using enums for the states, and always_comb/always_ff.

With regards to the timing/area argument, a sufficiently advanced FSM synthesizer should give very similar timing/area for the different coding styles, although it might be easier for a synthesizer to infer a more efficient FSM implementation using the two-always-block style. This may be relevant for your example of an SDRAM controller, although I wouldn't personally consider it to be a deciding factor for how to code FSMs.

Perhaps I'm a bit too practically-minded - to me there are two types of state machines:

Any other differentiation is of merely academic interest.

I write them the same as I write all my logic - inside a single clocked process which describes the functionality that I need.

Not the answer you're looking for? Browse other questions tagged fpga verilog state-machines or ask your own question.

2
Confusion over clocks in FPGAs / Verilog
0
Building a first State Machine circuit - Technical Help
2
I can't get a meaningful output from a circuit in Thomas & Moorby's exercise 2.7
2
Single input for consecutive state transitions in an FSM: preventing fall-through
7
How do I design a clocked synchronous state machine for a combinational lock?
5
Is there a "standard" way to verify HDL of a state machine?
2
Why Verilog doesn't introduce a FF for reg type variable in always@* block and why reg is allowed in combinational circuits
0
how to implement several large state machines in hardware?