I am working on building a circuit that is controlled with an Arduino Pro Micro. It is being fed by a 3.7V 5000mAh battery which is also going to be used to charge the phone, but only when the Arduino program tells it to. That battery is hooked up to a charging board with variable voltage output (basically a DC-DC step up module built in to the battery charging module. I have it set at an even 5V of output). That 5V supply is used to power everything in my circuit.

The easiest option for this scenario would be to use a Relay switch, but a normal relay switch is big, noisy, and unnecessary (as long as I can do without it), and I don't have any solid state relays designed for DC power.

Instead, I want the arduino to switch a transistor on and off to send the phone 5V @ ~1 Amp, which my battery can handle (when I wire the phone directly to the battery, the current reads just over 1 amp at 5 volts).

The problem is, I don't know enough about transistors and general electronics to get this to work. The circuit that I have right now is pictured below: 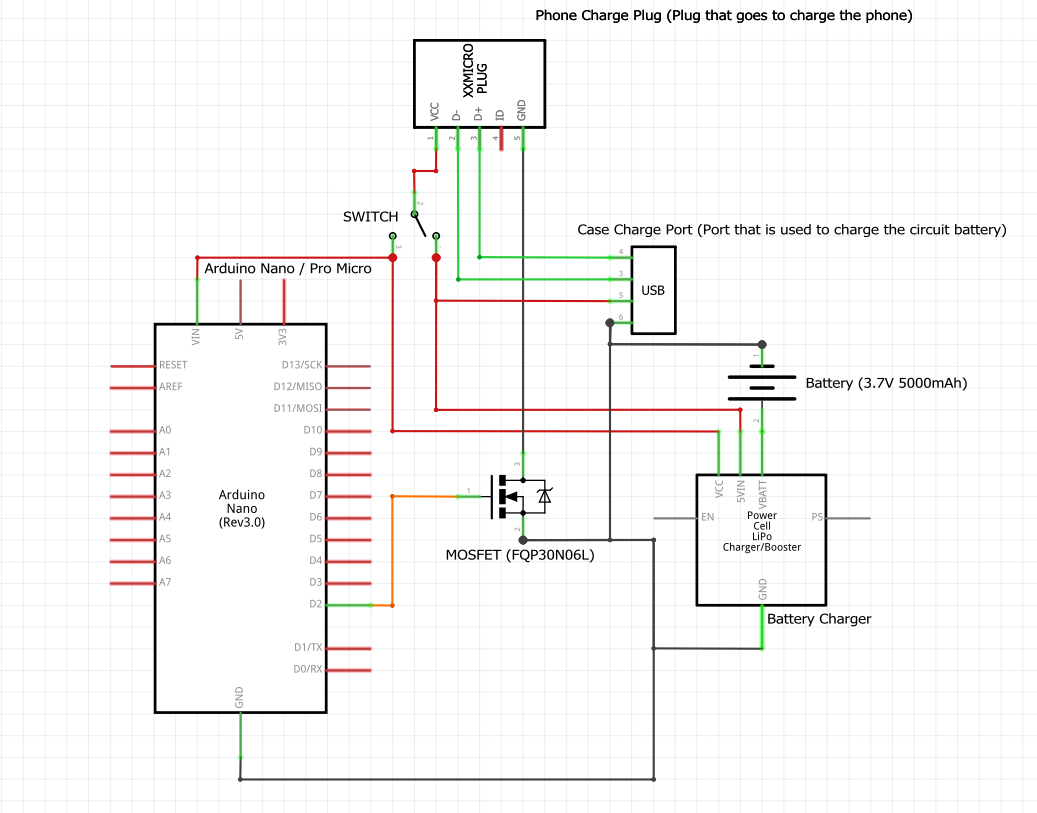 This circuit does not work right now. It works if I am testing the load with an LED to simulate the phone being charged, but when I actually connect the usb charging cord to the phone itself the circuit fails to switch on and off and instead just powers the phone constantly (I think, I could be wrong. If these details are important I can do more testing).

I am hoping someone here who knows more about electronics, specifically transistors, can help me figure out what my problem is, or offer suggestions as to how they would do it. Thanks for any help!

If anyone else has this question, the thing that solved it was connecting a 10K resister from the gate on the mosfet to ground, and I also added a 1K resistor between the digital pin and the mosfet.

Not the answer you're looking for? Browse other questions tagged arduino transistors mosfet or ask your own question.

17
Equivalent circuit of a solid state relay
5
Using/Charging a backup battery in a 12VDC circuit
0
Can I connect Arduino ground to the negative terminal of a battery?
1
Overcharge Lithium-Ion when using charge controller + Arduino Load
0
Arduino power on button problem
0
H Bridge not working with two DC motors on paralell — Arduino
5
Power off arduino via software
0
Using switching to control load sharing of DC?
0
Voltage divider circuit getting hot
0
Hooking into Qi charger status LED to power something more