Why is frequency compensation required here? 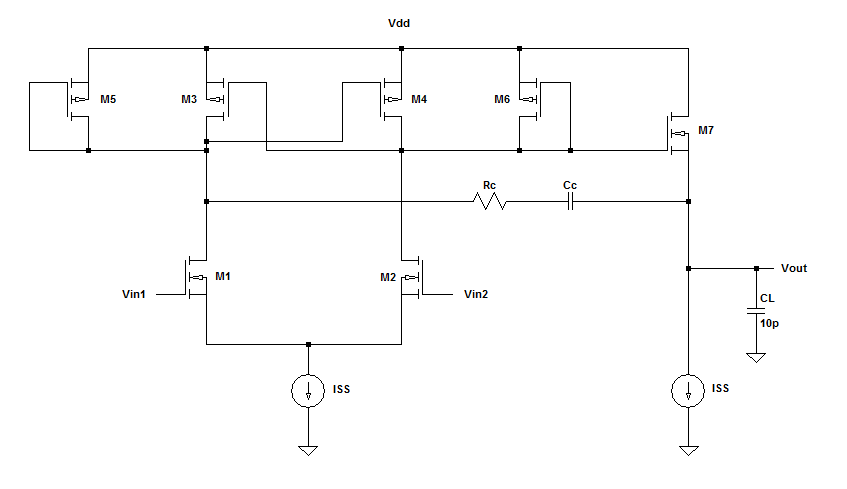 The circuit is completely symmetric, so M1=M2, M3=M4, and M5=M6. Therefore the DC gain of the first stage without the buffer is

From now on let's follow two different approaches in order to satisfy the above requirements.

The circuit without the source follower M7 and the compensation network.

In this case the load capacitor, CL(=10pF), is directly connected to the drain of M2. Let's first try to find an equation for the unity gain frequency, \$f_u\$. The circuit has two poles with the dominant pole situated at the output node. If we assume that the next dominant pole is located far from the dominant pole, the transfer function can be approximated as

Phase margin is 90 deg since the other high frequency pole doesn't affect the phase margin. A 90-deg PM doesn't have ringing and overshooting but trades off speed. But I think that's fine.

So it seems that the first approach did work well without the need for the source follower and the compensation network.

Here comes my confusion. I do not know as to why we need to consider those added parts while approach 1 worked out fine. Could anyone please explain as to how the second approach can be better than the first (if it's better at all)?

I think compensation is only required if the phase margin's dropped less than 45 as the result of subsequent stages, or if we want good unity gain bandwidth (?). But I do not see any good reason to invoke compensation in the above circuit.

Good question! Your DC analysis is correct, but your AC analysis lacks the frequency effects associated with M1, M2, M3 and M4, including those due to the reverse transfer capacitance. The phase shift associated with these will vary depending upon which FETs are chosen, but at some frequency your phase margin will be degraded to the place where the circuit will oscillate. The compensation circuit will roll off the gain before you reach this frequency.

Why is frequency compensation required here?

Theoretically this compensation is not required. However, general practice of application of operational amplifiers has come to necessity of internal "compensation", which is essentially an intentional screw-up of an amplifier. This is done in industry for half a century now, to reduce instabilities in closed feedback applications. The detailed explanation of reasons can be found in every textbook and in this TI white paper, which says in part:

Approach 1 is good to drive capacitance loads, however if you drive resistive load it will reduce the output impedance of the amplifier and hence the gain.

Approach 2 has the source follower which acts as a buffer and you can drive both capacitive and resistive loads with the gain being the same.

0
Transfer function of a real operational amplifer
7
Should I be concerned when loop gain rises back above 0dB on simulation?
6
Loop compensation design of buck converter
0
Negative feedback and op-amp poles
0
butterworth configuration of multi-stage amplifier
1
Regarding Miller compensation