I have a project which is proving to be more challenging due to my limited knowledge of electronics.

I am installing a homemade central vacuum system. It uses 12 V signal from the outlets to operate a 230 V vacuum cleaner. Plug the hose in, make the circuit, start the vacuum. Unplug the hose, the motor stops.

I have a solid state relay which switches it perfectly.

I wondered if there was a way to keep the vacuum running for 20-30 secs after the outlet has been unplugged, to clear any debris in the pipework?

I was thinking of possibly using a capacitor on the 12v circuit but have no idea how to calculate the size I would need!

You may be able to find commercial, off the shelf (COTS) devices. This site isn't for that purpose. But to answer your question, yes. The following schematic shows one basic approach (there are always others): 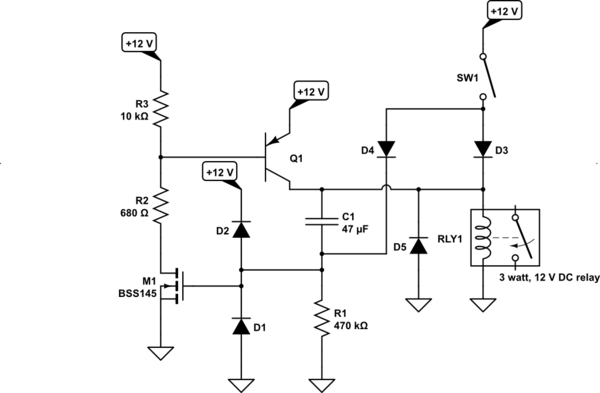 \$Q_1\$ can be any of a number of small-signal PNP BJTs capable of supporting the relay current (I assumed \$250\:\text{mA}\$ here.) You didn't specify your DC relay, so I may have over-specified its requirements a bit (many require less than \$3\:\text{W}\$ to operate them.) \$M_1\$ is shown as a BSS145. That's because I'm depending upon its threshold voltage for the timing (along with the values for \$C_1\$ and \$R_1\$, which collectively set the hold time you wanted.) However, again, any of a list of small-signal NFETs can do the job. But the timing may need to be adjusted by changing the value \$C_1\$ and/or \$R_1\$ to get the time you want if you choose a different one. The point is that pretty much nothing here is all that critical.

As already noted, the timing of the circuit depends upon \$R_1\$, \$C_1\$, and the threshold voltage of the NFET you choose.

\$D_1\$ is important, but \$D_2\$ can probably be eliminated if you don't want to add it (it helps protect the NFET gate, though.) \$D_5\$ is the usual free-wheeling diode for the relay inductance. You could use other methods (zener+diode, RC snubber, etc.) But you probably don't care how fast the magnetic energy collapses. So a simple diode is probably fine. \$D_3\$ and \$D_4\$ are required to hold \$C_1\$ while your switch is engaged (your hose is plugged into the wall.) Once you pull the hose out, the timing circuit will then be allowed to do its job and time out the period you wanted.

Be aware that there are SOT23 diode pairs, such as the BAV99 and BAT54A, BAT54C, and BAT54S, to check out. You can replace several pairs of diodes shown in the above diagram with one or two of those things. Again, this is your call.

Once your switch disengages, this releases the "grab" across \$C_1\$ that had been held there by the switch (through \$D_3\$ and \$D_4\$) and now \$C_1\$ can start to charge via \$R_1\$, gradually getting to the point where it forces the gate of \$M_1\$ below its threshold voltage. When that happens, the base current supply for \$Q_1\$ expires and \$Q_1\$ rapidly turns off. Now, the top side of \$C_1\$ finds itself slammed down to ground (and still more negative, limited by \$D_5\$) via your relay inductance/load. The bottom side of \$C_1\$ rapidly discharges via \$D_1\$, almost immediately resetting the entire circuit for another use.

As Hearth notes in a comment below, \$D_5\$ is only needed if a mechanical relay is used for switching your power on and off. Given an SSR, the above circuit is actually over-built, since I've assumed that I need to support driving up to \$3\:\text{W}\$. A typical SSR requires only a modest amount of current through an opto-isolator and the circuit could be re-designed to reduce the base current in \$Q_1\$. For example, \$R_2\$ could easily be increased to reduce that base drive.

Or you can just buy something commercial. I'm sure there's something out there. 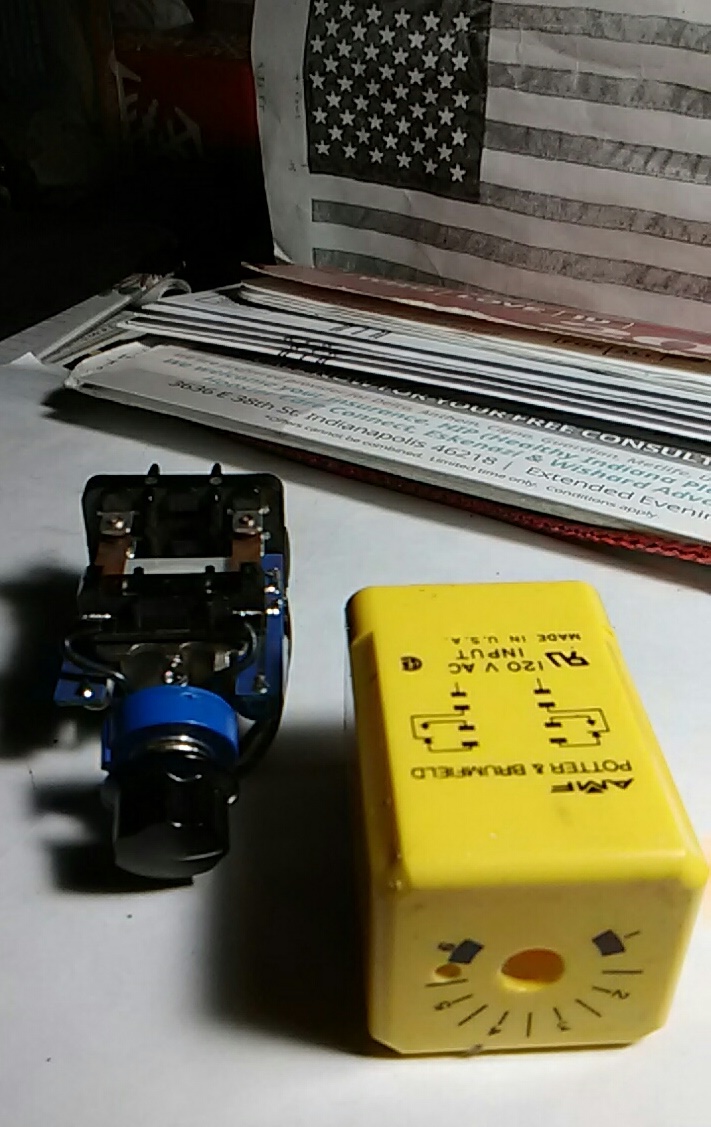 5
Does outrush current exist? If so, how do I handle it?
1
30 minute timer that has normally closed circuit. It goes off when timer activated
0
Intermittent Relay Issue
0
Building a network PDU with a relay?
1
How to elevate a solid state tube heater supply?
0
Mechanical or Solid State Switch for 48V DC and 2 Amps current
0
adjustable window and adjustable reset delay watchdog Timer