Quick question. Will this mono/stereo switch system work on my mixer panel?

So basically, I designed a mixer panel for monitoring my band when we play live. However, some of us play with a stereo in ear monitoring system and some of us use a mono speaker by their feet. I don't want things that are panned to the right not to be heard on the mono speakers when they are connected to the left output.

This means I need my mixer to have a mono/stereo switching system. I'm not sure if I want to use switched jack ports to have it automated. If I want that, how do I do that?

The other option is to make a button to switch the system to mono or stereo. This schematic I made very quickly and not very clean will do that? Or will it not mix both channels to the left output correctly? 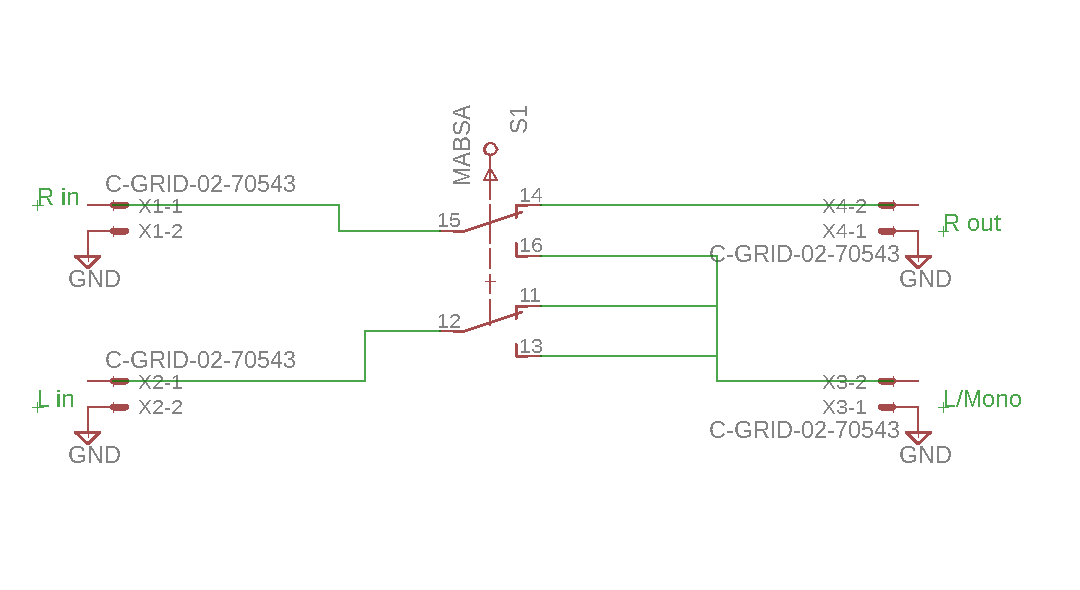 Your scheme is overly complex. First of all, the left input is always connected to the left output, regardless of the switch position, so you might as well just connect them directly.

And there's no reason not to leave the right input connected to the right output even if you're not using it, so just wire that through, too.

So the whole thing boils down to a single SPST switch that shorts the left and right channels together.

However, this might be a bad thing if whatever's connected to Lin and Rin have low source impedances, so it might be a good idea to include some series resistance between each of those jacks and the switch. The value of resistance required would depend on the load impedances connected to the output jacks, which you haven't mentioned.

An even better approach would be to add some unity-gain buffers between the switch and the output jacks. Then the resistance used for mixing won't depend on the load impedance.

Will it work - maybe. Your scheme relies on the left and right inputs being high-impedance if they are not you could get inter-modulation (which generally sounds terrible) when you switch to mono output.

I'd recommend a 1 kilo-ohm resistor in series with each input before the signals meet. You could put these on pin 16 an pin 13 of the mono-stereo switch. located there they would not participate in the signal path when switched to stereo.

Not the answer you're looking for? Browse other questions tagged switches audio or ask your own question.

11
How do those 3.5mm stereo to mono adapters work?
1
Detect 3.5mm stereo jack plugged in
0
3.5mm Stereo to dual 6.3mm mono. Would this work?
13
Accidentally downmixed stereo to mono, why does this work?
0
How do I create a subtractive or dffferential two channel audio mixer?
1
How best to split a stereo audio source (LR) to two stereo amps (LL+RR)?
1
Converting a headphone output to line level
0
What's wrong with this audio amplifier and stereo to mono circuit?
0
How to make a two channel mono mixer with in balance control into stereo output