I made a circuit which selects one of 4 sensors and determines if a valid data stream is present on that sensor and counts the number of times data is valid. I narrowed my problems to hardware.

In the original circuit, I did not include the LED and 100 ohm resistor in series (see thick wire in schematic) because I thought I didn't need it. Then I started adding it temporarily and everything seems to run more smoothly with it in.

I believe my problem exists because of some delay caused by the math resulting from the internal resistor on the micro's RXD pin plus the 1k resistor plus a capacitor somewhere in any of the IC's?

The reason I added the 1k resistor is because if by fat chance I ground the RXD pin via software and output W is high and I didn't have any resistor then I'd have a short circuit which I do not want.

But what baffles me is that I get success with the diode and LED circuit even though output W would return a high or low since the part is a 151 not a 251 or does that chip output still have a resistor in series?

My other thought is to replace the AT89C2051 with an AT89LP4051 but that's asking for more money and another programmer.

Anyways, other than my thoughts, Can I configure this setup hardware wise to allow a signal to pass through from the photo transistor to the micro via a multiplexer at a rate of 1 bit per 125us? (like change resistor values and/or add/remove resistors)? etc.

The supply voltage averages at 4.8V. 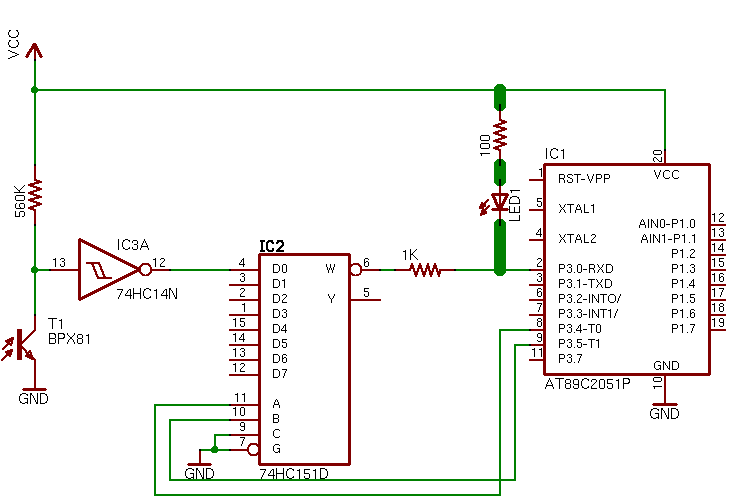 I have tried all of the following without success:

Now I haven't gone as low as 75 ohms for series resistance that someone pointed in their diagram but I'm still a little fuzzy. Maybe there's an entry in a datasheet I need.

Now I'm curious, considering this micro has (based on literature I read) GPIO pins in open drain format only, could I get away with removing the resistors and LED and replacing the series resistor with only one reverse-based diode (so anode connects to GPIO and cathode connects to multiplexer output)? If so, can I get away with a standard 1n4148/1n914 diode?

It's not entirely clear what you're asking, but I think you're trying to receive short pulses from the W output of IC2 into the P3.0-RXD pin of IC1, and you're discovering that 2ms pulses are detected at IC1, but 125uS pulses aren't.

the 1K resistor is far too large, especially since it's having to work against the LED and its 100 ohm current limiting resistor.

With that modification you won't be loading the output excessively.

If anything the LED pullup ought be 1k with no series R to expect good margin for Vol.

If you need an LED indicator with 100 ohms, use another inverter like the 'HC14 so as not to apply this much pullup current. 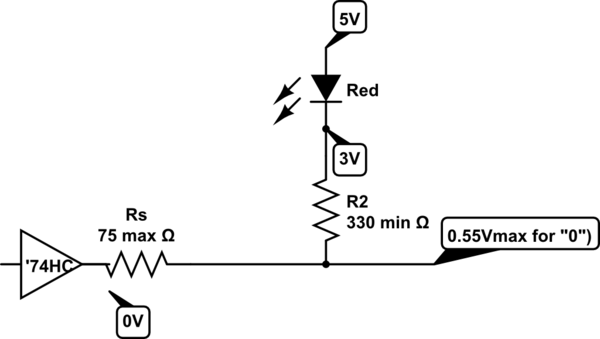 This optical design needs to use a path loss analysis with more precise Rx gain than a phototransistor such as a PD with an OpAmp for gain.

There are better ways if you define range and beamwidth.

Not the answer you're looking for? Browse other questions tagged microcontroller capacitor resistors infrared time or ask your own question.

1
Calculating resistor values for RPi circuit detecting AC current using H11AA1 and PNP transistor
33
Two black boxes display the same impedance at all frequencies. Which has the single resistor?
0
How to test if an IR sensor is broken?
0
Calculating a resistor for a transistor
0
Sensor range and speed based on resistor
0
Connect 10 LEDs using 5 volt current
0
How to properly utilize RPI 1391
1
Is it safe to directly connect an infrared led to an Arduino?
1
Which of these is the correct wiring of an RGB light strip with n-channel MOSFET for Arduino