Is frequency for dc zero Hz?

We know the frequency of a direct current is zero. The reason is that there is no repetitive pattern.

But I was stumbled when I noticed, why can't that straight line be cut into smaller pieces, and can we treat it as infinite frequency? I have included a picture below as an example 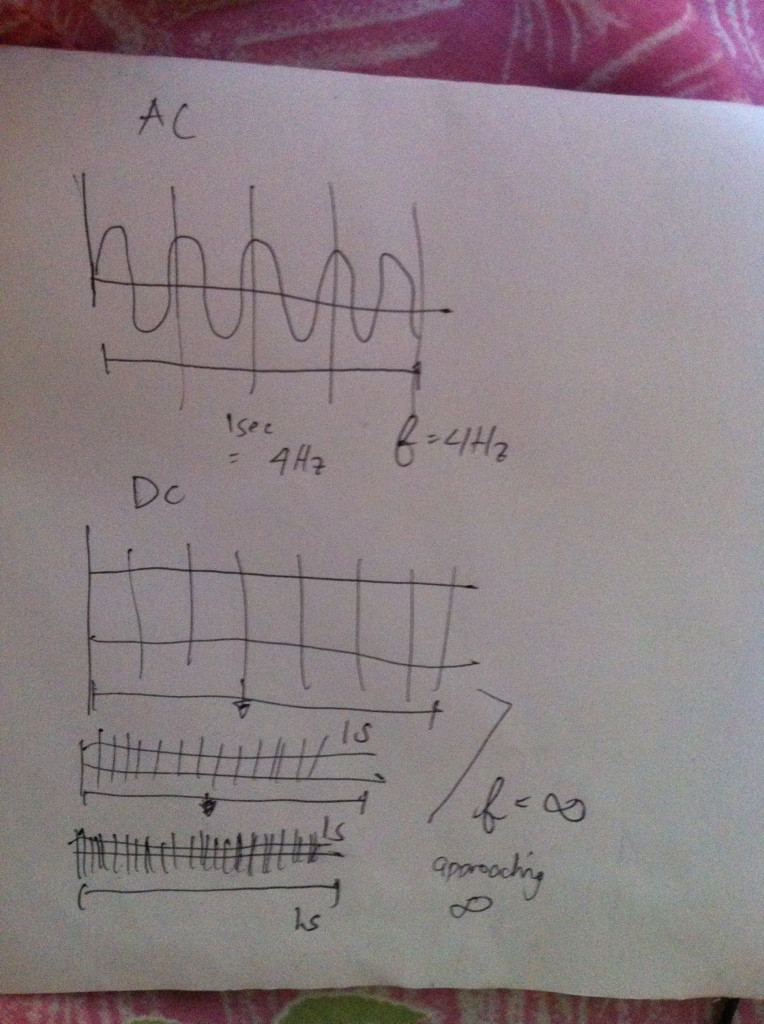 As you can see, with dc, that straight line can be divided into infinitesimal patterns/cycles, since the cycle can be seen as lines repeating over and over again.

Very clever, but that's not how it works.

By your reasoning you should not only be able to make the frequency infinite, but also 4 Hz, or 100 Hz, or \$\sqrt{2}\$ Hz, all at the same time, with the same signal. And that's why you can't do that: a repeating signal can have only 1 fundamental frequency, which is 1/period.

It would be the same as taking 2 periods of the 4 Hz sine and saying that that's the period, because it also repeats, and then the signal would be 2 Hz. It can't be 2 Hz and 4 Hz at the same time.

Yes you can treat an infinite line as a repeating segment of some arbitrary wavelength to obtain a periodic signal. However, the function within this period is a flat zero. So if we look into the frequency domain of this periodic signal, we will see that it has no amplitude at its fundamental, nor any harmonics. They are all zero. If you like, you can pretend that the signal is of some frequency, any frequency you like, but zero amplitude.

Frequency is how often an event repeats itself over a set amount of time. A frequency of 1 hertz means that something happens once a second. In order to develop an intuition for really high frequencies and really low frequencies just consider the graphs of \$\cos(2\pi ft)\$ for different values of \$f\$.

When the frequency of a continuous periodic signal is large, you can expect to see a very spiky graph, as \$f \rightarrow \infty\$ the graph seems to sweep the entire area.

As you can see it does not seem like high frequencies have anything to do with DC which is the complete opposite.

When it comes to lower and lower frequencies, the \$\cos\$ function flattens out, taking longer and longer time before it starts to repeat. Thus it makes sense that when it takes \$T = \infty\$ amount of time to repeat, the function will always remain at a constant value.

You can try it out yourself and see how it looks.

This is why I think it would be correct to say that a DC current has a frequency of \$0\$ and a time period of \$\infty\$. So basically a DC signal never repeats, it takes forever to repeat.

This is further collaborated when you find that the fourier transform of the signal \$f(t) = 1\$ is the dirac delta function centred around \$0\$. Which means that almost all of the frequency amplitude is concentrated above \$0\$.

you can find the proof here

Now what I said above is one way to "construct" a DC signal. We can also do what you said, observe that the signal is actually periodic for any time period \$k\$, we can say that \$f(t) = 1\$ repeats every \$k\$ seconds and the pattern that is being repeated is a straight line of length \$k\$ parallel to the x axis.

But just like how while a sin wave repeats every \$2\pi, 4\pi, 6\pi, \cdots\$, we still say it's time period is \$2\pi\$ because that is the smallest interval over which the function repeats. This is because we only need to know the behavior of \$\sin\$ in that time period in order to be able to describe it fully over all time.

So in the case of this function \$f(t)\$, we need to choose a \$k\$ that is arbitrarily close to zero in order to find the smallest period over which the function may be described completely and this period is the fundamental period. The fundamental frequency is defined as its reciprocal.

If we conceptualize a DC signal in this way we find that \$T \rightarrow 0\$ and \$f \rightarrow \infty\$. But this is not a useful way to think about the DC signal because just as @kaz said, every frequency will be having \$0\$ amplitude. To understand why, consider the visual way of looking at the fourier transform and note that a DC signal when wrapped around would be a circle and the centre of mass will always remain at zero no matter how much you rotate it.

So to conclude we can think of the DC signal as being constructed out of line segments, but in that case we would have to distribute the frequency amplitude across an infinite range of frequencies causing no frequency to have any non zero amplitude.

Not the answer you're looking for? Browse other questions tagged current dc frequency or ask your own question.

27
Why does a capacitor block DC and not AC?

7
What is the unit for resonant frequency?
0
Frequency design parameter for DC signals
0
Use of frequency multipliers for a signal with DC component
0
What happens for DC frequency of a signal when frequency doubler is applied to a signal?
0
Automotive alternator: zero crossing detection (frequency)
2
How to find the source of a noise in a particular band
2
Why is the output frequency of the zero crossing detector (square wave generator) double that of the input signal?