As a preface I am just a hobby electronics enthusiast and not an electrical engineering student, and I am just starting out at that, so these may be obvious answers for even a first year student.

So an LED with a forward voltage of 2V connected in series to a 9V battery will require a current-limiting resistor to drop 7V.

If multiple resistor-LEDs are connected to the battery in parallel, the voltage is the same across each "junction."

So the voltage at points A, B, C, D and E should all be 9V? Therefore again each resistor is dropping 7V and each LED 2V.

My question is, what would happen if 5 LEDs were connected in series? I think we can use one resistor as the current in a series circuit should be the same at all points, but if we used a 9V battery and each LED had a forward voltage of 2V, what happens with 5 in series?

As the voltage drops in total are more than the voltage provided by the battery, would each LED drop one fifth of the 9 volts in (all else being equal)? As the voltage in minus the voltage out must equal zero, this is my guess as to what would happen, and that if that voltage was below the "operating forward voltage" of each LED then they just wouldn't light?

I know that if they were resistors then each one would have a voltage drop proportional to its resistance to the total resistance in the series circuit, but as LEDs aren't resistors presumably they wouldn't necessarily behave as such? The textbooks I have read don't tell you you need to "calculate" the forward voltage of the LEDs, you just go by the component datasheet.

Apologies if my questions are a bit all over the place, I am just trying to understand what is going on here.

The forward voltage is the voltage drop across the diode (LEDs) if the voltage at the anode is more positive than the voltage at the cathode (if you connect + to the anode). It is not a fixed value. Coming back to LEDs, the brightness of an LED depends on the amount of current passing through it, which is a function of the voltage across it. Typical IV (Current-Voltage) curve for LEDs looks something like this 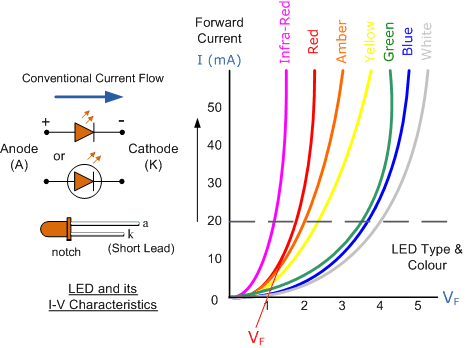 In your case, the value of 2V represents a voltage drop across LEDs for some typical current, say 20 mA which is required for rated brightness of that LED(You have to refer datasheet for exact testing condition and values). This number will help you decide how much voltage your circuit will need to supply to the LED. If you have more than one LED connected to a single power source, these numbers are really important because the forward voltage of all of the LEDs added together can’t exceed the supply voltage. If it does, like you have asked then simply the LEDs will be dim/ won't glow at all. In your case mostly they will be dim.

You don't have enough voltage to bias them all fully on, therefore your diodes will all be off. There will be a small amount of current through them, and the voltages will be approximately equal across each one, but you won't see them light up (or if you do, they'll be dim). It won't be a fifth of 9V though, because some will drop in the resistor, too.

This method of many diodes in series with a single current-limiting resistor (or other current limit device) is actually quite common; you see it all the time in LED lightbulbs. Since you need fewer resistors (which waste some energy as heat) it means higher efficiency, and on top of that it's a lower cost since there are fewer parts.

For further reading, try the search term "Shockley diode equation". There is a mathematical relationship between diode current and voltage, it's just nonlinear.

As the voltage drops in total are more than the voltage provided by the battery, would each LED drop one fifth of the 9 volts in (all else being equal)?

No they would NOT equally share the battery voltage of 9V. The LEDs will all have minor differences (even if all the same type) and at very low currents that difference would be seen as a Vf voltage variation between the LEDs.

Most LEDs are not characterized at extremely low currents, but a typical Vf/I curve might look like this WL-SMCW SMD RED LED: 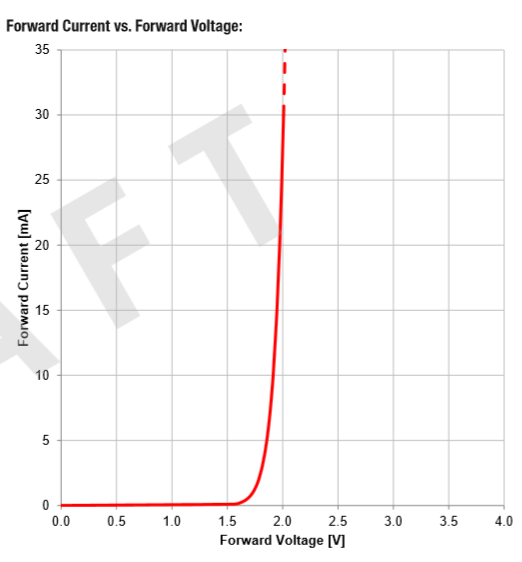 Notice that the forward current is extremely low below about 1.6V and rises exponentially from there. Below 1.6V you'd have to guess but might expect only 10's of uA current flow.

With the voltage reduced to 9V you could measure the Vf of each LED in the string and the voltage drop across the 125 Ohm resistor. However the voltage across each LED is likely to vary by many mV between the LEDs even if they are well matched. In a string made of unmatched LEDs, the difference could easily be as high as 100mV. Even more marked than the VF differences, the luminosity (brightness) differences will be easily seen at low currents.

You could easily try this experiment yourself and measure the Vf of each LED at a low current, and with a variable power supply you could build the Vf/I curve for each LED in the string.

When you buy 'binned' parts such as LEDs, the matching is done by selecting small groups of Vf range and luminosity at a fixed current and temperature. Typically matching is within 50-300mV for Vf.

You might find this article on Binning to be helpful.
This datasheet for Cree LEDs is very detailed on the binning for their XT-E LEDs and will give some idea of the range of VF values.

Not the answer you're looking for? Browse other questions tagged led voltage-divider or ask your own question.

10
Why is LED lighting up despite Supply voltage < Forward voltage