How to condition supply voltage for project

I am working on a circuit that is powered by a regulated 5V external power supply.

However, since I will be directly powering a Micro-Controller from this 5v supply, I was wondering how I should 'condition' the voltage from the power supply.

In other words, what circuitry do I need to implement between the 5V output of my power supply and the 5V VCC line of my Micro-Controller?

Obviously I can't pass the 5v from the power supply through a 5v regulator, so I was wondering if there is any other simple alternative to ensure the voltage from the 5v PSU remains at a constant 5V.

As a @Hearth says, your PSU should do most of the work. You should add some decoupling capacitors around your µController, and you can also (although it's exceedingly unlikely that you'll need it) add a filter (ferrite beads between the psu and the decoupling, or a ferrite with a couple of turns on the +ve and -ve leads bringing in the power).

If you're worried that your PSU might give you too much voltage and damage your circuit, you can add a crowbar circuit. Like the following: 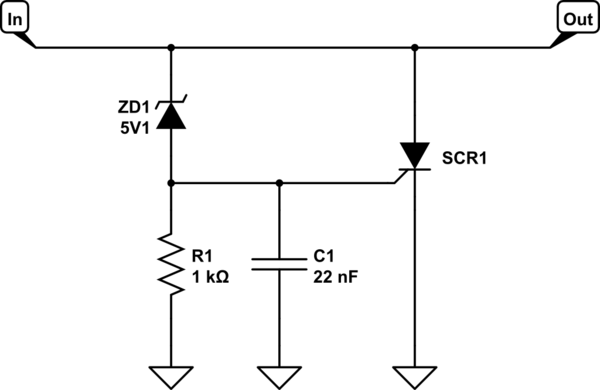 This will short out the output of your PSU if the voltage gets too high (people often add a fuse in the input so that the crowbar blows the fuse when it triggers).

For a simple microcontroller, a Schottky diode on the input, (or a reverse biased diode between +ve and -ve), is usually all you wnat. (to protect you from someone who gets the power the wrong way round)

Not the answer you're looking for? Browse other questions tagged microcontroller power-supply pcb-design low-power or ask your own question.