What are these gaps in PCB polygon pours near vias of the same net?

When adding polygon pours to a power layer on my PCB in Altium Designer (v17), I'm getting weird clearance gaps near vias. The poly and vias are connected to the same net. I'm new to Altium, so I'm not sure what's causing this. 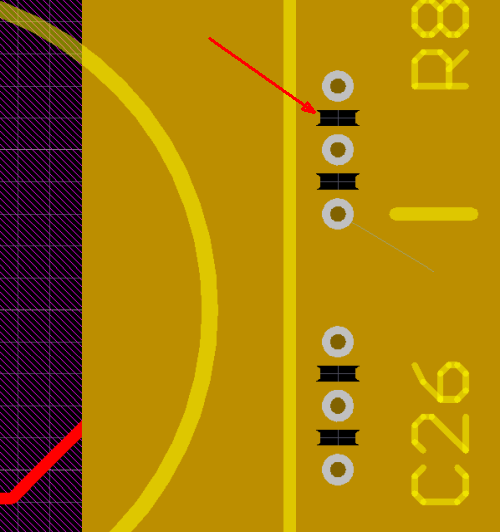 I put some vias near the edge of the poly to try and figure this out:

I suspect there may be a design rule affecting it, but I am not sure what to look for.

What should I check in Altium that controls gaps around/near vias on polygon pours of the same net?

Go to Design -> Rules, look for a Polygon Connect Rule (NOT a Plane connect rule).

In that rule, make sure that "Direct Connect" is selected. Confirm, then leave that dialog. Repour all polygons (T->G->A). Now, check if you can still see those holes.

I have a feeling that these come from a thermal relief connect (which is setup in said rule), overlapped by tracks.

Not the answer you're looking for? Browse other questions tagged pcb-design altium via copper-pour or ask your own question.