I am wondering why the signal that was traced on my oscilloscope started on a negative slope when the trigger slope = rising.

I displayed a 10kHz sine wave and the triggering pulse at the same time, making note that the function generator DUTY control is in the CAL position.

Can someone explain why the displayed sinusoid on channel 1 began at the negative-slope portion of its slope even though the trigger slope was set to rising? It remained the same whenever the setting changed to falling. 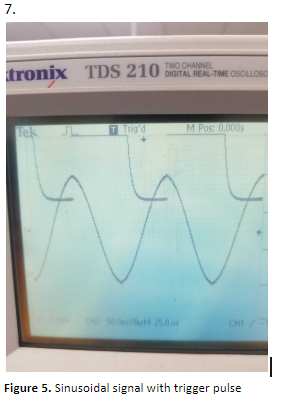 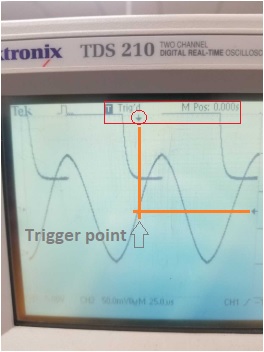 At the top of the screen appears text M Pos: 0.000s This tells you that the trigger point is exactly at the centre of the screen (equidistant from the display left edge and right edge). This display is very useful for measuring time spans: its number will change as the trigger control moves the downward-pointing arrow left or right. It displays a signed number of seconds, milliseconds, microseconds, nanoseconds between cursor and centre-of-screen. When the downward pointing arrow is at screen centre, its display is 0.000s.

The black T along with Trig'd tell you that the 'scope circuitry has successfully found a point on the waveform (of the proper slope) on which to trigger.

At the right edge of the screen is a left-pointing arrow. This arrow slides up and down, adjusted by the trigger level control. It controls the voltage level of the trigger point (as marked on the photo by the orange horizontal line). As this trigger point is moved up, the sine wave would shift left a little on the display. If the trigger voltage moves above its topmost peak, the 'scope becomes untriggered, and the nice stable display goes all squirrelly. The black T would also change, indicating that the display is untriggered.

Coordinating all these knobs, displays takes some time to master. Much thought has gone into making scope measurements versatile yet simple - two conflicting issues.