I thought about the following simple input stage: let the input be applied across a resistor (\$R'\$) with the desired input impedance followed by a unity-gain buffer (which has a high impedance and therefore wouldn't affect much the input impedance). Then, take the output of the buffer and process it through an HPF filter (and later through LPF). However when I tried to implement the buffer using emitter-follower I quickly ran into some problems. 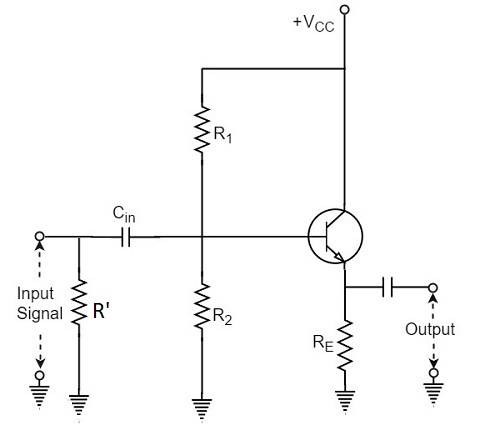 In order to establish a proper biasing of the transistor we have to have the resistors \$R_1\$ and \$R_2\$. Crucially, a coupling capacitor \$C_{in}\$ is required (otherwise the circuit just does't work properly - SPICE simulation yields extreme attenuation in the frequency response). But the introduction of this capacitor creates two serious problems:

What are some possible ways to alleviate these issues without over-complicating the circuit?

The transistor is an emitter-follower with a gain of about only 1. You will need a second transistor to provide the gain of 42dB which is a little more than 100 times.

The corner frequency \$f_c\$ is determined by \$C_{in}\$, and the parallel resistance of \$R_1\$ and \$R_2\$ (and for a small part the resistance seen at the base of the BJT). It can be found by analyzing the AC-equivalent circuit.

"Inside the frequency band" means for \$f > f_c\$, in which case the signal frequency is so high that the capacitor will act like a short-circuit in the AC-equivalent circuit. The input impedance is therefore constant in the bandpass region, and equal to the parallel resistance of \$R'\$, \$R_1\$, \$R_2\$ and the base resistance of the BJT (usually very large because it is bootstrapped).

Not the answer you're looking for? Browse other questions tagged filter bjt input-impedance emitter-follower or ask your own question.

4
Question about the derivation of filtering roll off
3
Low Pass Filter for 20 kHz PWM signal
0
Emitter-Follower Base Input Impedance
12
Design a filter that allows frequencies below 5 kHz to pass freely, but all frequencies above 5.2 kHz must be undetectable
1
Passive band-pass filter conceptual analysis
17
Why are oscilloscope input impedances so low?
5
Designing 2-stage BJT CE class-A voltage pre-amplifier with specified goals and without global NFB
0
RC filter for emitter follower input
2
How to calculate RC (in 2st RC low pass filter) that satisfies fc in real circuit?