I'm trying to convert an unencrypted PSPICE buck converter model (http://www.ti.com/product/LM2678/toolssoftware) from TI. I translated the top subcircuit based on these steps: https://www.analog.com/en/technical-articles/ltspice-simple-steps-to-import-third-party-models.html

But when I ran the circuit I received this error: 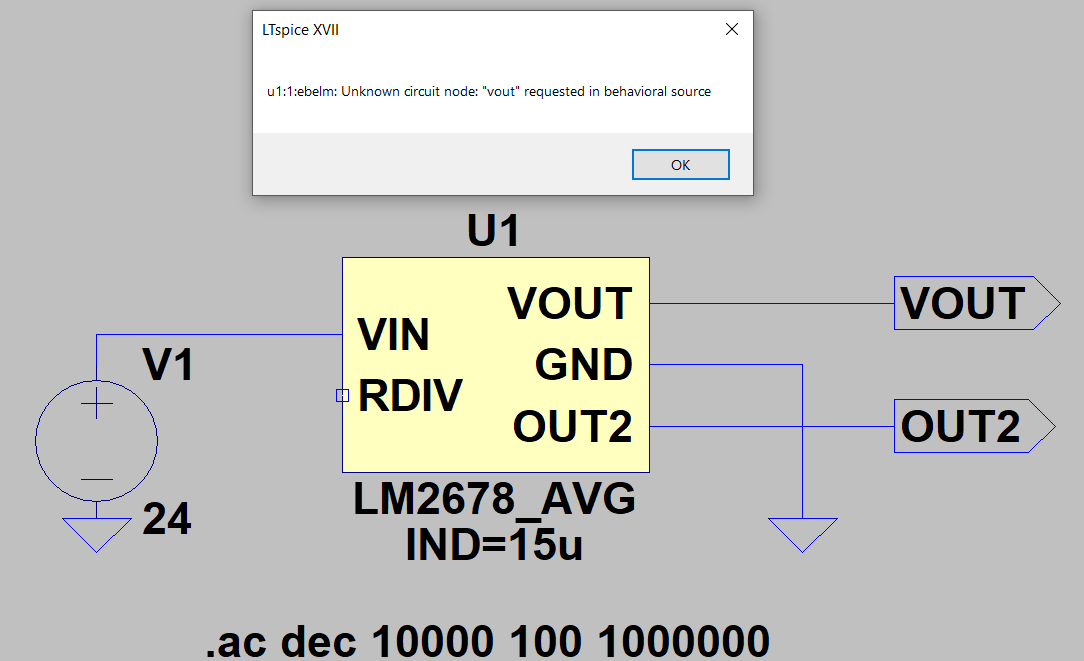 Rest of the subcircuits:

Do I need to convert all the subcircuits into symbols? I don't have much experience with SPICE but that method has worked for me for .lib files with a single subcircuit, what am I doing wrong here? Any help would be appreciated!

The error tells you there's something wrong with EBELM, part of U1, requesting a V(out). If you connect the unconnected pin (which is an input, btw), anywhere, to ground, through a resistor, or not, it will work. That's because the node has no internal connection to ground and it's conjured out of nowhere in the behavioural source. B-source because EBELM (in BUCKVM_0), though a VCVS, is written as the old two-pin SPICE code, with VALUE=<...>, which is transformed by LTspice, internally, into a behavioural source with appropriate expression -- see the error log by checking generate expanded listing in the control panel if you're curious. By leaving the pin unconnected, LTspice sees both the internal connection, and the external connection (outside the subcircuit and symbol) as floating, with no connection to ground, so the parser has no reference to it, and all voltages in SPICE need a reference to ground. Thus it cannot be called out of nowhere and by explicitly grounding it, or providing some connection to ground (1G resistor, for example), it creates a reference that can be used in the behavioural expression. If it sounds too fuzzy it's because it is, today is not a good day for translations.

In BUCKVM_0, the elements VBM and EBELM are connected to OUT1, but that node doesn't exist anywhere in the subcircuit, and the pinout only has OUT and OUT2. Since the expressions include the unreferenced V(out), the solver complains. Rename the OUT1 nodes to OUT (for both VBM and EBELM) and it will work, though I am not sure how, because you are using an .AC analysis card, but the supply (V1) is not set for that -- add ac 1 beside the 24, and it should work. However, if you want to study the loop gain, you may need a different setup.

Also, a small, helpful hint for the future: when you want to study the behaviour of some schematic that involves subcircuits, it's best to take your time and convert those subcircuits to hierarchical design, because that allows you to delve into the lower layers in a graphical mode, rather than strain your retina trying to decipher SPICE code lines. If, after you're satisfied with the way it behaves, you're willing to transform it back into subcircuits, it's easy to do it.

Not the answer you're looking for? Browse other questions tagged ltspice switching-regulator pspice or ask your own question.