Do BJT (Darlington) transistors have a minimum collector current? 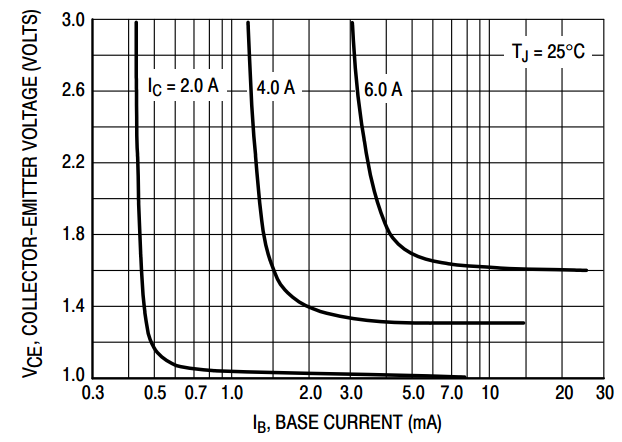 I am using a TIP122 Darlington transistor. From the graph provided in the datasheet, I can see that the saturation voltage decreases as the collector current decreases.

Since the load I am driving upstream only draws 400mA, can I assume that the aforementioned trend continues? That is, at Ic of 400mA, the saturation Vce voltage will decrease to below 1V?

Or do transistors have a minimum Ic threshold that disrupts this trend? I can't seem to find such a rating on the datasheet.

No, you can't assume that, at least, not in general.

A Darlington transistor pair operating at full gain has a minimum VCE that is a combination of the VCE(SAT) of the first transistor and the VBE of the second transistor. In order to conduct current at all, the overall VCE must be greater than the sum of these two. Any less, and the second transistor does not receive the base current that it needs.

But if you have that much base drive, then there's no reason to use a Darlington in the first place. You'd be better off overall using just a single transistor.

Not the answer you're looking for? Browse other questions tagged transistors integrated-circuit bjt saturation darlington or ask your own question.

4
What is Normalized DC Current Gain (as oppossed to DC Current gain)?
4
Reading BJT Transistor Datasheets. Two different values for collector emitter voltage?
1
Values for calculating PN2222A Base Resistor
0
Current gain characteristics versus Collector Emitter voltage. Where is the transistor saturated? Can a transistor be saturated with a VCE of -10V?
1
BJT Transistors - On Characteristics
0
Selecting a transistor - Reading transistor datasheets
0
Determine if a heatsink is required (Darlington TIP120)
0
Choosing emitter resistor