How to evaluate equivalent insulation resistance of two cables?

You have to think of the path the leakage current would take, I think the comments you received cover this mostly. 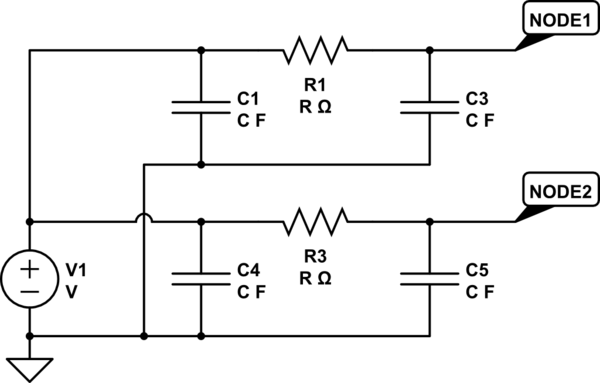 think of it like this imagine those two pi circuits are the cables, where the capacitors are the insulation at the start and the end of the cable and the resistor is the "normal" path for the current. Imagine you wanted to reach node 1 from node 2 or viceversa from the capacitors you gotta go through one capacitor reach the point where they have a common connection and then go through the other, so there is a path that goes through two capacitors so you can get from 1 to 2. This path would be the case that they appear to be in series and a voltage divider of some sorts will happen between them.

As one of the people in your comments mentioned if they are fully parallel cables so connect 1 and 2 in my schematic to, this reduces the problem of the leakage current only going through 1 capacitor to reach ground.

I have avoided using ground terminals on the circuit to make my explanation a bit clearer and there is purpose of using capacitors as "insulation" as well.

Not the answer you're looking for? Browse other questions tagged resistance insulation or ask your own question.