I bought some time ago a 2nd hand Philips PM 3253 including probes which shows on the oscilloscope probe inputs:

While the probes I got with it show:

They seem to work fine though.

However, I would like to use them on the Philips PM3110 which shows on the probe inputs:

Also here it seems to work.

However, I would like to ask if I can expect problems/safety/malfunction issues when using the probes on the PM3110 oscilloscope.

You'll be fine. The +oscCap basically means to add the scope pF value to the probe pF value.

The pF rating of a probe/scope doesn't ever cause safety/malfunction issues, but it will affect probe loading on your device under test.

One point not yet mentioned, is the limited range of the compensation adjustment on passive scope probes. This can sometimes be an issue when mixing & matching passive probes and scopes.

The compensation range doesn't seem to be stated for the x1/x10 probes you have. However, note that the two oscilloscopes have different input capacitance values: 20 pF on the PM3253 and 30 pF on the PM3110.

Now looking at a basic Tektronix P2220 passive x1/x10 probe (datasheet) (just chosen as an example, because it's a common probe with a trustworthy set of specification information): 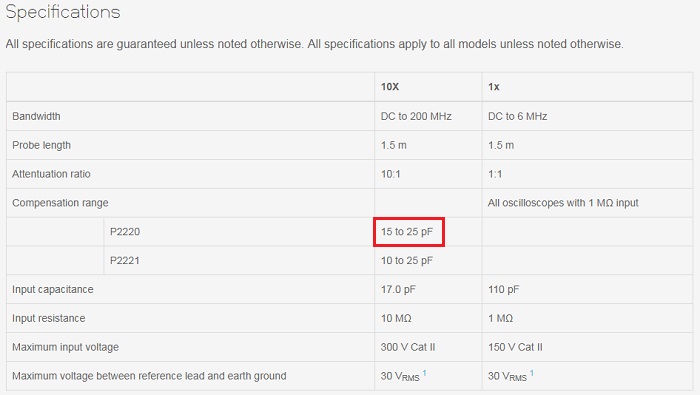 We see that the P2220 probe compensation range is 15 pF - 25 pF. Therefore it would not be suitable for using with the PM3110 scope which has a 30 pF input capacitance. It would not be possible to adjust the compensation capacitor on that probe, to match the 30 pF capacitance of that oscilloscope's input, and so you would have distorted waveforms. This could count as a "malfunction" on your list of concerns.

(As another example, we can see that the P2220 is also unsuitable for using with the Tektronix MSO/DPO2000 scopes, which have 12.5 pF input capacitance. Those scopes are supplied with P2221 probes instead, which can compensate down to 10 pF, as shown in the screenshot of specifications above.)

Summary: There is no guarantee that random probe A can be correctly compensated for use with random scope B. This needs to be specifically checked.

For common probe types with a single, manual compensation adjustment, always ensure that the probe can be adjusted so that you see the proper square waveform shape, when using the scope's test signal. If in doubt, refer to the scope and probe manuals.

1
How to measure RF power with an oscilloscope?
0
Differential ADC - voltage on probes
4
Is my oscilloscope working or not?
1
Oscilloscope makes my mains (fuse box) group go down
0
How to get dynamic changes on a Philips PM 3253 oscilloscope
3
Oscilloscope probe compabitibility
1
Prevent oscilloscope scrolling
16
Why are oscilloscope input impedances so low?
0
Single ended scope probes on equipment under test which ARE on an isolation transformer