Transistor Inverter - when does excessive small wattage become a problem?

I'm trying to choose the best values of resistors given the stock I have so that I can deliver sufficient power and current to an HM-TRP radio module.

The main problem I have here is that when I used a simulator to measure current, Its registering between 197mA and 203mA, yet I want to provide the HM-TRP radio module enough current so it can function.

The problem with those current values to me is when I calculate wattage, it (according to the datasheet I found) exceeds the maximum value by approximately 25mW. 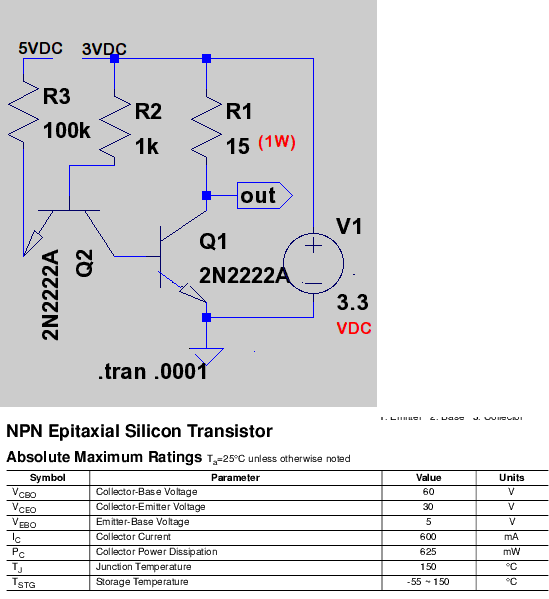 Your requirement to simply switch 3.3V and let it draw up to 120mA for Tx=20dBm.

The circuit you have shown will not do this.

You could drive the base with 10% of IC to achieve the rated Vce(sat) with a PNP, but then you drop 3.3 by thus much so it not so good a solution to reduce the Tx power as using a power logic level PFET with an RdsOn of 0.1 Ohm

You could also use a fixed 3.3V regulator instead that has an enable signal.

Not the answer you're looking for? Browse other questions tagged power transistors heat heatsink watts or ask your own question.

5
Understanding and Changing Transistor Oscillator Circuit
2
When does Direct Source-Drain tunneling become a problem?
4
Need help calculating resistor values for IR LED Driver
0
Controlling pull-up pins from external circuit
2
Does a 24V inverter consume the same amount of wattage as a 12V inverter?
0
SIM900 Power On/Off Circuit
0
Determine the values and power rating of the resistors to bias the transistor
0
Transistor heating up problem
0
Photoresistor power switch for arduino, does this look correct