Was my circuit victim of capacitor self-resonance?

In order to generate a short pulse off a permanent constant current signal, I made this circuit. It works well except that it created a very high frequency ripple which wreaked havoc all over the prototype board, not just the output, and brought the voltage of the entire board from 5V to 3V, sometimes less.

The frequency was so high that my 200Mhz oscilloscope couldn't see the wave but I could see that the line was very thick.

I solved the problem by adding a 15pF cap (C2) between the output and ground. Now the signal is perfect. Before, when my circuit had problems, it was the same, just without this cap. There was already a 330K resistor to ground and I thought that would be enough to avoid this type of interference.

I think that the voltage drop was due to other ICs being pulsed extremely fast albeit at undefined levels. Before finding out where the problem came from, the symptoms were not clear: The board worked as expected. Then the next day I changed something apparently not related and it started working unpredictably.

Is this phenomenon common? Should I be concerned about other flaws in my circuits which could be the cause of this? Or was it what is called "capacitor self-resonance"?

The triangle on the left is a Schmidtt trigger. I can't confirm if the same effect would appear if the signal source came from another ic or a power supply directly.

The board is a composition of three 595 shift registers, schmidtt triggers, a 557 clock, 2 or 3 mosfets and a bunch of schottky diodes. It's powered by a linear regulator, itself powered by a 15V power supply. Changing the power supply to a completely different one didn't change anything. All the ICs have decoupling caps, which I think have also no effect as far as this board is concerned. Adding them didn't produce anything visible.

There isn't much difference between the two (they are right on top of each other), however there is probably much more going on with the design. I'm willing to bet you have one of the following problems: 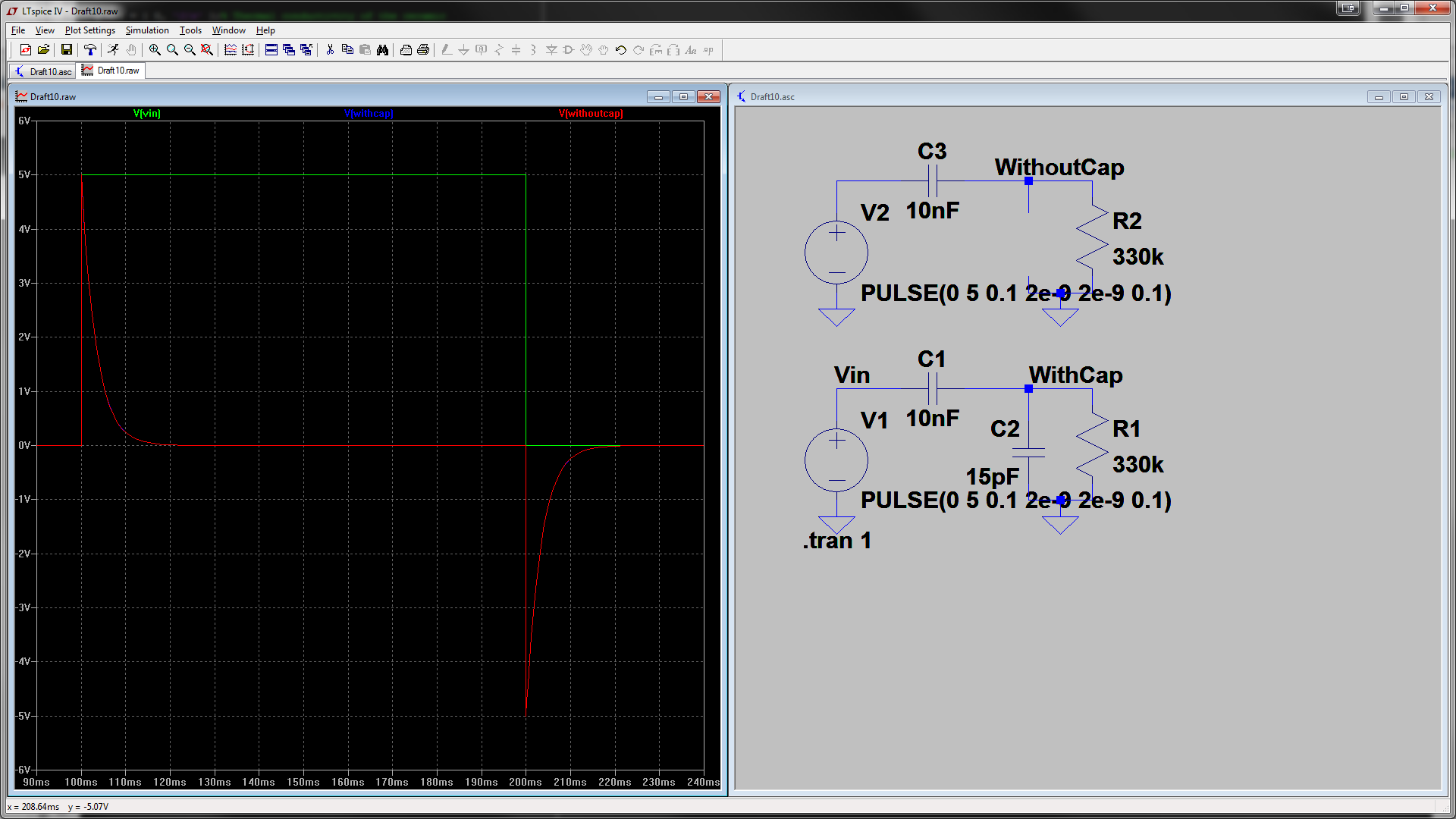 2) Vcc has a large amount of parasitic inductance, or not enough local storage for the IC's with power filter caps.

The problem is the things you can't see. On the schematic we commonly draw Vcc and ground as one net. When the circuit is built we connect ground and Vcc with conductors, these conductors have resistance and inductance (and between them capacitance). Usually when you have these wierd problems, it's because you have too much inductance, and you've built and RLC filter with the resistor being the load the C being a power filter cap and the L being a wire to the IC.

Make sure you use large conductors and avoid daisy chaining Vcc and ground. Each IC's current should have a direct pathway back to the power supply, otherwise you'll have common mode problem.

Another thing that could be going on is the voltage regulator could be improperly compensated, check the datasheet and make sure you have a proper filter capacitor on the regulator.

Its not unheard of for high-speed discrete CMOS logic to self-oscillate if the source impedance is very high. Parasitic capacitance between the output and input terminal can form a relaxation oscillator.

Not the answer you're looking for? Browse other questions tagged capacitor digital-logic filter resonance schmitt-trigger or ask your own question.

2
See my prototype electronic board w/connectors. Is it acceptable as a commercial product by Western standards?
6
Self resonance frequency for MLCC capacitor
0
Use of a capacitor to accomodate temporary voltage drop
2
Self-resonance frequency of MLCC in Buck converter circuit
0
Smoothing Capacitor for Voltage Sensor
0
How do I connect up a replacement run capacitor
9
Full bridge driver capacitor ringing problem
1
Why does adding a capacitor greatly improve this circuit?
0
Will a parallel capacitor placed before a series inductor be capable of self-resonance?