Adjusting duty cycle without affecting frequency of a VCO

I've looked around the internet for a simple voltage controlled oscillator that is able to produce various waveforms in phase with one another. I asked about it in this site and was directed to a dual opamp integrator/comparator setup, of which a voltage-controlled version can be found in this schematic (from breadboardadventures.com) 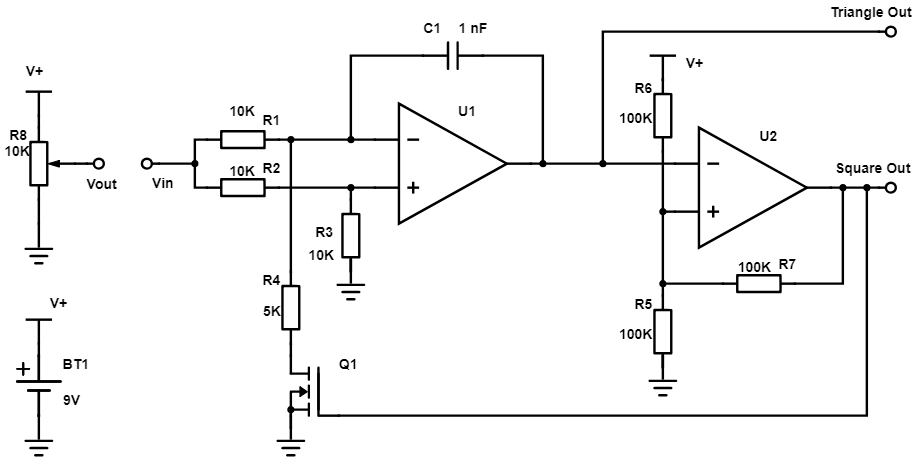 I constructed this (except for the n-MOSFET switch, which I've replaced by a NPN due to lack of parts) and it seems to work as intended. However, I'm interested in controlling the duty cycle of the generator. I ran it in a simulator, and as expected, changing the ratios \$R_1/R_4\$ and \$R_2/R_3\$ (within reasonable limits as to not invert the integrator polarity) gives me different duty cycles, as well as different asymmetries for the triangle waves. Placing a pot in that position would do what I wanted, right? Well, no. Since it directly changes the slope of the integrator curves, it alters the oscillation frequency of the entire system. That is something which would be a hassle to adjust accordingly in the control voltage.

How could I adapt this circuit to adjust duty cycle and other parameters simultaneously using a single external control, in order to keep the oscillation frequency constant?

Given a perfect triangle wave, then follow that with a variable-threshold comparator which outputs your desired adjustable duty-cycle-rectangular wave.

Not the answer you're looking for? Browse other questions tagged operational-amplifier oscillator comparator integrator duty-cycle or ask your own question.