Motor/MOSFET does not react to input on breadboard 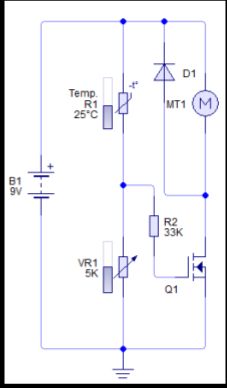 I have tried so many different variations on breadboard of this circuit but the motor seems to just be powered by the power rail on the breadboard. It does not react to any change in the input and seems that the whole input is redundant to the MOSFET. (The MOSFET that I am using is WH50 2N7000.)

Essentially, if the thermistor is increased and exceeds the threshold of 25℃, the motor activates. If below the threshold, the motor will not operate. Theoretically it works but on breadboard it does not. Is there any reason for this?

This circuit is really a bad design and much too simple to work properly as it will turn on/off the MOSFET only gradually, that is a bad thing as that will cause current to flow through and a voltage to be present across the MOSFET. As P = V * I that means Power is dissipated in the MOSFET. Not a good thing. Even worse with an 2N7000 which cannot handle much power.

What is needed is an abrupt switch on/off of the MOSFET.

Also the 2N7000 by far isn't powerful enough to drive a motor. You should use a MOSFET which has a maximum current rating that is a lot higher than the 2N7000, it can only handle about 200 mA. Much less than what most motors require. Also see this question.

So probably you have already damaged that poor 2N7000. You really need a better circuit.

Here's an example using some CMOS inverters between the resistors and the gate of the MOSFET. As you also don't want the motor switching on/off constantly around the tripping point you should use schmitt-trigger inverters which will add hysteresis. 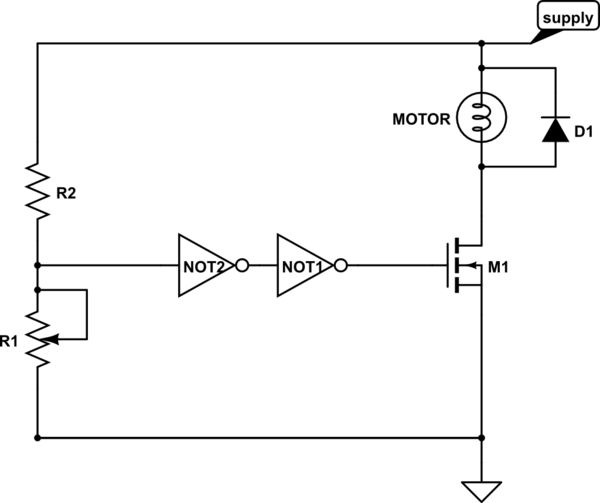 Not the answer you're looking for? Browse other questions tagged mosfet motor input thermistor or ask your own question.

0
P16NF06 MOSFET not triggering with 3.3V
0
Mosfet motor problems with bluetooth module
5
MOSFET not turning off
3
Why does this common-source MOSFET amplifier work?
1
Why doesn't my 555 + MOSFET setup drive my motor?
1
Voltage regulator does not start if driven by mosfet
0
Complimentary N - P mosfet circuit does not fully turn off
1
Raspberry Pi not Compatible with Mosfet?