Hello I'm new with VHDL and I'm trying to implement a JK latch in VHDL using this RTL schema: 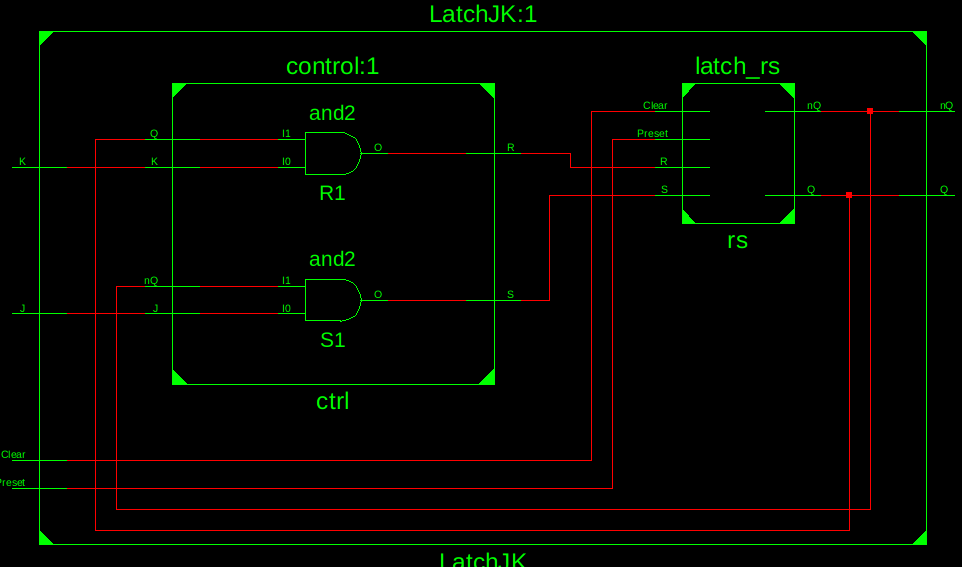 The problem is that during Post-Map simulation the feedback signals (Q and nQ) seems to be consumed by the and port: is this possible? And if so, how can I avoid this to happen? (the clear 0 sets nq to 1)

EDIT: During the Behavioral simulation the circuit is working fine.

This depends on your netlist.

You have a glitch (should be on S) somewhere, which propagates through S1 and is already compensated for the Q1 but not the Q2 at the time it reaches the latch implementation.

Regarding that beautiful latch:

Since you tag with Xilinx, you're probably synthesizing for FPGA's. These don't have latches but will generally infer a flip-flop with a multiplexer somewhere. That's in case of an RTL latch description though (for example a variable or signal that is changed on a clock flank but not reset). In order to try and conform to the delay nonsense, some tools will try to brute force this with buffer-LUTs. I'm not familiar enough with ISE (which you also tagged) anymore to know what its strategy will be there.

Not the answer you're looking for? Browse other questions tagged vhdl xilinx latch ise or ask your own question.

8
Why does this simple VHDL pattern for a shift register not work as expected
1
Problem in synthesizing
2
VHDL latch for Xilinx Spartan 3E
0
VHDL Overmapping and Time Constaint issues in Xilinx-ISE
2
What is the difference in assigning output before end process and after end process in VHDL
3
Does a package exist to carry out intense string manipulation in VHDL?
3
VHDL Component Instantiantion Failure, Entity or Architecture wrong?
3
VHDL: Use a type, dependent on entity generics, for other entity ports/generics
0
multiple source error