I'm trying to connect a timer output wirelessly to another circuit. These are on two separate power lines (different phases, circuit, long distance), so I thought of connecting them wirelessly, I'll use a standard low cost remote controlled switch which have separate on and off push switches.

Ultimately, the power change should be detected directly from the timer's output which is 240v AC.

The output signal can be either separate wires for on and off signals, or a single wire with positive and negative trigger for on/off.

See the diagram below for better explanation. 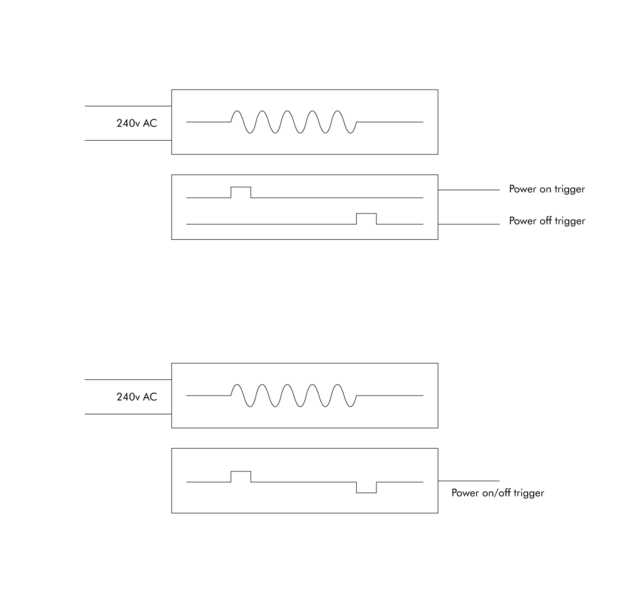 You can use a current transformer around one of the mains wires to sense if current is flowing in it. Here is an example of one that clips on...

Whenever there is AC current flowing the mains wire (timer is on) then an AC voltage will appear across the output of the transformer. Depending on what you are trying to do, you can connect this output to a rectifier + cap and then to a transistor gate if the voltage is high enough, or to an op amp if you want adjustable turn on current threshold. You can also add, say a 555 timer in one shot mode if you just want something to happen only when the timer turns on (or if the timer is controlling an inductive load like a motor, just set the threshold high enough that the transistor only turns on when the motor first starts).

Not the answer you're looking for? Browse other questions tagged power mains trigger or ask your own question.

2
How to improve this Power ON/OFF circuit?
1
Switching / dimming a high power mains heater
0
Any Ideas for Understand one of the 3 phases has powered
0
Turn off power strip when another circuit is turned off
0
555 Timer Monostable Mode Self Triggering
1
Why does this Edge Trigger Work on input of 555 monostable config?
0
Adding Transistor to Maintain Voltage Across Proprietary Switch
0
Should I use a separate power supply or separate grounds in this scenario?
1
Need to turn on a relay for half a second when constant power is applied with a switch