How to correctly use a set of pogo pins?

Following the excellent recommendation to a previous question of mine (on what to use when I want to connect to a board without soldering), I got hold of pogo pins.

How to use them correctly, when in a set?

Specifically - how should they be "put together" in order to be at the right distance between each other for a typical board?

I built the abomination below to have a straight series of them at the right distance (it works but this is really artisanal): 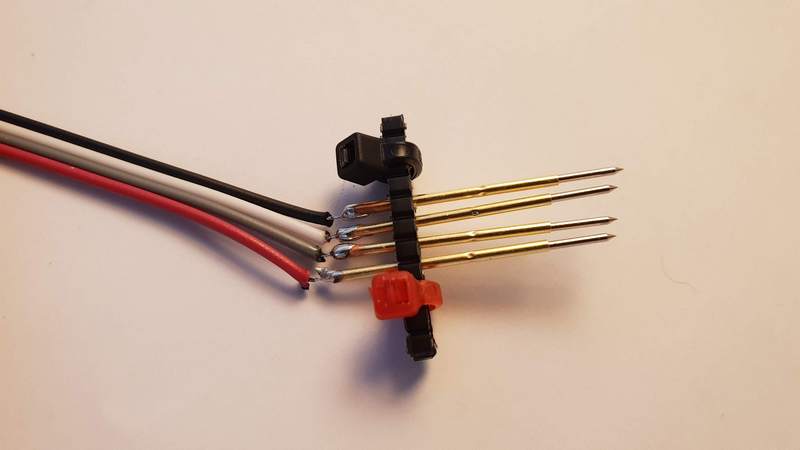 Are there "holders" (for a lack for a better word) for them? I was hoping that I could squeeze them into a breadboard but they are too big for that.

There are three parts to your puzzle

While you can solder directly to pogo pins, they are wear items and easily bent or broken, so serious production fixtures tend to use pogo pin sockets in which the pins are replaceable. These can often most easily be sourced by doing a search on the part number, for example a P75 pogo uses an R75 socket. There are at least two types of sockets - solder tail, and what is basically a wire wrap post (or if spaced in the right array, possibly a header pin). Pogo sockets have a ridge on them and so need to be inserted into whatever holds them from the pin side - which means that if you pre-wire them you need to thread the wire through the hole and then insert the socket, so you have to do that before putting a connector on the far end of your wire or combining it into a bundle. You can typically make the solder joint small enough, thread the holder through the fixture, and then put a piece of heat shrink over the joint; you can also buy sockets prewired to lengths of wire.

Production fixture traditionally use holes CNC drilled in a piece of acrylic or similar plastic. If you don't have ready access to that capability, two viable alternatives are using a common thermoplastic filament 3d printer (in which case you will almost certainly have to ream the holes to size afterwards) or using a stack of multiple purpose-made PC boards. If you go with multiple boards, consider putting a spacer in between so you increase the vertical distance over which you are fixturing the pins (essentially, treat a 3-piece prototype PCB fab as a CNC machining service that EE's are already familiar with sending jobs to, with the added benefit that you can have traces from the pogo plated through holes to a connector which you install on one board in the stack to bring off your wiring harness)

Far east factories operating in a semi-manual mode seem to fixtures where the pogos in their carrier are lowered from above via linear bearings riding on rails and actuated by a toggle clamp of the sort you might see on shop cart casters. In contrast, small batch US makers tend to have the pogos sticking up from a fixture with some alignment pins over which the board is held, possibly secured by a toggle clamp.

For small numbers of pins as you show you can also make up a simple cable ending in a head with a few pins in it, and hold that in place during a brief flashing operation (but such solution probably won't support enough signals for a full test, only programming and say serial output). Tag Connect offers a pre-made form of this for a few pin counts and spacings, the idea being that you design the board to their pogo head rather than designing a custom pogo fixture for your board.

Generally speaking these are used most for a testing application, however if you do choose to use pogos you might want to look at a target connector such as 858-10-005-30-012000 and mate with something like 868-22-005-00-011101 Just an example, however there are more options in spring connectors. There are also board to board connectors which is a fixed connection.

This is the solution that I came up with for programming and debugging a board with a ARM JTAG. There's six through-hole pogo-pin connectors on the bottom board, which work against pads placed on the bottom side of the board opposite of the surface-mount 100-mill connector you see on the top. It's all located by a pair of 2-56 machine screws; I needed to engineer the spacing of the pins and the size of the pads so to account for all the slop.

This was before I found out about this place, which makes these nifty little pogo-pin debug/programming cables. I'm not sure if they're still out there, or if they have competitors -- but you could probably make one up with 3D printed parts if they cease to exist. 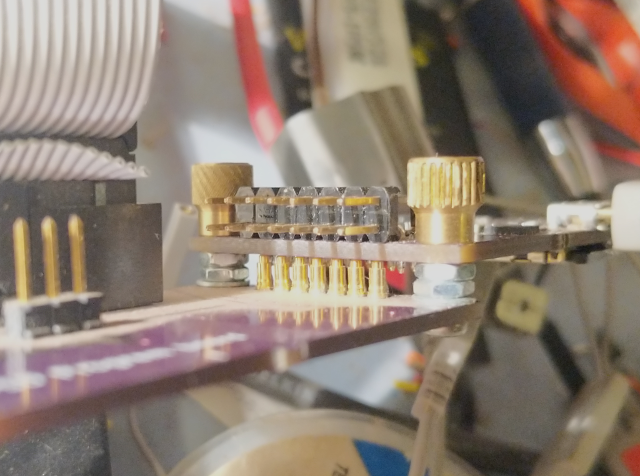 Not the answer you're looking for? Browse other questions tagged connector soldering prototyping or ask your own question.

11
ICSP or Pre-Programmed Microcontroller
1
Is there a device which replaces soldered pin headers?

25
How do I solder headers so that they always stand straight up?
2
Solder 4 switches off postive pole + fuse
4
Soldering on keyboard controller circuit board
3
PCB Reflow in oven, will solder melt before VRM's, caps etc get damaged?
1
How to use 0.1 inch header footprint for high speed signals?
6
Probably overheated black color SMD pads
1
Why use a concave vs. flat mating target for pogo pins?
2
How to solder these tiny pogo pins?
0
How to mount a narrow component on breadboard?